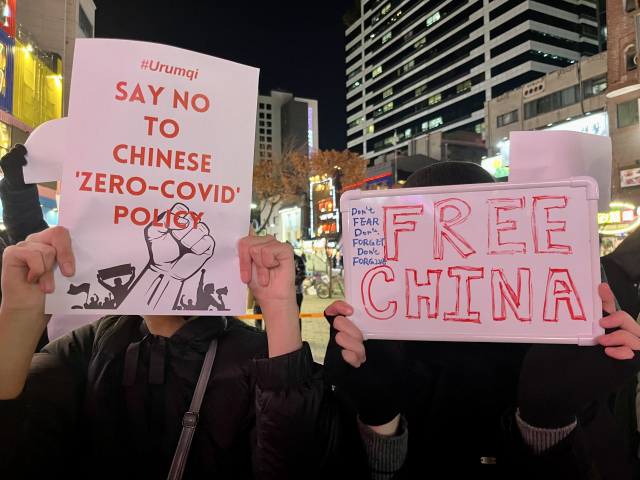 Chinese protesters in their 20s hold signs in support of the China's city Urumqi and that say, “Don’t fear, don’t forget, don’t forgive.” They declined to be interviewed because they feared they could be identified by the Chinese authorities. (Kim Arin/The Korea Herald)

At minus five degrees Celsius on Wednesday evening, when the first cold wave warning of this year was issued, more than 200 Chinese and Koreans gathered for the first time to denounce Beijing’s zero-COVID policy and to demand President Xi Jinping to step down.

The unprecedented uprising was the first protest by the Chinese against its authorities in Seoul amid ongoing “white paper” protests in mainland China in a symbolic protest against censorship. The protest was led by Chinese students studying in Korea, but some Koreans also participated.

The protestors began to gather at around 7 p.m. around the bustling Hongdae area in central Seoul, holding white papers and flowers. After placing chrysanthemum flowers and candles on the floor to commemorate the fire victims in Urumqi, the capital of Xinjiang, China, the protestors gathered in a circle.

They held papers written in either Korean, Chinese or English. In Korean the paper read, “We support the resistance against Xi Jinping,” “We support our Chinese friends.” In English it said, “Stand with protestors in China,” "Good bye Xi Jinping,” “Dictator out,” “Free China.”

Another paper read “We commemorate victims in Urumqi.” Last week, a fire broke out in an apartment building in Urumqi, the capital of Xinjiang, killing at least 10 people. Xinjiang is an ethnically divided region that has been under an intense government crackdown aimed at Uyghurs and other Muslim minorities. The apartment was blocked for over 100 days.

When more than 100 people gathered, they denounced Chinese authorities for failing to handle COVID policies, demanding freedom and democracy and even calling for the removal of Xi Jinping.

Most Chinese protesters wore eyeglasses, sunglasses, masks and hats to cover their identity. 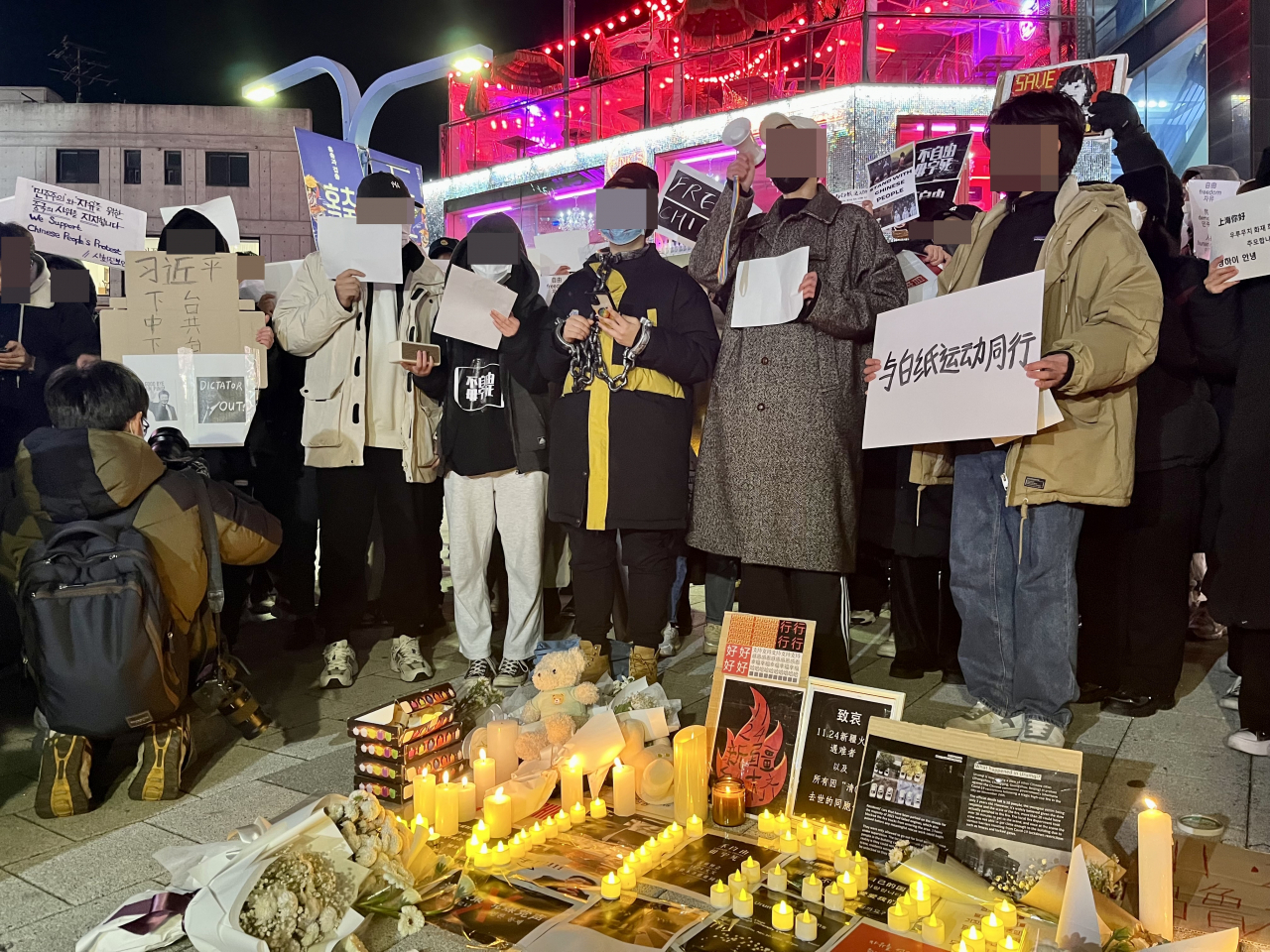 Protesters on Wednesday chant: “We want freedom. We want democracy. Down with dictatorship.” One protester in the center is dressed in shackles to represent the repression of freedom in China. (Kim Arin/The Korea Herald)

A 30-year-old Chinese student doing her doctorate here said she came to pay tribute to the victims of the Urumqi fire. She said she lost her uncle and aunt in the last two years due to the lockdown.

“They were sick, but they couldn’t get to the hospital because they had to stay home,” she said. “That’s why I’m so mad.”

She said that she and her parents moved to Korea about 10 years ago, but all of her relatives were still in China. “So I know what’s happening and I’m worried for them.”

But this protest wasn’t just about zero-COVID. She said she hoped for a bigger change for her home country. “Everyone thinks it’s ridiculous that Xi Jinping is continuing tenure,” she said.

She said she believed the protests erupting in the wake of the Urumqi fire “would put huge pressure on the CCP (Chinese Communist Party).”

“There are students joining the protests in other parts of the world, like in Japan,” she said. “It’s important to continue this momentum from outside of China. People in China can only do so much because it’s so repressive there.”

Frustration and anger against Xi as well as the Chinese Communist Party were palpable.

“The CCP is a very bad government,” said another man in his early 30s who came to Korea earlier this year to study.

“I was in China until not that long ago, and things are really bad there. I don’t think outsiders realize how bad things are,” he said. “People are dying trapped in their homes. Their doors were sealed so they couldn’t escape the fire.”

He said that as a Chinese man, he “envied Koreans.” “They have freedom. They can say what they want,” he said. “We have a crazy man as our president in China. He is a dictator.” 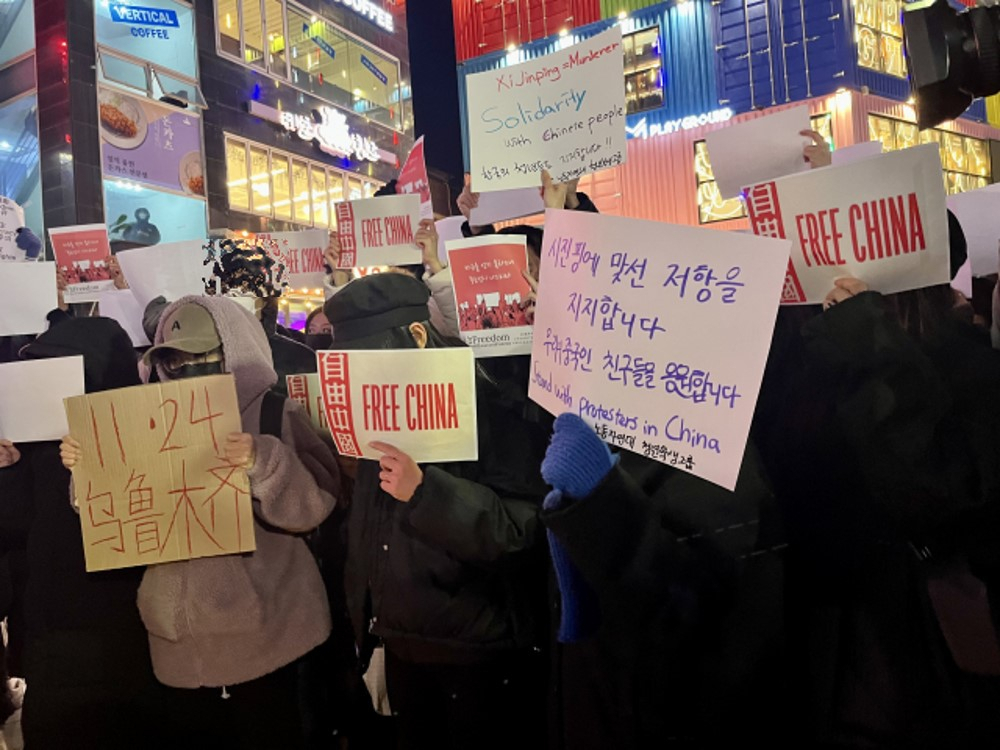 Signs reading “We stand with the protesters in China” are displayed by Korean students, Wednesday. (Kim Arin/The Korea Herald)

A 25-year-old student, who came to Korea five years ago, said he “can’t understand the Chinese government … Why are they doing this? They can’t make people live like this.”

He said that his friend in Shanghai was recently accosted by the police for just standing nearby the protest. “In Shanghai, the police are randomly checking people’s phones like in subways and stuff.”

Some protesters declined to be interviewed out of fear of retaliation. “My family is in China, and I’m worried our authorities will retaliate if they find out I was here,” said a woman in her 20s. She was wearing a face mask and a large hat, like many others at the gathering.

She said the Wednesday gathering was a “kind of a spontaneous gathering.” “That’s why we don’t have a Korean interpreter, and, like, it isn’t very well-organized. But I think everyone did their best.”

Some were less convinced that the wave of protests would lead to a change.

“To be honest, I don’t think the protests are going to change things much,” said a Chinese man, 30, who has been living here for five years.

“But I still wanted to come to show that people in China are not alone. There are a lot of brave people in the world who are standing with Chinese people.”

Demonstrators plan to continue the protests in other parts of the nation, including Busan and Gwangju. 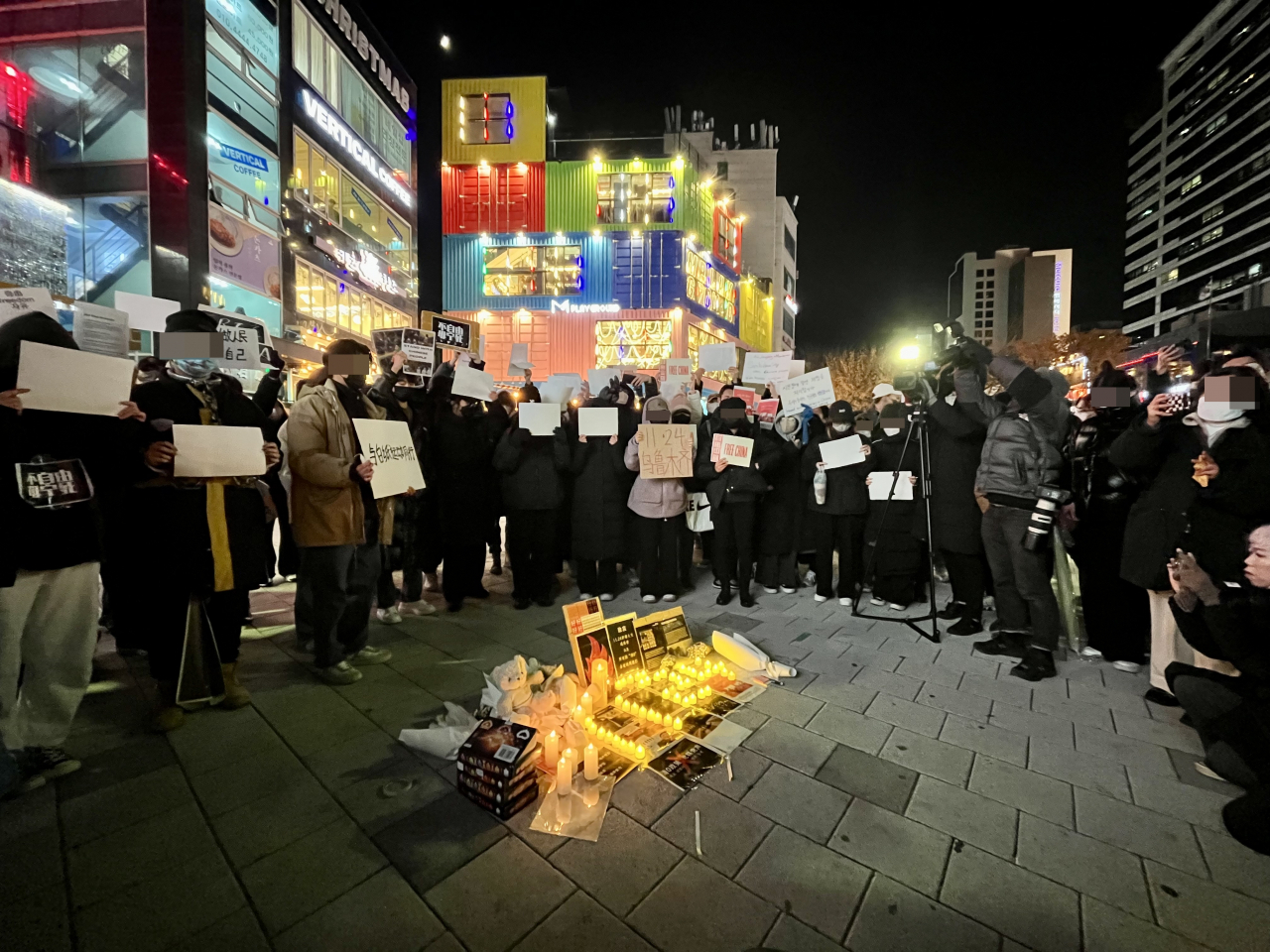 Protesters gather around an altar set up for remembering the victims of a recent deadly fire in Urumqi, the capital of Xinjiang Uyghur Autonomous Region in China, Wednesday. (Kim Arin/The Korea Herald)

The “white paper” protest began in mainland China as citizens’ dissatisfaction accumulated over the past three years due to the strict lockdown implemented by the government pursuing “Zero COVID” policies. Due to the long-term lockdown, some areas have run out of patience as they cannot get food or medicine.

The images of maskless fans in the Qatar World Cup have further frustrated Chinese, who saw a world that has moved on from masks and lockdowns. Chinese state broadcasters later replaced close-up shots of maskless fans waving flags with images of players.

Chinese authorities warned of a “resolute” crackdown on the protesters and security forces conducted spot-checks on the streets of major cities. In Beijing, hundreds of armored vehicles with flashing lights were parked along city streets.

The rallies are taking place in the US, UK, Canada, Japan, Hong Kong and Taiwan. Governments around the world are carefully observing the situation and expressing concerns about the harsh crackdown on peaceful protests. 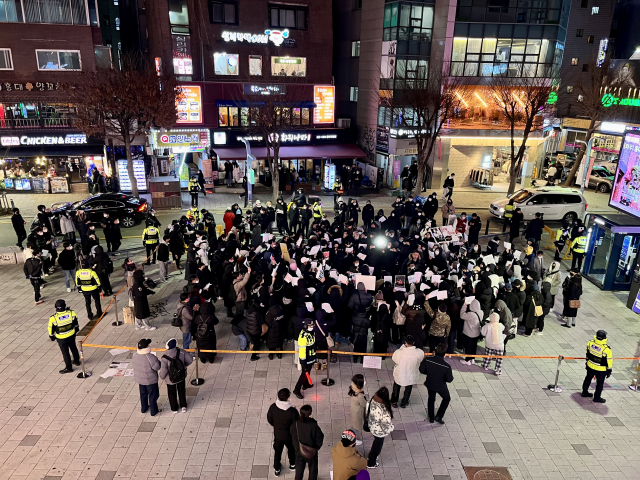 This photograph taken at around 7:50 p.m. on Wednesday shows protesters gathering in Hongdae, western Seoul. Police said the demonstration was registered as being around a 100-person event. (Kim Arin/The Korea Herald)

"I think any country where you see people trying to speak out, trying to speak up, to protest peacefully, to make known their frustrations -- whatever the issue is -- in any country where we see that happening and then we see the government take massive repressive action to stop it, that's not a sign of strength,” US Secretary of State Antony Blinken said. “It's a sign of weakness."

Canada Prime Minister Justin Trudeau said everyone in China should be “allowed to express themselves,” should be allowed to share their perspectives and indeed protest. German President Frank-Walter Steinmeier said in a recent interview that he “understands why people want to voice their impatience and grievance on the streets."

The Yoon Suk-yeol administration is treading carefully in its response to the "white paper" protest.

When asked by The Korea Herald whether the Korean presidential office has any statement over the rising concerns about China’s crackdown on the peaceful protests, the spokesperson said the office has “no particular position."