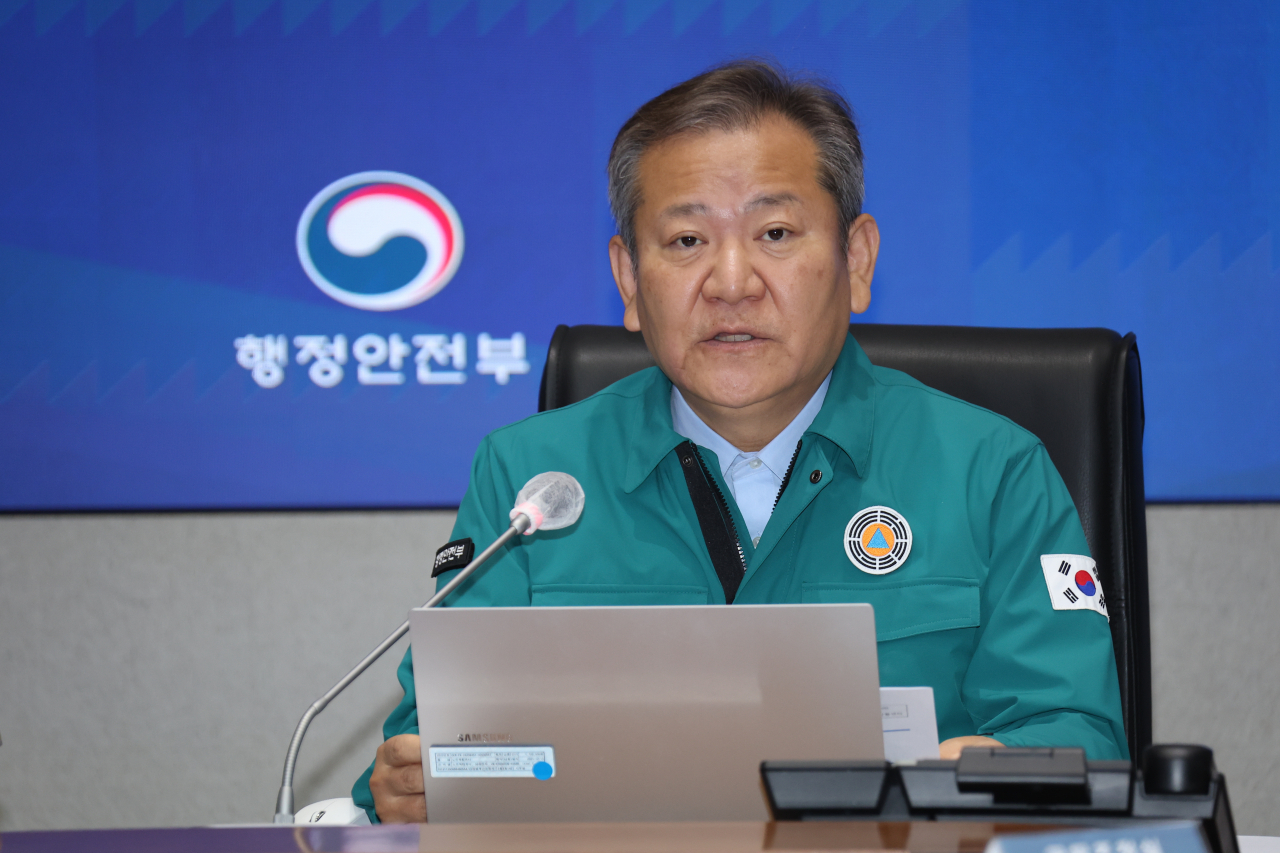 Minister of Interior and Safety Lee Sang-min speaks during a government briefing on Wednesday. (Yonhap)

Pressure is growing for Lee Sang-min to leave his post as minister of interior and safety in the wake of the deadly Halloween crowd crush, with the main opposition Democratic Party of Korea on Wednesday threatening to file a motion to impeach him if he doesn’t step down.

The Democratic Party leadership held an emergency meeting on this day and decided to pass a proposal to dismiss the safety minister at the plenary session the following day on Thursday. If the safety minister doesn’t resign himself and President Yoon Suk-yeol fails to act in a week’s time, the party said it would open a bill to impeach him.

“We’ve waited a month since the disaster that claimed so many young lives in the middle of Seoul. That’s enough time already,” the party’s floor leader Rep. Park Hong-keun told reporters.

“With the power entrusted to us by the Constitution, the Democratic Party will submit a proposal for dismissal. If the president refuses again, we will be voting his impeachment next week.”

He said that dismissing Lee was the “command given by the people, and the bereaved families.”

“The families want the safety minister to go, and we as members of the National Assembly will be doing our job.”

The party floor leader also claimed that the safety minister, who went to the same school as Yoon, was being given a pass because of his “close ties to the president.”

This is the second proposal sought by the Democratic Party to nudge members of the Cabinet off their posts since the Yoon administration took office in May.

In September, the party, which controls the majority of the National Assembly, unilaterally passed the proposal to remove Foreign Affairs Minister Park Jin from office over the president’s hot mic incident during his US trip. Yoon declined, saying the foreign minister wasn’t at fault.

On the opposition’s insistence in firing Lee, Yoon’s office has maintained it would first watch the ongoing investigations before making a decision.

Separate investigations into the tragedy by the police and parliament are underway, with the Democratic Party now calling to launch a special counsel investigation in addition.

After the Democratic Party raised the stakes on Tuesday saying it would be introducing a bill to impeach the safety minister if he doesn’t walk, a Yoon official said the presidential office “may boycott the parliamentary investigation” in such a case.

Yoon’s office is among the institutions being investigated in the tragedy alongside the Seoul police, the top prosecutors’ office and the Safety Ministry.

Rep. Joo Ho-young, the interim chair of the ruling People Power Party, called the Democratic Party’s push to dismiss yet another Cabinet minister “bullying by the party with majority control.”

“The safety minister is already under the parliamentary investigation, which the two parties have agreed upon,” he said. “It’s been mere days since the investigation took off, and the Democratic Party is already demanding that the minister be removed.”

The families of victims who lost their lives in the tragedy have asked to meet with the leaders of the ruling and opposition parties in a letter submitted via Lawyers for a Democratic Party or Minbyun, to relay their requests regarding the parliamentary investigation. The progressive lawyers’ group has been working with some of the victims’ families.

Polls have suggested earlier that the majority of Koreans do not want Lee to stay in the Cabinet.