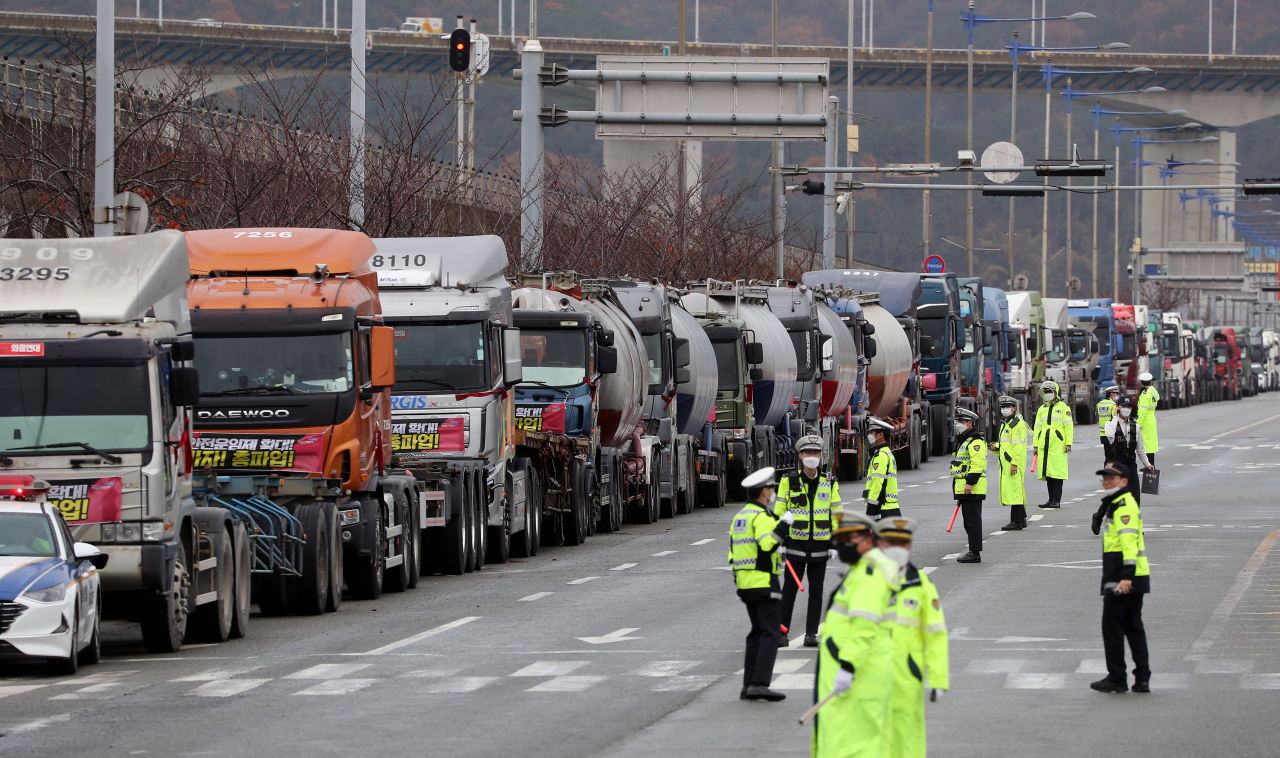 Cargo trucks are parked along a road in South Korea's southern port city of Busan on Tuesday, on the sixth day of a nationwide strike by unionized truckers. (Yonhap)

The advocacy groups representing cement, auto, steel, petrochemical and others made the call as the nationwide strike by unionized truckers entered its seventh day with no breakthrough in sight.

Thousands of truckers launched the strike on Thursday, demanding the government extend temporary rules guaranteeing minimum freight rates set to expire at the end of this year.

The strike is the second of its kind in five months. The government invoked a return-to-work order on cement truckers on Tuesday, the first time in 18 years such an executive order has been formulated.

"This is an unreasonable collective action. Our trade industry is again experiencing logistics difficulties at an already difficult time due to the global economic slowdown," Jeong Marn-ki, vice chair of the Korea International Trade Association (KITA), said in a press briefing.

"The truckers' union must immediately stop the collective action refusing to transport and come up with a solution that can be a win-win for everyone, including shippers, drivers and transport providers," Jeong said.

Jeong said the government and the National Assembly should not accept the truckers' demand as a way to "paper over the problem," calling for "rules-based, stern" action against any illegalities.

The government and the truckers held their first negotiations Monday but failed to narrow differences. The second round of talks is due to take place Wednesday afternoon.

The cement industry said the daily shipment has plunged to below 10 percent compared to the average due to the strike, incurring some 18 billion won ($13.5 million) in losses per day.

More than half of 459 construction sites under operation by eight builders has been affected by the strike since Friday, their association said.

The petrochemical industry said the daily shipment of product supplies fell to 30 percent, amounting to 68 billion won in damage a day, and some plants are expected to suspend operations as early as this weekend if the strike prolongs.

The auto sector said disruptions were inevitable in all areas from production and shipment to exports.

The business community claims that the freight rate system has done little to improve the overall work conditions for truck drivers but has jacked up land transport costs.

It called for an overhaul of the freight rate system and proposed adopting an alternative to calculate the rate based on more objective data on their income and fuel costs, instead of measuring them based on truckers' surveys.