“I nearly died from COVID-19 last year,” said the New York-based artist Kang Ik-joong in an interview with The Korea Herald earlier this month.

“For about a week, I couldn’t breathe well. Lying down didn’t help, sitting didn’t help,” he said. “So one day, I went out to the garden, opened my chest and began taking deep breaths like this,” he said, pushing his chest forward with his arms up wide open and looking upward. “I was able to breathe a little better when I opened up my chest, expanding the space,” he said.

Just at that moment, he caught a glimpse of a moon halo. “I saw the moon rainbow and, despite feeling very sick, all I could think was to take a photo of it, to catch it,” he said. The halo quickly disappeared. “I saw it again and tried to capture it but it quickly went away,” he said.

This was an "a-ha" moment for the artist.

“What I realized then was that we can’t lock-in happiness, we can’t capture joy. All I need to do is just look at it, like looking at the moon,” he said. “I felt foolish that I had thought of capturing it,” he said.

After that epiphany, Kang slowly shifted to painting moons. “I had been a little too caught up with moon jars,” he said.

Just as the moon series was begun serendipitously, so was the moon jar series.

In October 2004, he floated a ball measuring 15 meters in diameter that was made of children’s paintings on an artificial lake in Ilsan, about an hour west of downtown Seoul.

Strong winds damaged the ball less than a day after it was installed and was no longer perfectly spherical. Looking at the “deformed” globe, Kang’s immediate thought was that the project was ruined.

“But then it struck me that the ball looked like a slightly tilted moon jar,” Kang said. Moon jars are created by joining two hemispherical halves and thus look swollen in the midsection with a narrow opening and a narrow bottom. This “imperfect” shape is appreciated as a unique beauty of moon jars. 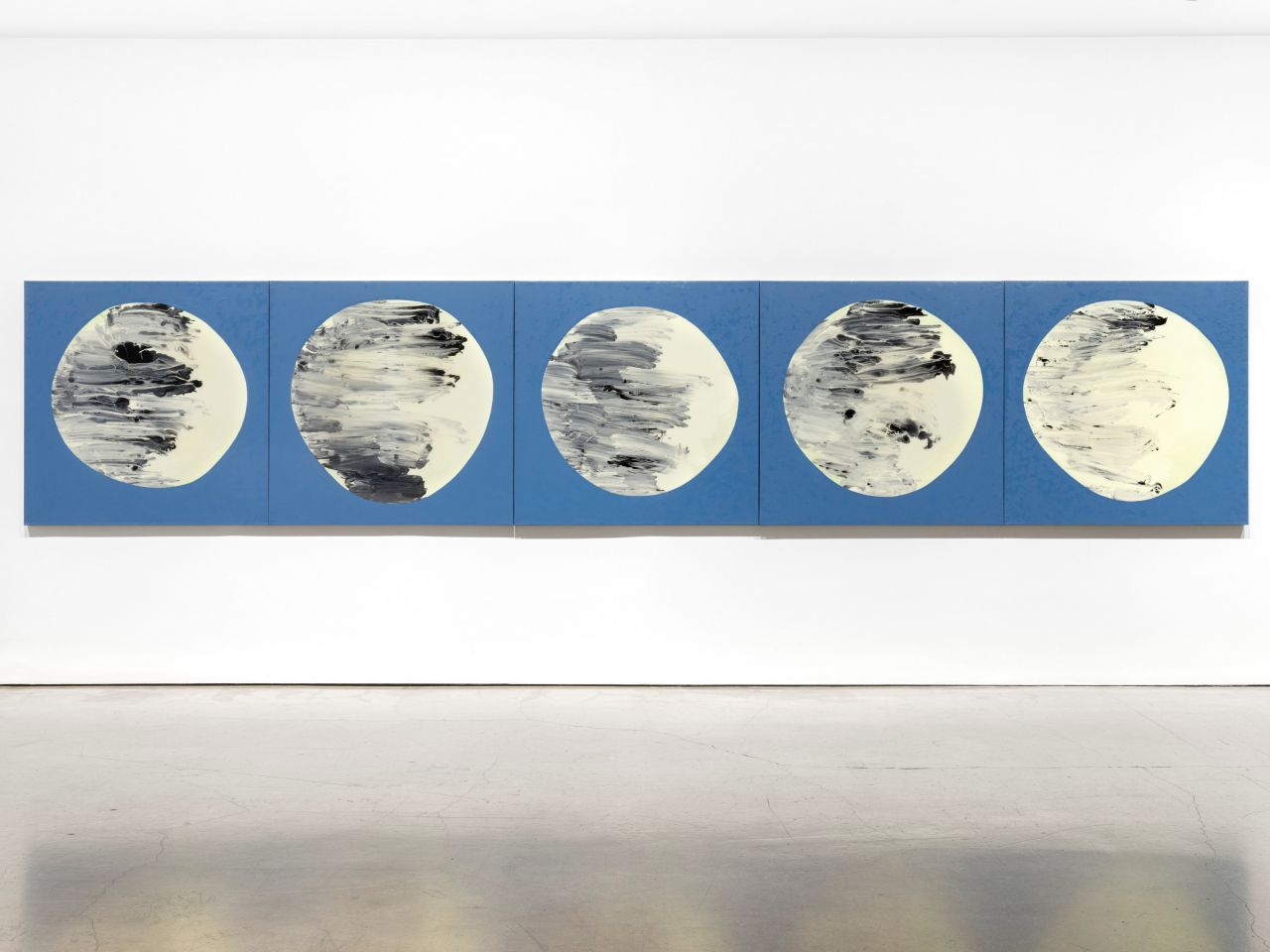 Kang’s moon series is part of the solo exhibition of the artist’s works at Gallery Hyundai, titled “The Moon is Rising.” It is his first solo show in 12 years.

It is the end of one cycle and the beginning of another, Kang noted. “Twelve years form a single cycle,” Kang said, referring to the 12 zodiac signs that represent each year. As for the title, it came from a dream he had of a huge yellow moon rising above a mountain. “I decided then and there that the title of the show would be ‘The Moon is Rising’ and texted it to Seoul right away,” he said.

The works on display span a period of 38 years, starting with works from the early part of his career, and it would not be inaccurate to describe the exhibition as a retrospective.

His solo show seems almost overdue, looking at the vast oeuvre of works on display -- the “Moon Jar” series, the colorful “Things I Know” series of pithy wisdoms written character by character on 3-by-3-inch canvases, the new “The Moon is Rising” series and the “Mountain” series as well as writings, drawings and sketches.

“The most important reason for the exhibition is that I wanted to show the viewers why I drew small paintings, why I drew moons. I also wanted to reexamine for myself why I did them,” said Kang.

Asked why it took 12 years for a solo show, Kang explained that his priority for many years has been public art projects such as the 2021 “Bridge of Dream,” an outdoor installation at Imjingak DMZ Park in Paju, near the inter-Korean border. The covered bridge features small canvas paintings by 7,000 children expressing their wishes inside and the lyrics of "Arirang," the best-known Korean folk song, written by Kang on small canvases.

Earlier, in 2016, Kang installed “Floating Dreams” in the center of the River Thames featuring 500 small canvas drawings. The illuminated installation paid tribute to the people displaced during the Korean War and served as a symbol of hope for the reunification of South and North Korea.

“Doing public art is like jumping over a succession of hurdles in a 100-meter hurdle race. An exhibition is like running on a flat land. There are many restrictions to doing public art because it is a public voice. It is a different kind of responsibility,” the artist said of his many public art projects.

The opus of his work has been about connecting, Kang explained, like how two halves are connected to create a moon jar and a bridge connects two sides. And connecting, he feels, is his mission.

“I think that the artist’s role as a connector -- be it connecting South and North Korea, connecting East and West or connecting the past, present and future -- is a very important one,” Kang said. "You cannot play the role of a connector if you are full of greed. It is not easy but I need to let go, empty myself, have a heart like a moon jar."

“The Moon is Rising” runs at Gallery Hyundai in Seoul through Dec. 11.