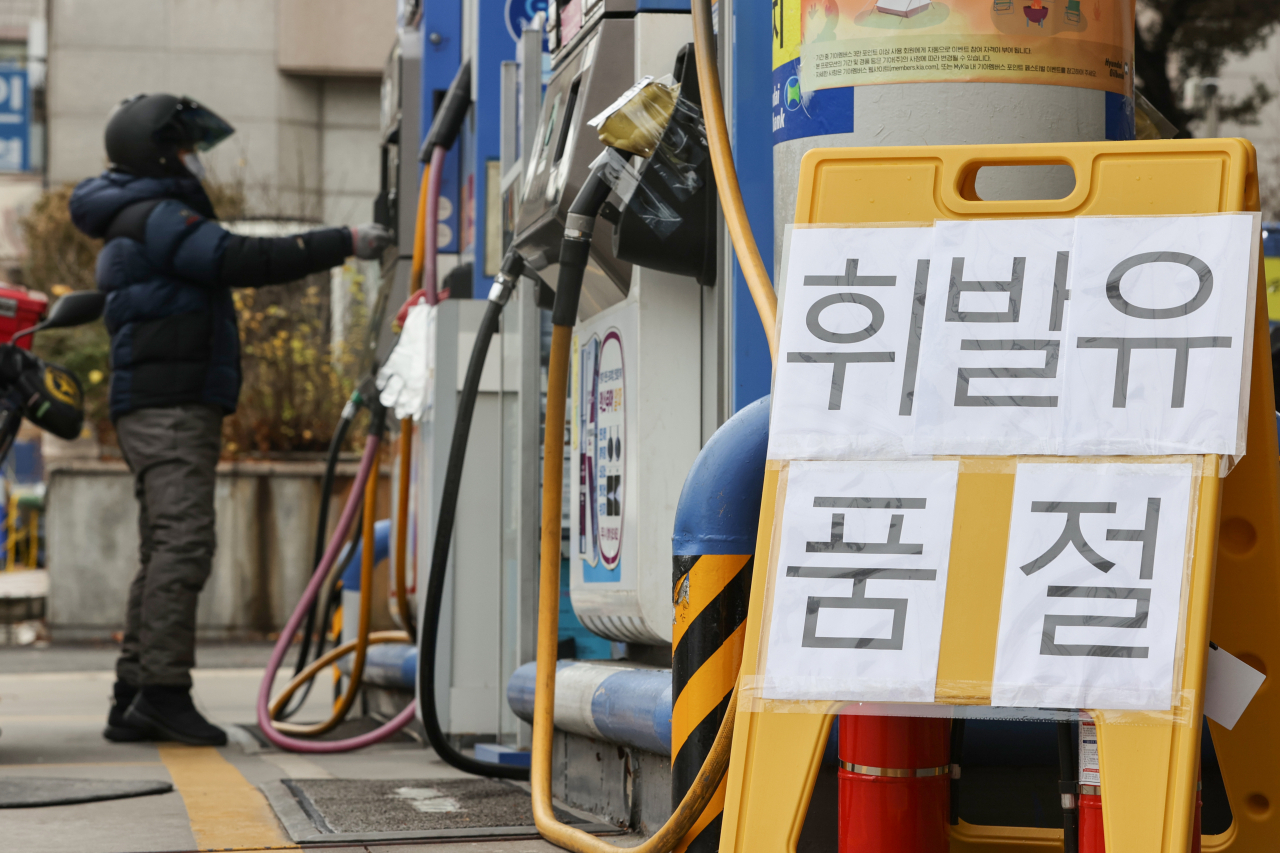 A sign at a gas station in Seoul on Tuesday says the station is out of gasoline. (Yonhap)

Financial damages and disruptions in logistics services are anticipated to increase further among oil suppliers and businesses in the cement and construction industries if the nationwide walkout of truckers continues, industry sources said Tuesday.

Some local gas stations have started to report supply shortages, and the cement industry has reported an accumulated loss of 64.2 billion won ($48.4 million) in sales already.

According to a source from a local oil retailer, certain gas stations -- particularly stations that post high sales -- have already faced supply shortages as they could not receive supply in time due to the ongoing strike.

It has been reported that around 70 percent of road tanker drivers are enlisted in the truckers‘ union nationwide, while the proportion reaches some 90 percent in terms of the greater Seoul area.

The Korea Oil Stations Association on Tuesday said many gas stations, at least for now, have avoided disruptions as they secured stock before the strike. But, some gas stations, whose sales have been high, have run out of stock.

The association said that gas stations will face major damages if the strike continues over the weekend and longer.

"Some gas stations have oil tanks that can hold up to around two weeks, but usually they have tanks that can last for about a week or less. Major supply issues, thus, are expected if the strike lasts longer than a week,“ a spokesperson from a local oil retailer said.

The cement industry also claims significant financial damage due to the strike. According to the Korea Cement Association, the local cement industry has posted losses totalling 64.2 billion won in sales to date.

According to the association, cement is transported to ready-mixed concrete factories and construction sites via bulk cement trailers. In Korea, there are around 3,000 bulk cement trailers, and of the total, only about 1,000 trailer drivers, who are members of the union, are participating in the strike. But, the other drivers have also ceased operation due to concerns over possible future retaliation from the union.

Meanwhile, the government estimated daily losses due to the strike to reach around 300 billion won, based on previous walkouts, including one that took place earlier in June with 22,000 of the union truckers.

How long the walkout will continue is, however, uncertain at the moment, as the South Korean government on Monday failed to come to terms with the unionized truckers in the first session of talks.