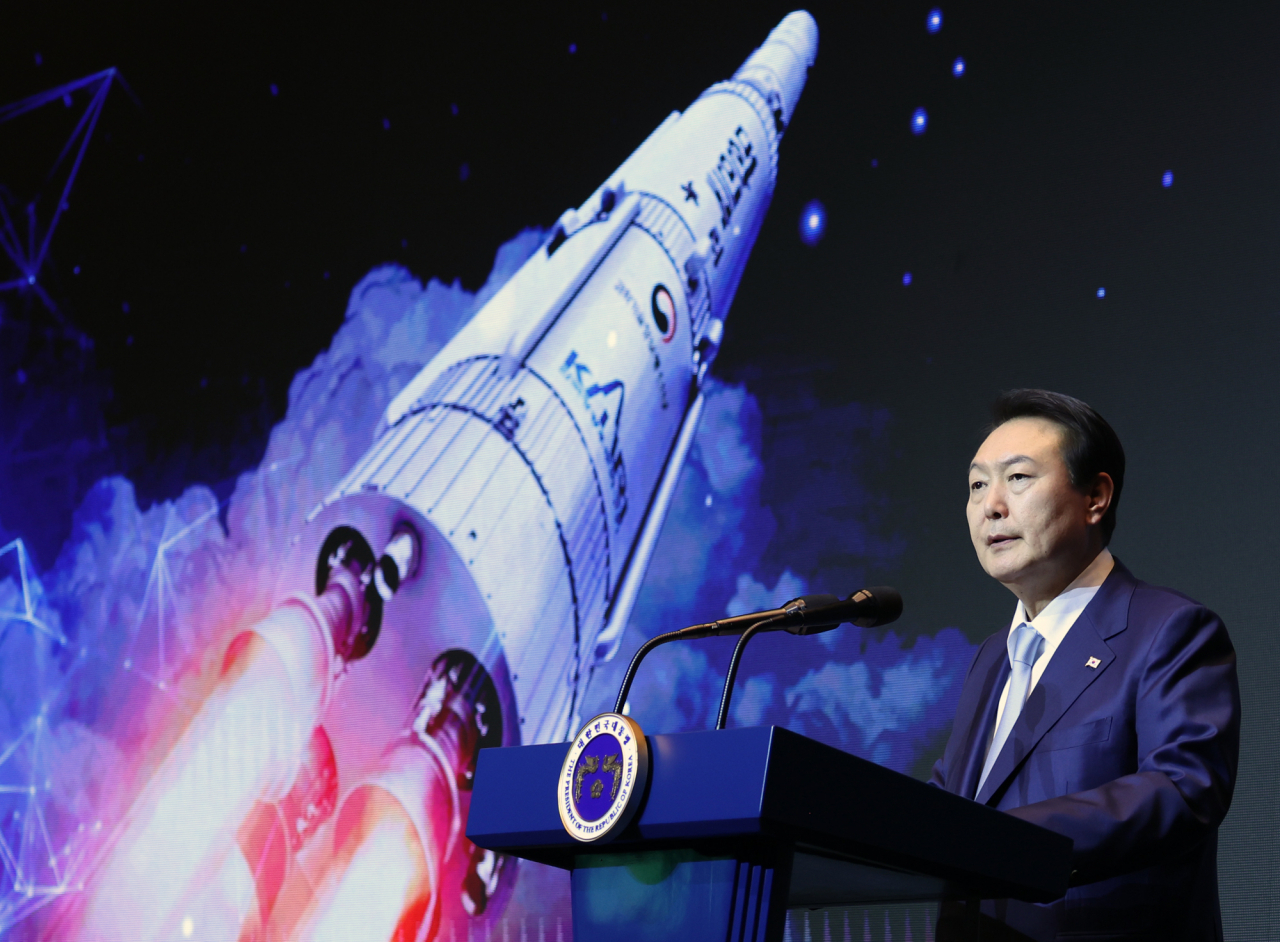 President Yoon Suk-yeol announced South Korea’s space economy road map with goals of landing on the moon and Mars in about two decades.

The plan includes developing an independent projectile engine that can fly toward the moon within five years, “land on the moon in 2032” to start mining resources and “land on Mars in 2045," he said at a ceremony held to mark the government's new space plan.

The plan was unveiled months after Korea became the 10th country in the world to secure launch vehicle technology, following other countries including the US, Russia and Japan. Launched in June, Korea's first homegrown space rocket Nuri was developed at a cost of 2 trillion won ($1.49 billion) over 11 years. Korea became the seventh country to have developed a space launch vehicle that can carry a satellite greater than 1 ton.

Building on this success, the government is gearing up to become a new global player in space by further strengthening public-private cooperation.

At the ceremony, Yoon emphasized a country with a vision for space can lead the global economy and solve problems posed by humanity in the future.

"In order to become one of the world's top five space technology powers, we will develop a more powerful next-generation projectile than the Nuri, and achieve technological independence on the core parts of the projectile and satellite,” Yoon said at the ceremony.

“We will establish a Korean satellite navigation system to support new industries such as UAM and autonomous vehicles,” he said, referring to urban air mobility. “To do this, we'll double our space budget in five years, and we'll have at least 100 trillion won in investments by 2045.”

KASA -- the Korea Aerospace Administration -- is to be “launched at the end of 2023” to establish aerospace policies and lead research and development and technology acquisition, the president said.

The administration will be established under the Ministry of Science and ICT as a separate organization from the Korea Aerospace Research Institute, which was responsible for launching Naro and Nuri. A team to promote KASA was created on the day within the Ministry of Science and ICT to design the organization and secure the needed human resources and budget.

South Korea is a relative latecomer to the space race.

Korea’s rocket development program had been restricted by 1979 bilateral missile guidelines with the US. About two decades later, the US scrapped limits on the range for private rockets not used for military purposes.

In 2013, the nation’s first rocket Naro was successfully launched after several failures and delays. But Naro relied on Russia for major technologies. Korea took over the development from the second stage, but the first-stage engine was entirely imported from Russia.

The Nuri development project started in March 2010. It took more than 12 years from design to launch. With the efforts of numerous researchers, a three-stage space launch vehicle capable of launching a 1.5-ton practical satellite into low earth orbit at an altitude of about 700 kilometers was completed with Korean technology.