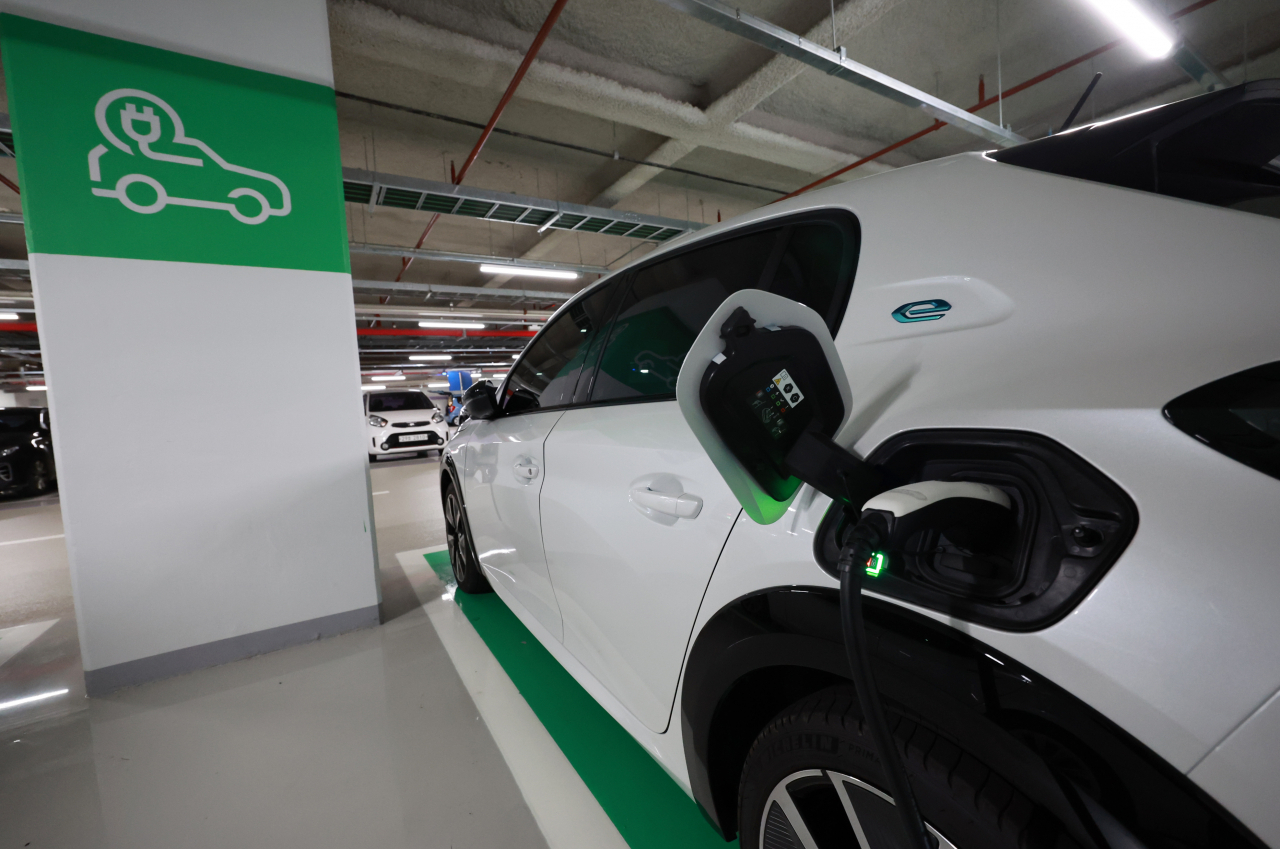 An electric vehicle is parked in a designated parking spot as it charges in Gangnam-gu, southern Seoul, Oct. 31. (Yonhap)

Battery swapping is touted as an emerging solution for EVs, particularly in China. The technology allows drivers to switch a drained battery with a fully charged one in just a few minutes, instead of having to charge the empty one at a designated station.

Rolling out battery swapping in South Korea could bring several benefits, the report said. It could allow the country to efficiently manage the country's power grid and become an alternative to the conventional charging system. It could also help reduce safety and battery performance issues the industry faces, such as battery fires, long charging times and frequent battery replacement.

While EV giant Tesla has dismissed the technology, China has pushed hard to implement battery swapping on a large scale. In 2019, the Chinese designated the battery swapping market as an eco-friendly segment and introduced EVs with the new solution, according to the report. In the following year, the government began introducing policy incentives, subsidies specific to battery-swap EV models. Standardization and infrastructure investment aimed to nurture the market too followed.

With China taking the lead, the electric vehicle battery swapping market is expected to rapidly grow in the next few years. The Chinese market for battery swapping is estimated to grow to around 18 trillion won ($13 billion) in 2025, from 840 billion won last year.

The number of EVs equipped with battery swapping technology is also expected to post an annual growth of 86 percent to reach 1.92 million by 2025. The number of passenger vehicles with the battery-swapping solution is expected to account for some 17 percent of all passenger vehicles in China, while commercial vehicles with the same solution is estimated to account for 33 percent of the same sort.

The number of battery-charging stations will reach 30,000 by 2025, from 1,406 as of last year, in line with the increasing number of EVs with battery swapping solution, according to the Chinese government's announcement.

A researcher at KITA noted that swift introduction of battery swapping is also possible in South Korea if the government decides to test the solution in the public sector first, where it can push ahead with top-down standardization and infrastructure investment.

The researcher, however, warned that the battery swapping sector can potentially exclude smaller players from the market as the segment requires substantial amount of investments from conglomerates.

The report advised that the government should develop a business model where small and medium sized enterprises -- those involved in car repair, parts making and other minor automobile services -- can join.