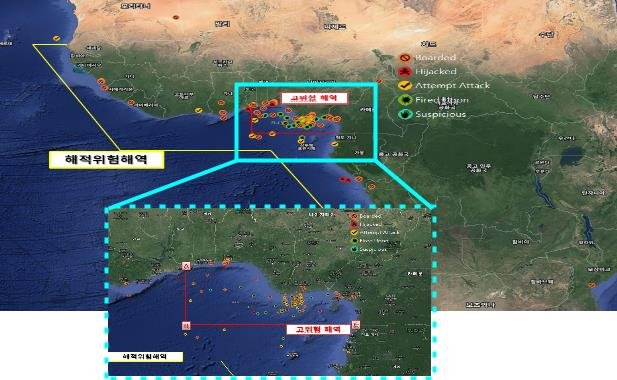 This file image shows waters off West Africa where kidnappings are rampant. (Ministry of Oceans and Fisheries)

An oil tanker in West Africa with two South Koreans and 17 Indonesians aboard, which was freed after being hijacked by pirates earlier this week, is expected to be towed to its destination due to damage caused to the engine by the kidnappers, according to Seoul's foreign ministry officials Sunday.

The 4,000-ton tanker owned by a South Korean shipping company was hijacked by pirates in international waters off of West Africa on Thursday then released a day later. The pirates reportedly stole petroleum stored in the tanker and destroyed the ship's internal equipment before leaving the vessel.

According to a ministry official, the ship had initially planned to return to Abidjan, Ivory Coast, where it had left from, by Sunday but failed to do so due to damage of its engine.

"It needs to be towed," the official said, and added that an ally nation's Navy in the region plans to guard the tanker until a tow ship arrives and steers the tanker safely to Abidjan. According to the official, the sailors are in healthy condition. (Yonhap)