Earlier this month, a man in his 20s was arrested on charges of stealing 100,000 won ($74) worth of food over a span of four days from an unmanned store in Bucheon, Gyeonggi Province. When caught, he said he was hungry.

The court is yet to decide on this 21st-century Jean Valjean's case, but poverty is a very real issue among South Korea’s young adults, a problem aggravated by the global COVID-19 pandemic and ensuing insecurity in the job market.

As of this August, 1 out of 10 recipients of the government’s basic livelihood support were in their 20s or 30s. Their numbers totaled about 245,000, which was the highest on record and more than double the figure a decade ago.

The city-run Seoul Institute, in its report released the same month, pointed out that South Korea has become a tougher country to live in for young people over the past two decades.

In the year 2000, the Korean economy expanded 9.1 percent on-year and the unemployment rate among the 18-39 age group stood at 7.5 percent. By 2020, this has changed to economic growth of 2.1 percent and a 10.1 percent joblessness rate for the same demographic. 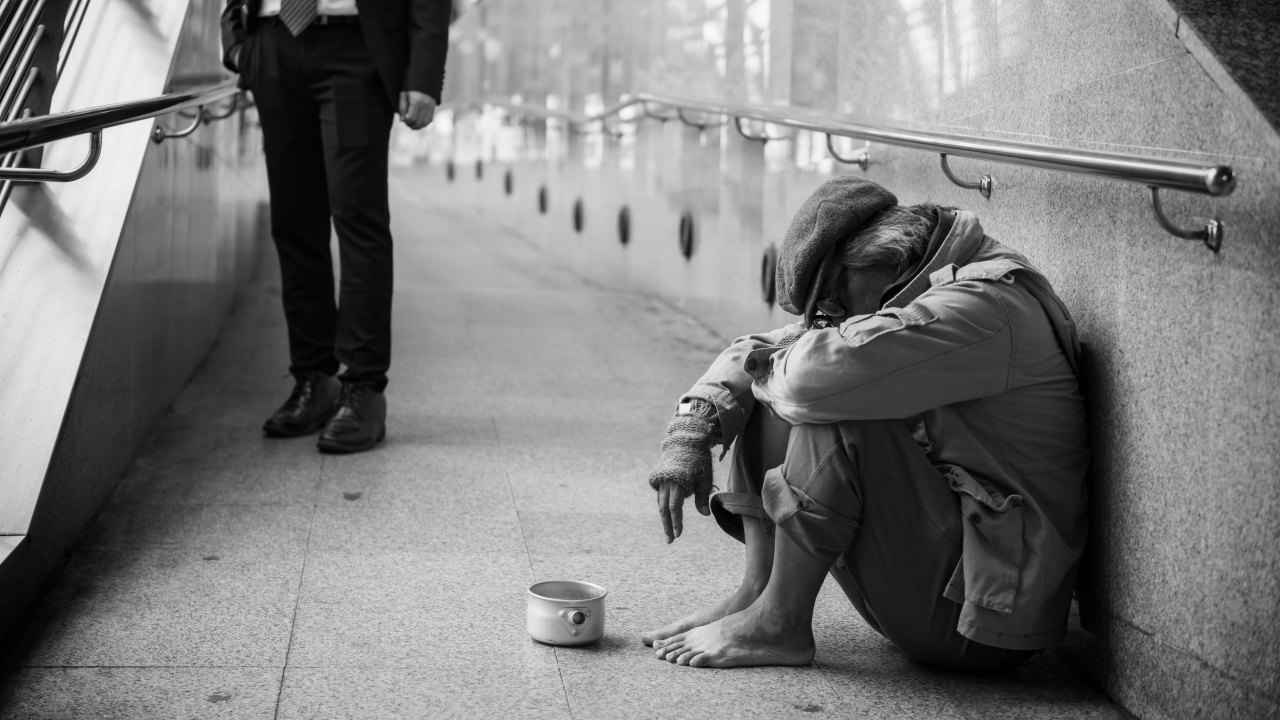 This photo is not directly related to the story. (123rf)

Researchers looked at other factors like “the possibility of moving between social classes" and “the rate of the 20s subjectively feeling they are in good health” and found that all have dipped from 10 to 20 years ago.

“There is a concern that the youth population becomes the ‘lockdown generation,’” they wrote in the study which was based on data compiled from Bank of Korea, Statistics Korea and the Korea Disease Control and Prevention Agency.

“As the main source of income for the working-age youth is labor, a decrease in jobs and loss of income-making opportunities can hinder their stable incorporation into the labor market,”they added.

Experts point out that the traditional way of looking at income to define poverty has a blind spot when it comes to evaluating youth poverty.

Young people generally do not have substantial real and financial asset holdings. Even if their income is above the poverty threshold — below 50 percent of median income – they could be heavily indebted and be ‘net worth’ poor.

A survey released earlier this year by the state-run National Youth Policy Institute showed that nearly 43 percent of people aged 19-34 felt subjectively poor. Of that 43 percent who felt poor, 34.3 percent said it was unlikely that they pulled themselves out of poverty in the future.

The survey was conducted on 4,114 Koreans aged 19-34 across the country. It found that about 41 percent of respondents earned less than 20 million won (around $15,000) a year. Some 32 percent had annual income of between 20 million and 40 million won.

Many faces of poverty

The study by the Seoul Institute found that young people suffering from financial poverty were more likely to have health issues, particularly mental health issues.

Another issue, the researchers pointed out, was that poverty at the early stages of adulthood is likely to affect later stages of life as well.

“Deficiency experienced in young adulthood is likely to affect one’s steps toward establishment of a family -- such as independence (from parents) -- and also have negative impact on the accumulation of assets,” the authors wrote.

This is supported by the number of people apparently putting off marriage due to financial limits.

Statistic Korea’s biennial survey -- taken by 36,000 people aged 13 and above -- released earlier this month showed that 35.4 percent of unmarried male respondents cited a lack of money as the reason they were not married, the No.1 reason among them.

Only 22 percent of unmarried women cited the same reason, slightly behind the top reason for their group, which was that they “do not feel the need for it” at 23.3 percent.

A 35-year-old Kim Min-woo -- not his real name -- shared his story about how financial limits is a hindrance. “While it changed a lot from the past when men HAD to pay fully for the house, there are still substantial expectations (from the woman’s side). It’s not that I don’t want to get married forever, but I’d rather not rush into things unprepared,” he said.

The most frequently cited reason, at 48.8 percent, was that they “did not have financial security.” 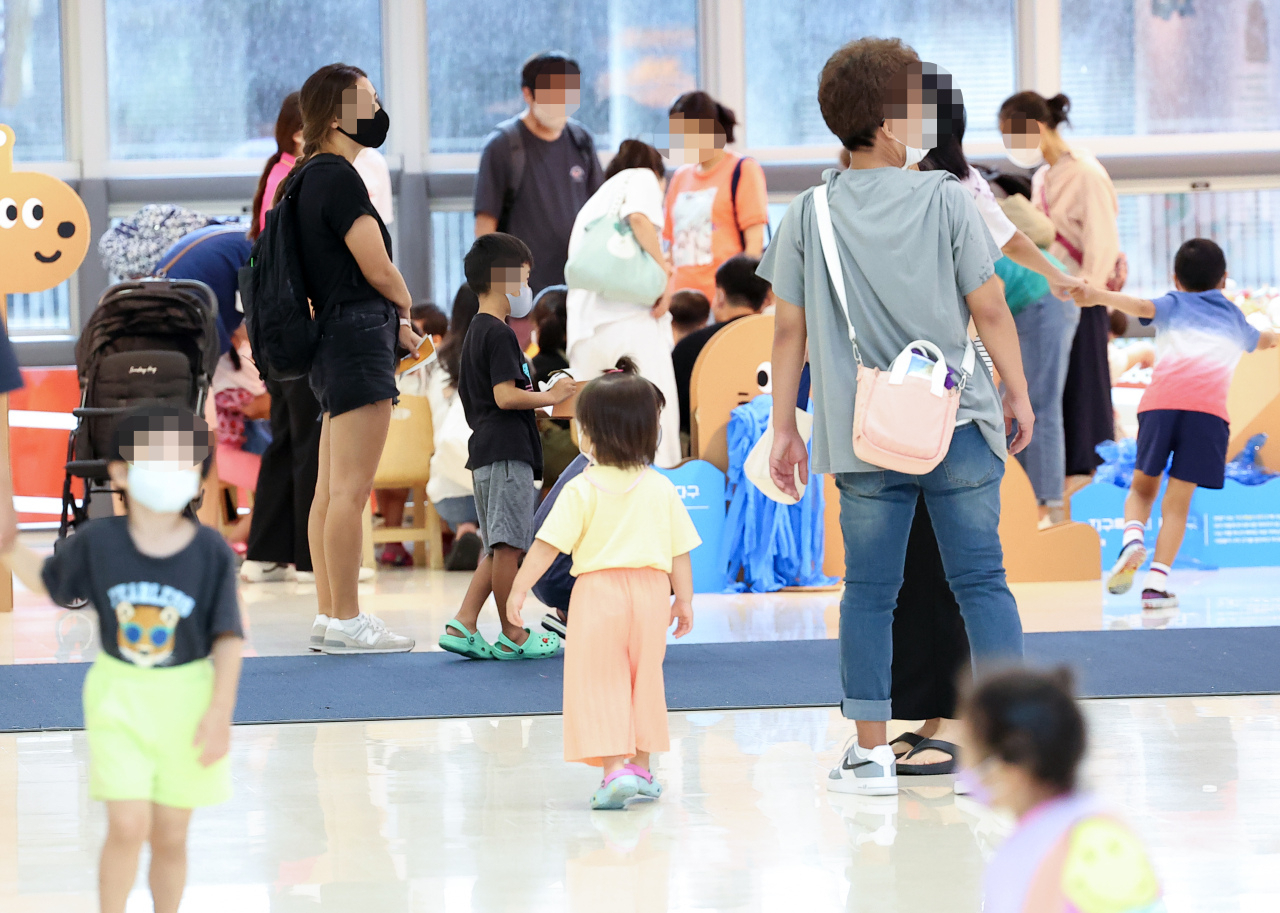 Children and parents at Children's Grand Park in eastern Seoul on July 31. (Yonhap)

This reluctance to start a family shows in the falling birthrate, which has become a chronic problem in South Korea. Last month, Statistics Korea announced that the birth rate for August was the lowest figure ever since the country started keeping records in 1981.

The overall total fertility rate -- an average number of children that would be born to a woman over her lifetime -- was projected to be 0.77 this year, down from 0.81 last year. The same organization projected last month that 44.4 percent of the families in the city of Daejeon would be without kids by the year 2050.

Figures indicate a vicious circle: young people have financial issues, which cause them to be reluctant to start a family, which leads to fall in fertility rate and population that generally holds back economic growth.

Experts at the Seoul Institute call for youth support policies to prevent and aid the poverty problem in the young generation, taking into consideration their characteristics. This includes a monitoring system, different policies for those living in different types of households -- such as one-person households or those living with parents -- and separate policies for each phase of life, taking into account that frequent ailments for people in their 20s and 30s were different.

“Traditionally, the poverty has been discussed mainly in relation to children and seniors, with youth poverty being treated as a temporary phenomenon that occurs when acquiring independence from parents. The various types of poverty experienced in early adulthood deteriorate the quality of life and has negative repercussion on the parent generation and the future generation as well,” they said.