Before the Korean War a railway connected Seoul and now North Korean city of Sinuiju, working as a main route traversing the country vertically. Eventually the two Koreas, along with railway, or Gyeongui Line, were severed, save for a section connecting Seoul and its satellite cities, known as the Gyeongui-Jungang Line.

After a plan to transform the obsolete over-ground railway into an urban park launched in 2010, the park was made accessible to the general public in three phases and finally completed in 2016.

Gyeongui Line Forest Park is a 5-kilometer-long walking path with plant life living around the old railroad. It moves from Gajwa Station extending to Gongdeok Station, existing over the Gyeongui-Jungang Line, which operates underground. The path used to be open to cyclists, but bicycles and electric scooters were banned due to the endangerment of pedestrians.

Those visiting the park should note that unlike what the name suggests, the Gyeongui Line Forest Park is not actually a single venue but made up of several sections intersected by roads in a few places. Detailed information about the park can be obtained via an English e-book provided by the Seoul Metropolitan Government (http://ebook.seoul.go.kr/Viewer/LMY0E1LIM813) or the webpage (https://parks.seoul.go.kr/template/sub/gyeongui.do) for those who can read Korean. 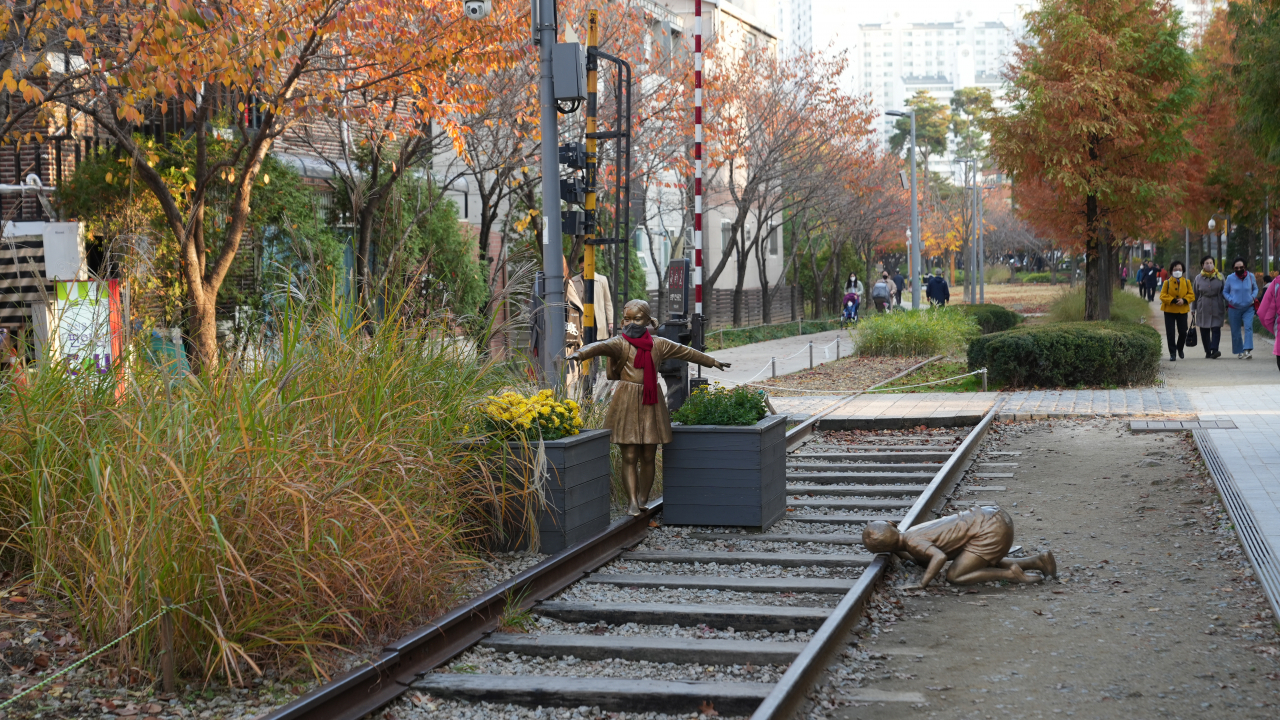 This 1.3-kilometer-long section is the most populated and well-known, accessible from Hongik University Station Exit No. 3. This is the preferred entry point but also accessible on foot from Gajwa Station Exit No. 4, at its northern end, by crossing the Sacheon bridge and walking about 100 meters.

Upon stepping off the escalator, there is a green trail with trendy bars and restaurants on both sides. This area gets particularly crowded with couples, families and their pets wanting to enjoy a relaxing walk during warmer nights. 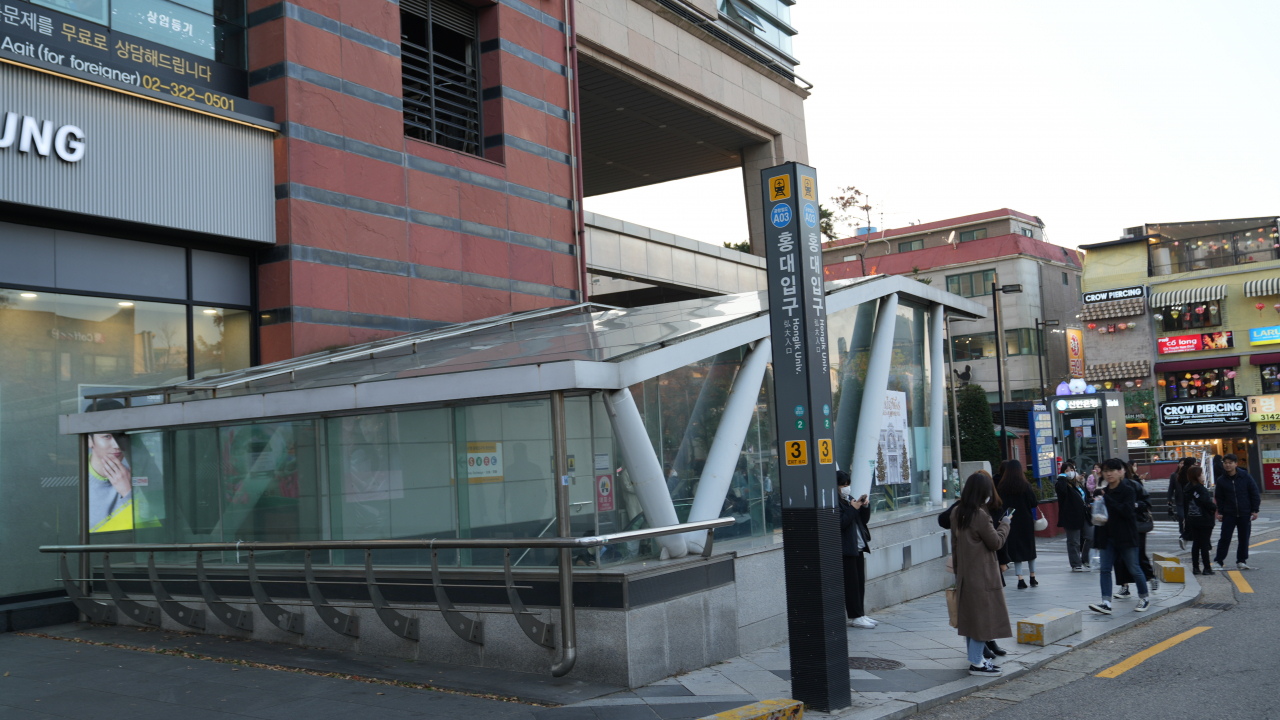 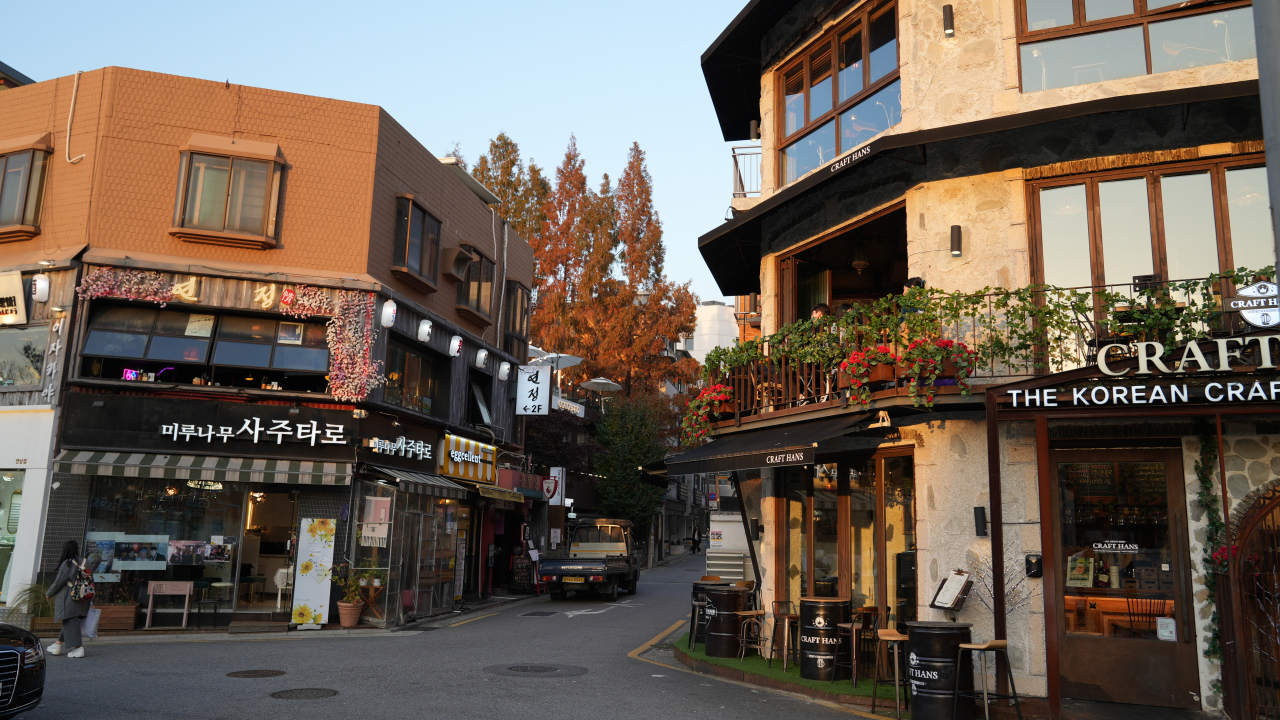 This section of the park is known to locals as “Yeontral Park,” based on New York’s Central Park.

Of course it is nowhere near as large or famous as Central Park, but it provides a welcome piece of green to the otherwise-concrete region of the Hongdae area.

It is also a preferred dining place for all. In the nearby alleyways, restaurants offer foreign cuisines including Japanese, Indonesian and Thai.

Keep in mind the grass area is off-limits, a decision made due to persistent littering problems despite warning signs placed by authorities. Nearby residents have also filed noise complaints, so visitors should come to “Yeontral Park” for peaceful enjoyment.

This relatively short section reminds those walking it used to be a railway, particularly with the preserved “Ttang-ttang-geo-ri," or "ding-ding-path” -- a rusty railroad-crossing gate and statue of a man hinting at how things used to be a century back.

Underneath the Wau Bridge, remnants of old railway tracks can be walked upon. Also located here is an area called the G-Line Book Street which hosts art exhibitions, cultural events and programs to encourage reading. Lining the path are charming bookstores, booked-themed sculptures and a wooden stairway serving as a resting spot for pedestrians. 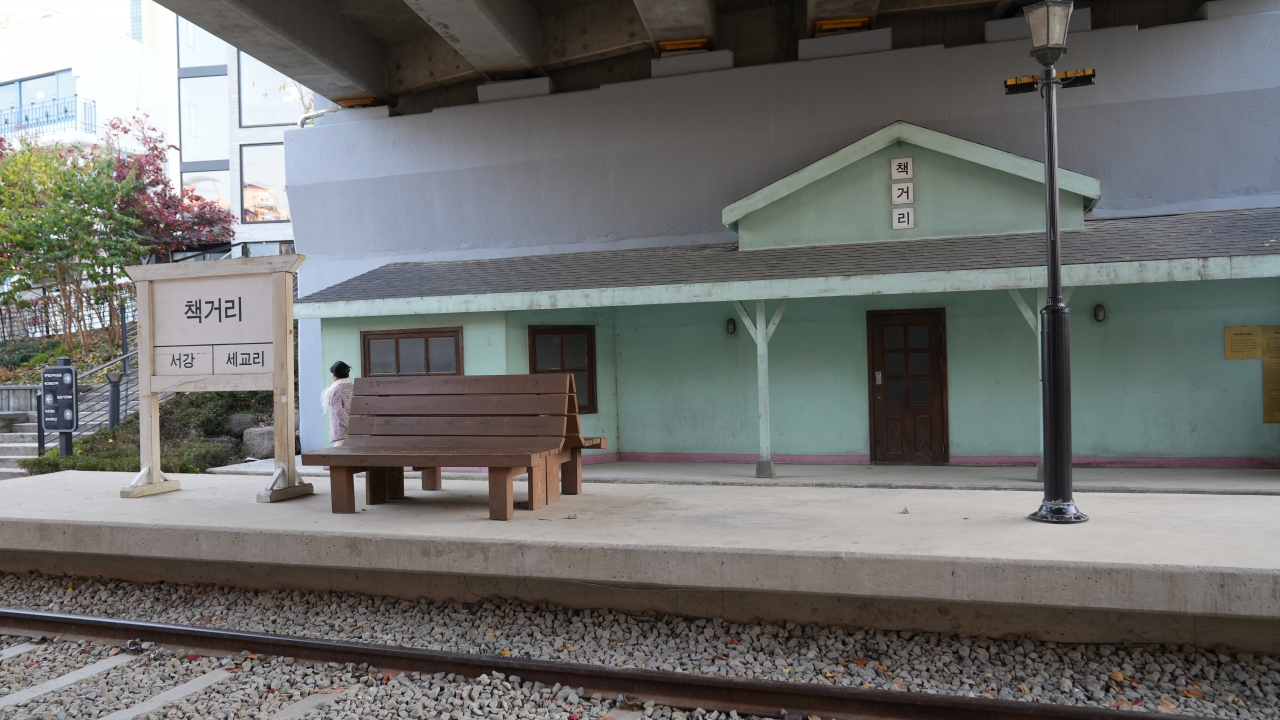 Another unique feature is the photo zone right below Wau Bridge replicating the look of the early 20th-century train station, complete with the station building and platform next to the railroad.

This is section is devoid of the flare of Hongdae and flamboyancy of Yeonnam-dong, but instead passes through a relatively-quiet, mostly residential area of Mapo-gu.

While this section had previously been cut off from the Wau Bridge section by a main road, the construction of the Sogang Sky Bridge connected them.

Sogang University Station Exit No. 1 leads to an open square intended as a place for students and residents to socialize, being adjacent to an elementary, middle, high school and university.

In the Sinsu section near Daeheung Station, there are statues of children playing at the old railroad along with another boom barrier. 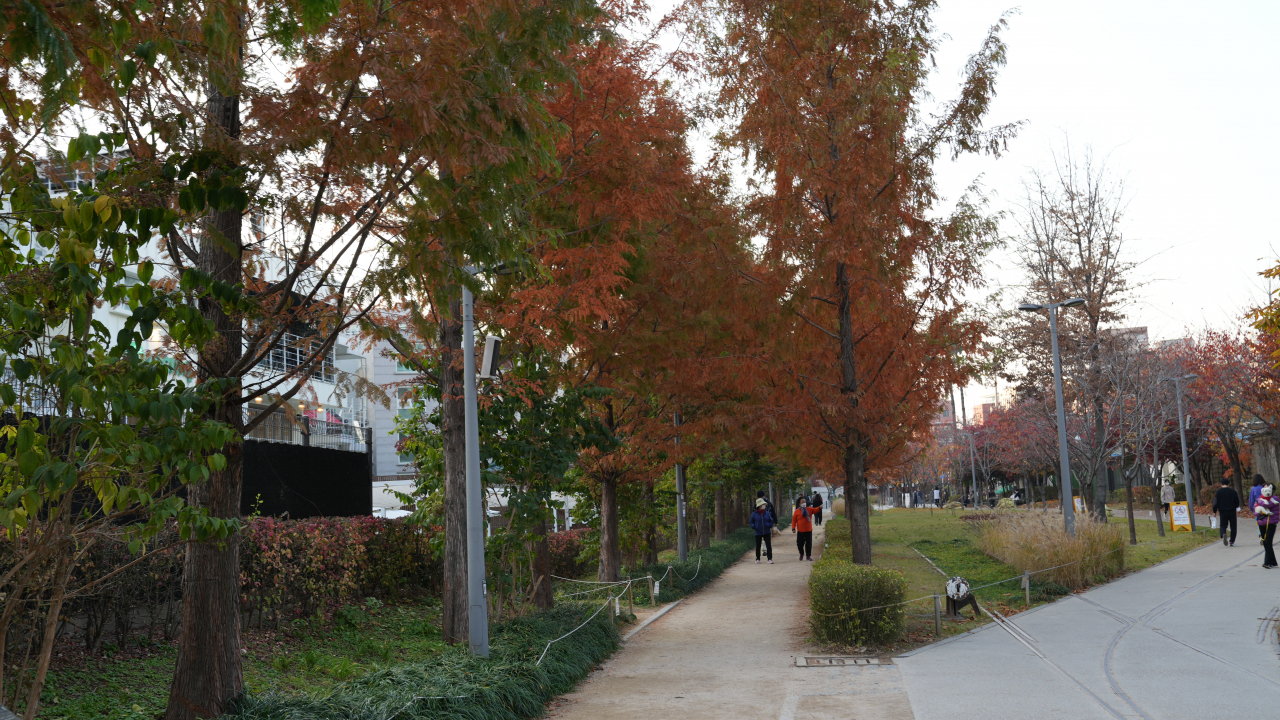 In the 2012 Korean movie “Architecture 101,” two college freshmen who are just developing feelings for each other play a game and walk on the railroad. It is considered one of the most memorable scenes in the film, albeit technically illegal. These days, those wishing to reenact the iconic scene can do so without the risk of getting arrested, or killed.

There is a resting area with the sign “Gan-i-yeok," which means “temporary train station,” and arrows pointing to Seoul and Sinuiju, keeping with the general theme.

An artificial stream, Seontongmulcheon, runs along the path adding to the peaceful atmosphere. Cafes and restaurants housed in traditional Korean hanok buildings can be found here.

It is also adjacent to the Mapo Art Center which hosts events and exhibitions.

The name Saechang Gogae, or Saechang hills, comes from the Joseon era when it used to be government storage, with the word “chang” meaning storage. This area is surrounded by apartment complexes and feels most like a park, with plenty of greenery, benches and resting areas.

The old railroad tracks have been mostly covered by shrubbery, but therein lies gravel replicating how it once used to be the most prominent railway on the peninsula.

This area is located near Gongdeok Station Exit No. 10 and extends east. There is an observatory overlooking Namsan and N Seoul Tower, and a wall imprinted with history of the Gyeongui Line near Wonhyo-ro. 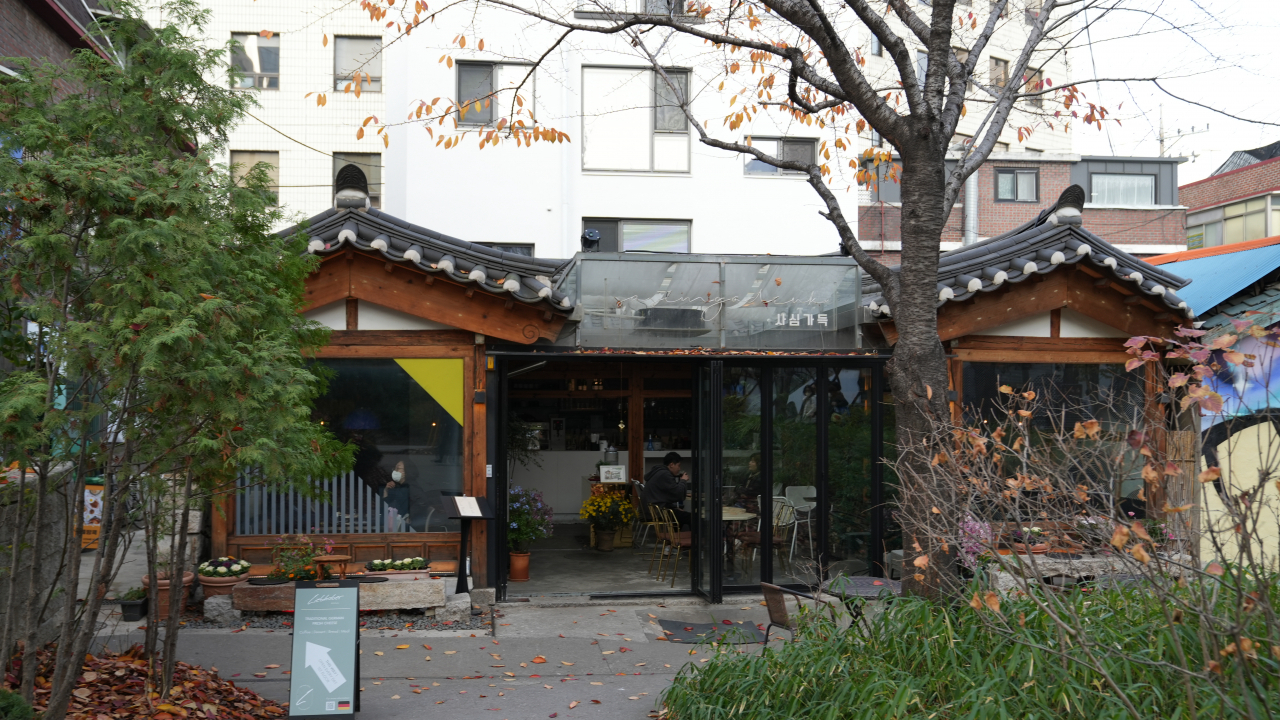