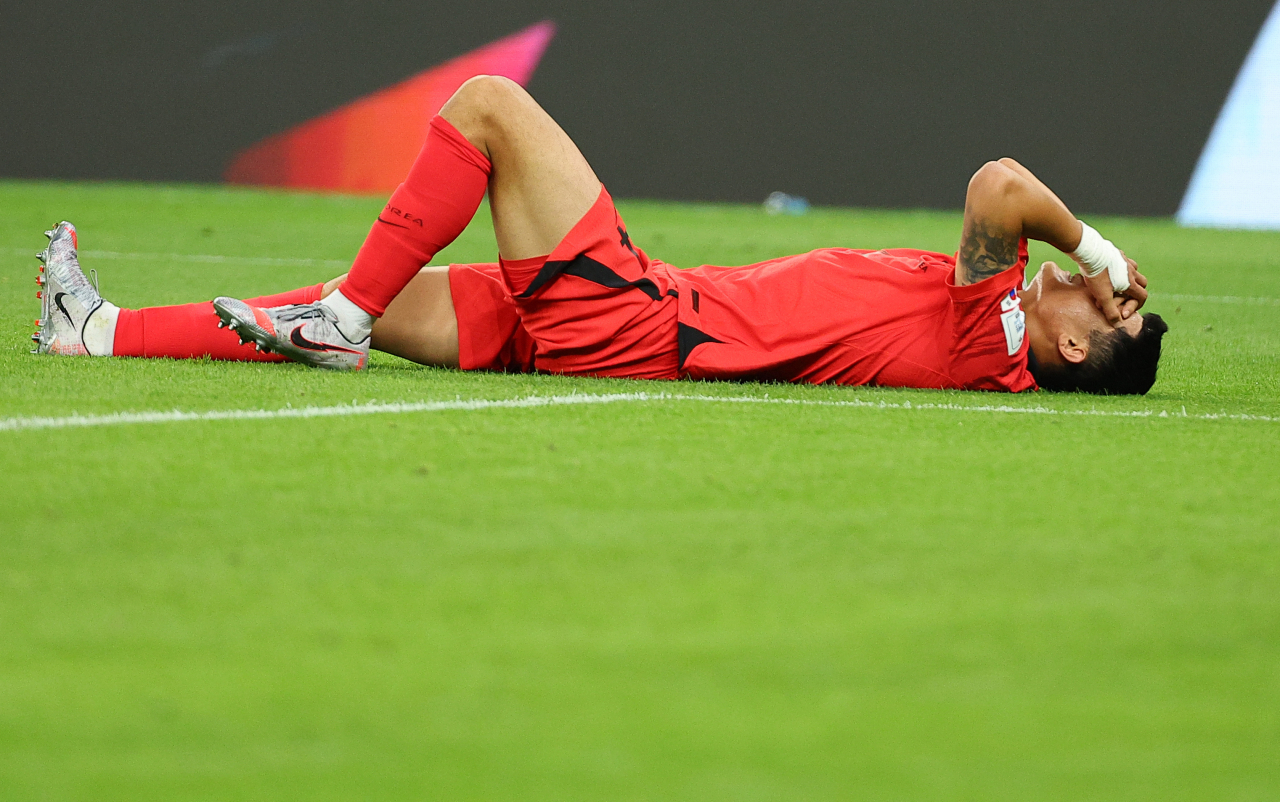 Kim Min-jae of South Korea stays on the pitch in pain during the team's Group H match against Uruguay at the FIFA World Cup at Education City Stadium in Al Rayyan, west of Doha, on Thursday. (Yonhap)

DOHA -- Injuries have always been part of football, but the injury bug has stung teams particularly hard at this year's FIFA World Cup, being held in the middle of European club seasons for the first time.

South Korea have not been immune, with some key players dealing with injuries of varying severity throughout the month.

The most notable injury was to their captain Son Heung-min, who suffered facial fractures in a freak collision with an opponent during a match. He played South Korea's first Group H match on Thursday against Uruguay in a protective mask, though he appeared a bit rusty playing for the first time since sustaining that injury on Nov. 1.

For that Uruguay match, winger Hwang Hee-chan was not available for South Korea. The attacker for Wolverhampton Wanderers had been dealing with some hamstring problems before joining the national team here. He had mostly been a limited participant in team training sessions before making his way back on Saturday.

But just as Hwang drew back in, another key player, center back Kim Min-jae, hit the sidelines. The defensive stalwart for Napoli suffered right calf strain against Uruguay. He managed to play the full match after hurting his leg and said afterward he didn't think the injury was serious.

However, out of an abundance of caution, the national team held Kim out of training for two straight days after the Uruguay match, Friday and then Saturday. He stayed back in the team hotel for treatment and rest. There was no immediate word yet on Kim's status for South Korea's next match against Ghana on Monday.

Two other defensive backs, Kim Jin-su and Yoon Jong-gyu, battled hamstring problems throughout training camp in Doha. Kim took painkillers to play the entire match on Thursday while Yoon remained on the bench. Yoon said Saturday he was finally healthy enough to train with the rest of the team.

With Kim Min-jae, playing heavy minutes for his Italian club might have taken its toll. He came to the World Cup having played full matches in 20 out of Napoli's 21 games so far this season.

Europe is where many big names ply their club trade and they have had to jump right into the big tournament with little time for rest and recovery from bumps and bruises. And with the World Cup eating up about a month of their season, European leagues faced scheduling crunch in the early weeks, squeezing as many matches as they could into a tight window. Between league action and continental competitions, many players for top clubs arrived in Qatar banged up.

Kim tried to downplay concerns over fatigue, saying there were many others in a similar situation and he didn't want to make any excuses.

Kim Jin-su, who recovered just in time for his World Cup debut on Thursday, said he was not the only player taking painkillers.

"There's no one here who's pain free," Kim said. "I'll make sure I'll be ready for the next match." (Yonhap)