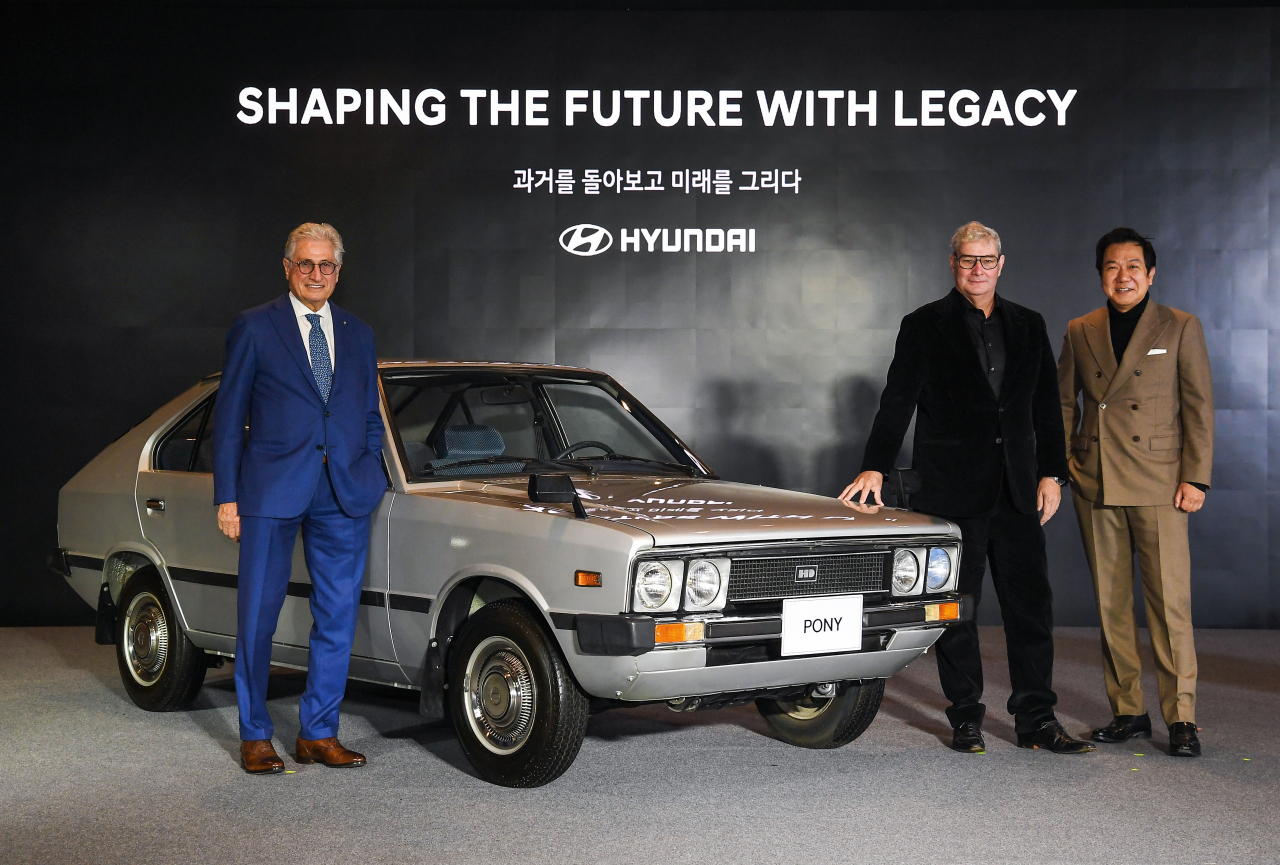 Hyundai Motor will re-create the Pony Coupe Concept with the model’s original designer Giorgetto Giugiaro and unveil it in the coming spring, the carmaker announced Thursday at a design talk in Yongin, Gyeonggi Province.

The Pony Coupe Concept is a car lost to history, as despite being unveiled at the 1974 Turin Motor Show with its prototype ready for mass production, the carmaker could not start production due to the domestic economic situation.

Almost 50 years later, Hyundai Motor contacted the legendary designer Giorgetto Giugiaro, who had also designed the first-generation models of Hyundai vehicles such as the Pony Excel, Presto, Stellar and Sonata, to rebuild the Pony Coupe Concept.

The re-creation project was designed to reflect on the passion of Hyundai founder Chung Ju-yung, who hoped to foster cars as the nation's main export industry with Pony and wanted to become a global brand with the Pony Coupe, according to Hyundai Motor.

Giugiaro, who was in the country to initiate the project with Hyundai Motor’s designers, told local reporters that the Pony Coupe will be further developed to meet the carmaker’s vision of shaping the future with legacy.

“I will design with passion as I did back then when I designed the Pony Coupe Concept in 1974. I am happy to have the opportunity to re-create the Coupe, but a further developed one. I have seen some of the initial works that Hyundai designers have done and it looks great already,” Giugiaro said.

Hyundai Motor Group’s Chief Creative Officer Luc Donckerwolke and the head of the Hyundai & Genesis Global Design Center Lee Sang-yup also presented at the design talk, discussing how they should progress into the future designwise with Giugiaro.

“Hyundai is now at a point where it is trying to draw its next 50 years. If Pony was where Hyundai began its history 50 years ago, Ioniq 5 is the starting point for our next 50 years to come. We will have our brand’s iconic designer Giugiaro working with us to build that future,” Donckerwolke said.

“Giorgetto Giugiaro is the company’s spiritual father and his Pony Coupe Concept design had inspired many car designers around the world. I think it is very important to continue this valuable legacy when designing future cars to satisfy the needs of our customers,” said Lee.

The legendary designer hinted that the Pony Coupe Concept would be a simple but modern car, different from others that try to put too much into a car.

“When I designed the Pony Coupe Concept back in the 1970s, I pursued simplicity. These days, we see carmakers trying to show off everything they have in one car, and that sometimes surprises me,” Giugiaro said. "Everything needs balance."