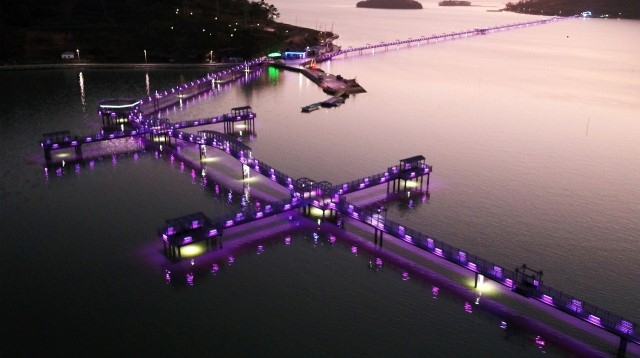 A pedestrain bridge connecting the islands Anjwado, Bakjido and Banwoldo is illuminated in Purple. (Shinan County)

Once a quiet, declining rural area, the islands of Banwoldo and Bakjido in Shinan County, South Jeolla Province, have emerged as tourist attraction after coloring themselves purple.

Inspired by the wild balloon flowers that grow across the islands, the county decided to turn the two islands into "Purple Island" to invite tourists from the rest of the country and beyond.

Before the development began around 2018, there were only 136 residents in Banwoldo and Bakjido, and the region was suffering from an aging and shrinking population. Due to the request of the residents, a pedestrian bridge between Anjwado -- a relatively large island close to the two islands -- was created, but more effective measures were needed to revitalize the local economy.

"Purple Island is a successful example of color marketing based on the wild plants in the region, the balloon flowers," said Shinan Mayor Park Woo-ryang.

At that time, Park came up with the idea of color marketing when he heard the residents say that there were only purple balloon flowers on the island. He planted various purple flowers every season, including lavender, lilac, hollyhock and purpletop vervain. Every building, restaurants, cafes, bridges and even the roofs of villagers' houses were painted purple. Even the snacks and souvenirs in the village are purple.

Among the two islands, the bigger island was named Banwoldo, meaning Half Moon Island in reference to its shape. The visitors can enjoy the beautiful coastal trail, which is about four kilometers long, on a small purple electronic vehicle while listening to local residents' stories. The smaller island, which was named Bakjido due to a legend that a person with the surname of Bak first came in and started living there, has a 2-kilometer coastal trail.

The island has a photo zone dedicated to K-pop boyband BTS, whose symbolic color is purple. BTS member V frequently uses the phrase "I purple you" to express his love and affection for his fans, and the phrase has been made into a huge sculpture on the purple pedestrian bridge that connects two Islands to a bigger island named Anjwado. 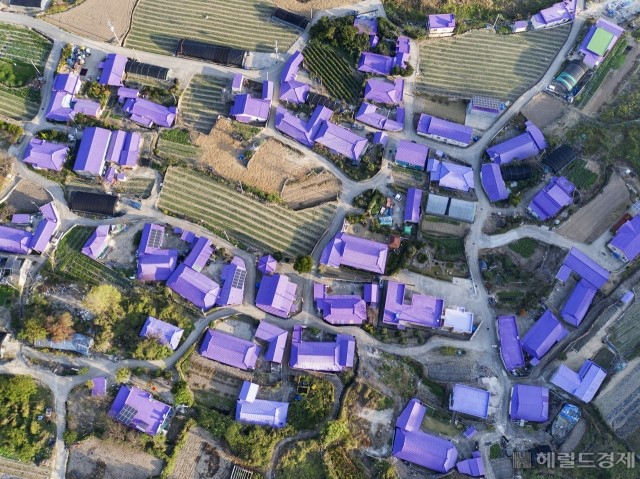 After the grand-scale recoloring, the island was reborn as a unique travel destination that draws significant amount of tourists. On the weekend, an average of 2,000 people visit the region and more than 300,000 people visited last year, earning 1.8 billion won in admission fees alone.

"I am grateful to all of those who visited Shinan during a difficult time due to the prolonged COVID-19 pandemic. We will continue to endeavor making Shinan a jewel-like area with the county residents, without damaging the ecological environment and the unique characteristics of each island," said Park.

Exempting admission fees for visitors who wear or bring purple clothes and accessories also contributed to the popularity of the Island. Visiting Purple Island in purple clothes has become a new travel trend.

"Our final goal is for everyone who visits Purple Island to wear purple clothes," added Park.

Park cited "increasing the self-esteem of residents through active cooperation and using the color of native plants as a concept" as factors for the success of Purple Island. "The village where its residents feel proud of becomes a popular place to present in front of the tourists with confidence,” Park said. 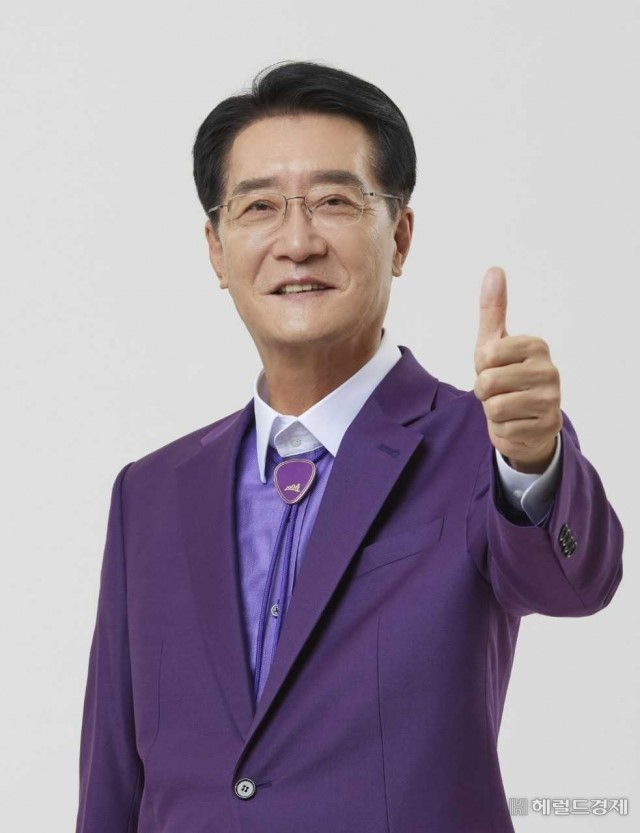 With its successful redecoration, even foreign media outlets like CNN and Reuters began to pay attention to this unique destination. In December 2021, the islands were selected by the United Nations World Tourism Organization for its list of the world's best tourism villages.

This year, Shinan County was selected as the best travel destination of the year by SRT Magazine. Shinan won the honor after thorough evaluation including the opinions from several travel writers, travel reporters and 10,093 survey respondents.

Moreover, on Nov. 11, the mayor won the Presidential Award for increasing tourists and revitalizing the local economy through the successful development of Purple Island.

Park said he plans to continue developing Purple Island with his “One Museum in one Island” plan. It is aimed at creating art galleries or museums to share world-class artists’ works and a unique park and gardens in each village in Shinan County are in progress.

The co-existence with the environment is also the key goal of the further development plan. Shinan Mud flat is one of the world's top five tidal flats with rich natural minerals, and it is wide enough to account for 15 percent of South Korea's total tidal flat area and 38 percent of South Jeolla Province.

Park stressed that the local administration will struggle to establish an eco-friendly system that can effectively manage the marine ecosystem, while taking advantages of the tourist resources. “We will make Shinan the center of global marine ecology. We will expand the eco-friendly system to systematically manage mud flats, coasts, and uninhabited islands," said Park.

"Under the pedestrian bridge, there is a wide tidal flat instead of a current wave, and there is cute photo zone and a coastal road. We invite you to Purple Island, the mecca of purple," said Park.