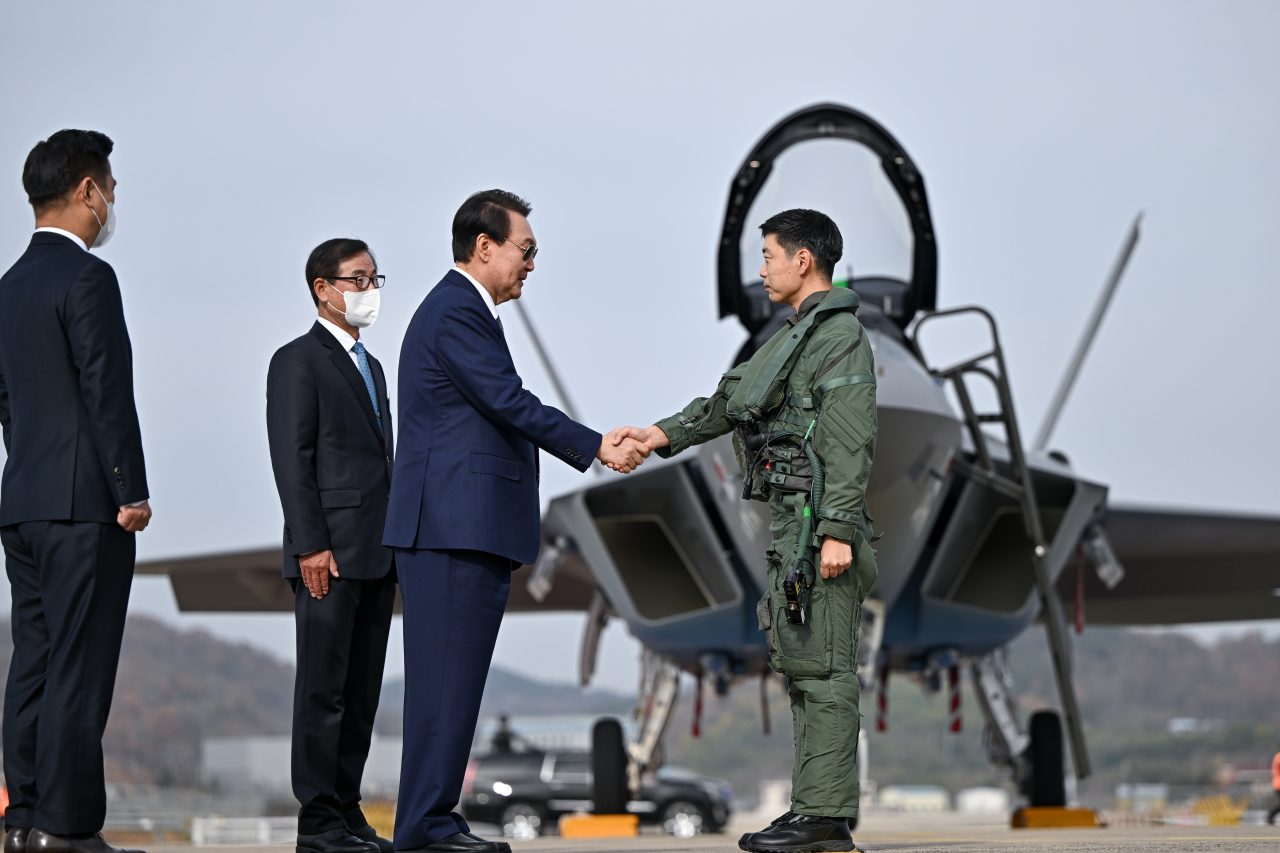 President Yoon Suk-yeol has vowed to actively support defense exports, touting the sector as a "future new growth engine” and “driving force for high-tech industries” during his visit to the nation’s leading arms firms on Thursday.

South Korea, which has boosted its defense capabilities to curb threats from the North, has now become the No. 8 weapon seller, according to the Stockholm International Peace Research Institute. Yoon set the goal of ranking fourth last month.

The amount of the nation’s defense export stood at an annual average of $3 billion for many years until 2020, but increased to $7.25 billion last year, according to the presidential office. This year, the figure amounted to $17 billion, the highest level ever, due to a large-scale arms export deal with Poland worth $12.4 billion.

During his visit to the defense companies, including Korea Aerospace Industries, Hanwha Defense and Hyundai Rotem, in South Gyeongsang Province, the president expressed the government’s strong will to “foster the industry as a high-tech strategic industry that drives national security and the economy.”

South Korea needs to secure technological competitiveness to “develop game-changing weapon systems” for future warfare, improve research and investment conditions for defense companies and “build an ecosystem for the firms to grow autonomously” by shifting the industry structure to exports, he said while meeting company executives and officials. A system that could effectively coordinate partnerships among the government, military and businesses will be established for defense exports, he added.

The president said he believes that exports of defense products would contribute to the peace and stability of the international community and strengthen solidarity with the nation’s allies, vowing to “actively support” defense exports while maintaining a thorough military preparedness.

To this end, the government will establish a pangovernmental defense export support system to expand defense exports to other industries, such as nuclear power plants and construction.

At KAI, Yoon observed a test flight of the KF-21, a supersonic fighter jet currently under development. The first test flight of the KF-21 was conducted in July this year, with manufacturing scheduled to begin in 2026. A total 120 of the aircraft are expected to be deployed by 2032, and it will also be available for the export market.

The president was briefed on the status of fixed-wing aircraft such as the KC-100, KT-1 and FA-50 developed with domestic technology, as well as rotary-wing aircraft, such as the Surion and LAH.

Later in the afternoon, he also visited Hanwha Aerospace in Changwon, South Gyeongsang Province, and was briefed on the firm’s plans to develop weapons systems, including self-propelled artillery, armored vehicles, anti-aircraft weapons and uncrewed vehicles.

The president also observed the assembly process of the K239 Chunmoo, which has been confirmed for export to Poland. Hanwha signed a deal with the European country last month to provide Chunmoo multiple-launch rocket systems, with the first to be delivered as soon as 2023.

Regarding Hanwha Defense’s Redback armored vehicle, which is being prepared for export to Australia, Yoon expressed hope for “good results” in the global market beyond Australia.

Yoon also went to Hyundai Rotem in the same region and toured K2 tanks, K808 White Tiger and multipurpose uncrewed vehicles. The president conveyed his gratitude and encouraged them to work with pride, saying the “workers who work hard in the field are the main players leading our defense industry.”