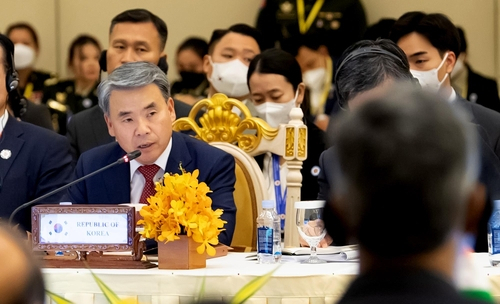 South Korean Defense Minister Lee Jong-sup has asked for international support to help induce North Korea to abandon its nuclear program and return to dialogue during a regional defense forum in Cambodia, his ministry said Thursday.

Lee made the appeal Wednesday at a key session of the ninth Association of Southeast Asian Nations Defence Ministers' Meeting-Plus in Siem Reap, Cambodia. It was attended by top defense officials of ASEAN member countries and others, including the United States, China and Japan.

He stressed the North's continued missile provocations, including a recent intercontinental ballistic missile launch, and its preparations for a nuclear test pose a "serious" threat to peace not only on the Korean Peninsula but also in the international community, according to the ministry.

Still, the South leaves the door open for dialogue with the North, Lee added, citing Seoul's "audacious initiative" designed to help the North improve its economy in return for denuclearization steps.

"(Lee) asked for member countries' active support and cooperation to induce the North to give up its nuclear program and come out for dialogue, given that if the North's nuclear and missile provocations continue, security on the peninsula will become more unstable and this would negatively affect peace and stability in the Indo-Pacific region," the ministry said in a press release.

Representatives from the US, Japan, Australia, New Zealand and the Philippines condemned Pyongyang's ballistic missile launches as a violation of UN Security Council resolutions and a "challenge" to global security, the ministry said.

Lee used the session to explain Seoul's new Indo-Pacific strategy that President Yoon Suk-yeol unveiled while in Cambodia to attend a series of ASEAN-related gatherings earlier this month.

The strategy focuses on promoting freedom, peace and prosperity in the region of growing strategic importance while seeking to cement the "rules-based" international order built on universal values.

Lee stressed that Seoul considers ASEAN the most important partner in the strategy.

The minister arrived in Cambodia earlier this week to attend ADMM-Plus, which ends Thursday. (Yonhap)