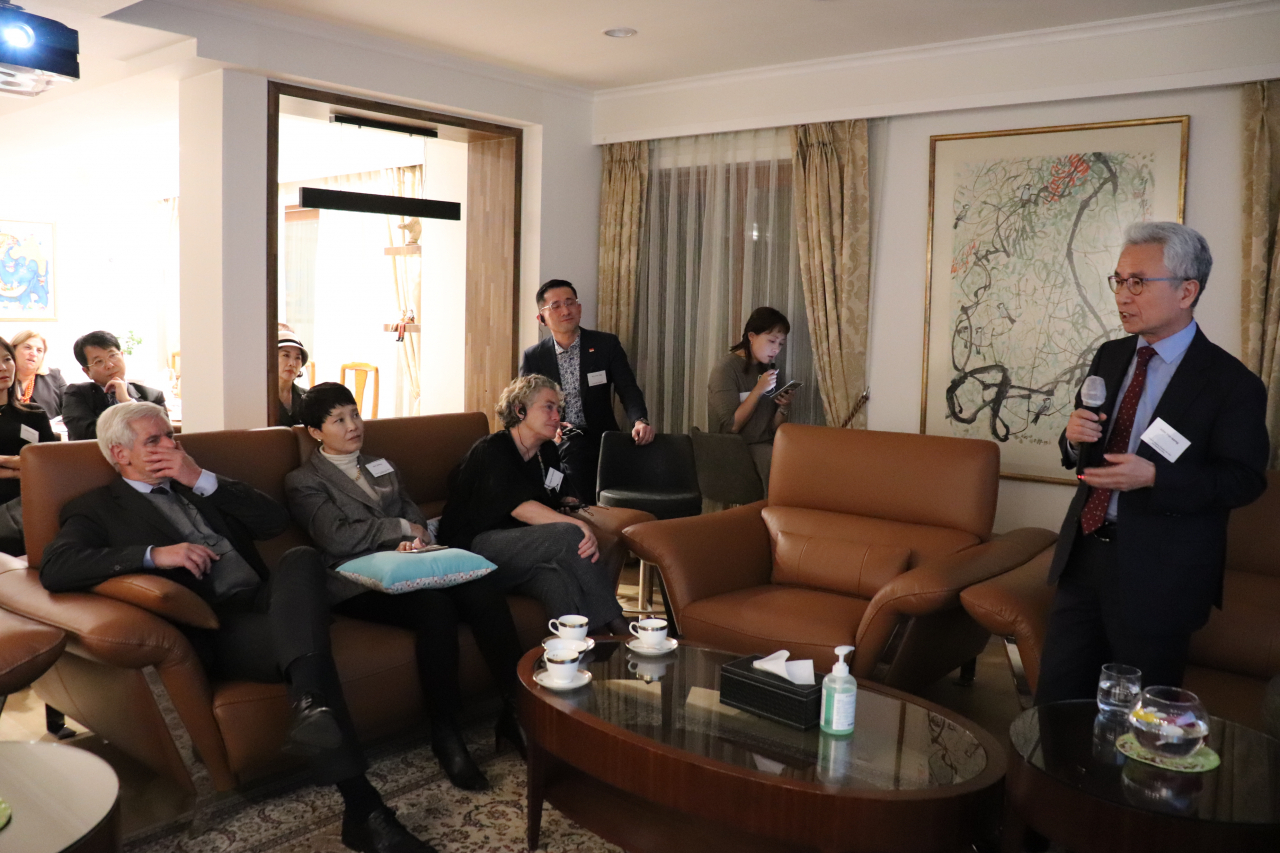 Ahn Ho-sang (first from right), CEO of Sejong Center for the Performing Arts, talks about Hallyu during a lecture titled "Korean traditional art and K-culture" at Singapore Ambassador's residence in Seoul on Tuesday. (CICI)

Delivering a lecture titled "Korean Traditional Art and K-culture" at the Singaporean Ambassador's residence in Seoul on Tuesday, the theater veteran with almost four decades of experience, said Hallyu is not likely to die down soon as it is beginning to be recognized as a distinctive genre.

"I think that the essence of the Korean Wave is not just Koreans' talent, but also the fiercely competitive structure of the Korean market that drives Koreans to leave the country (to seek success outside)," Ahn noted.

"It’s a very competitive market -- of the 40,000 or so college graduates each year, 30,000 join arts-related industries. When you see TV audition programs that are running for years, you see an inexhaustible supply of talents," he said.

According to Ahn, Korean people are compulsive, impulsive, irrational and fast and these traits, which could be seen as shortcomings, have somehow become their strong suits.

In addition, Koreans are very fond of Korea's own cultural products, be it music, movies, or dramas, which helped foster a unique ecosystem for K-culture, he added.

Due to this unique ecosystem that has developed over the course of past decades, Ahn said he believes Hallyu is unlikely to be just a fad.

"In 2013, when I visited a small city in Germany, I saw a young girl (with) a tattoo in the Korean language. I was told that learning Korean was popular among young people and that boom seems to have spread to those who lead the arts scene," he said.

"What I felt after meeting with leaders of European theaters last month, is they think collaborating with Korean artists is the fastest way to attract younger audiences,” Ahn said, adding that many Korean cultural products beyond K-pop and K-drama have been also earning the spotlight outside Korea.

Ahn has 38 years of experience in the country’s cultural scene, having served as the head of the National Theater of Korea and CEO of Seoul Foundation for Arts and Culture. He also worked at Seoul Art Center for 23 years from 1984. He took the helm at the Sejong Center in October 2021.