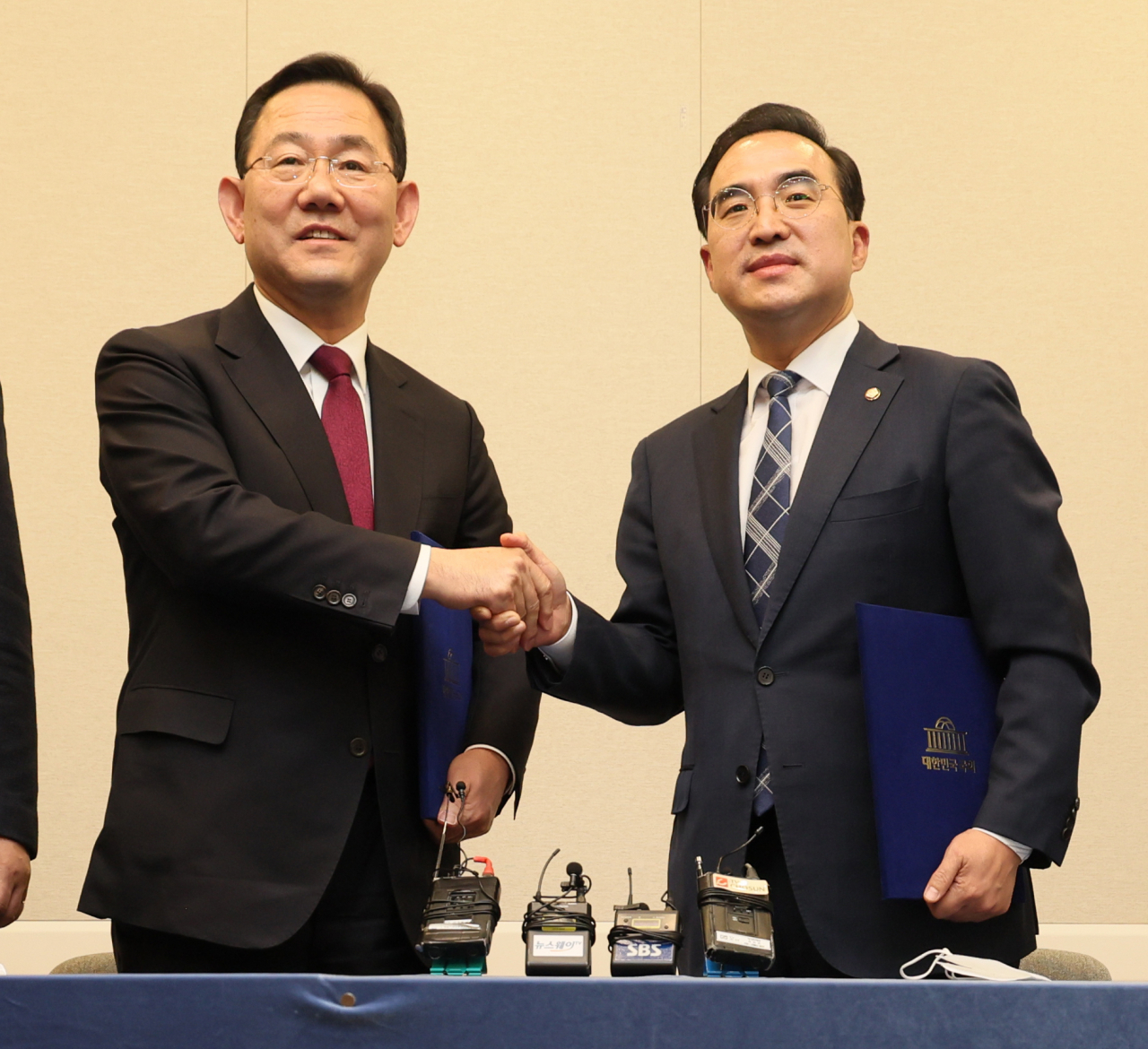 Rep. Joo Ho-young (left), the floor leader of the ruling People Power Party, and his main opposition Democratic Party counterpart Rep. Park Hong-keun shake hands after announcing the content of their agreement on a parliamentary probe into the Itaewon tragedy during a press conference held at the National Assembly in Seoul, Wednesday. (Yonhap)

The probe was to kick off on Thursday as soon as the assembly members approve the motion for the investigation. But the actual probe will begin after the National Assembly passes the national budget bill for next year, they said. The probe period could be extended later on, they added.

The committee will investigate 16 government offices and agencies tasked to secure public safety, including the presidential office, national crisis center, the prime minister's office and the interior and health ministries. It also includes the Supreme Prosecutors' Office, the police, the fire agency and the state affairs monitoring unit within the presidential office, but not the Presidential Security Service.

The agreement came hours after the ruling party backtracked on its previous stance that it would launch a parliamentary probe only if it finds the ongoing police investigation insufficient.

Earlier in the month, the opposition party with two minor parties -- Justice Party and the Basic Income Party -- had already submitted a request to launch a 60-day probe, arguing that they would push ahead with the plan even without the ruling party's participation.

Meanwhile, the country's prime minister said the government will make a full-scale change in its safety system, a set of protocols the government follows in responding to public events and gatherings, next month.

“(The government) is discussing measures to bring changes to the country’s safety system so that no such occasion like the tragedy in Itaewon takes place in the future,” said Prime Minister Han Duck-soo.

Han asked the Ministry of the Interior and Safety and the National Police Agency to carefully prepare so that changes can be properly made and implemented. Han also requested other related ministries to take comprehensive approaches in bringing changes to the safety system so that it can operate "without a flaw."

During the meeting, the prime minister also demanded authorities “be thoroughly prepared not to cause a single accident” during street cheering events scheduled for South Korea's matches during the World Cup in Qatar.