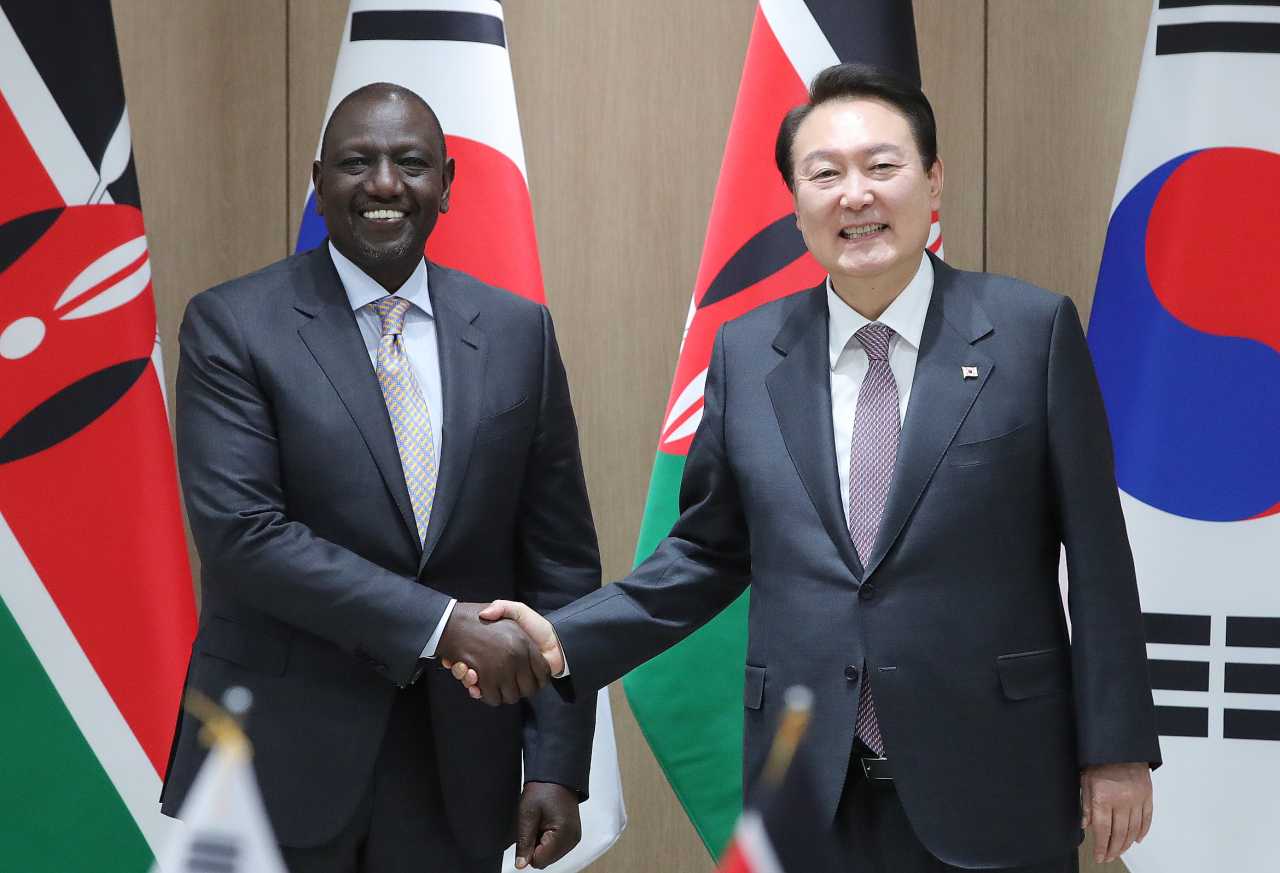 South Korean President Yoon Suk-yeol shakes hands with his Kanyan counterpart William Ruto before a bilateral summit at the presidential office in Seoul on Wednesday. (Yonhap)

Leaders of South Korea and Kenya on Wednesday agreed to expand economic exchanges in the areas of energy, defense and transport in the first bilateral summit that came in 32 years.

"Kenya is one of Korea's key partners in Africa where many of our major companies are running businesses. It is also the gateway (for businesses) to East Africa and is a center of logistics," Yoon said, adding that he hopes to bolster cooperation in different fields, including the economy.

"Kenya is a non-permanent member of the United Nations Security Council and a country leading the East African community. Kenya has traditionally been a friendly nation for South Korea since the establishment of diplomatic ties in 1964, under the values of liberal democracy," he said.

Yoon also promised to cooperate to help Kenya minimize damage from the serious drought the country is currently suffering, and provide new varieties of rice to help the country improve food security.

"The two countries have maintained good relations and (the relationship) is built upon common values and principles including multilateralism," Ruto said.

"Since Kenya declared independence in 1964, we have been developing the ties well, and how well we maintain our embassies in respective countries shows this."

Kenyan President William Ruto came to visit Seoul upon Yoon's invitation. It is the first visit by a Kenyan president to the South Korea in 32 years. The two countries established diplomatic ties in 1964.

After the summit, the two countries inked a $1 billion deal for the Economic Development Cooperation Fund, South Korea's representative aid fund for promotion of economic cooperation with developing countries established in 1987, the office said.

Expressing confidence in the country’s market potential, the Kenyan president also said his government is ready to support Korean investors and businesses with benefits, including tax and other necessary instruments to facilitate more trade and investment between the two countries.

“The opportunity that Kenya presents to investors and business people in this part of the world is not just about investment opportunities. It’s bigger than that. It’s an opportunity in Kenya and into the continent of Africa,” Ruto said in his speech.

“Africa presents the opportunity of the future. It’s the next-born child for development for business and for investment.”

The Kenyan president also underscored his country’s potential -- how it has the youngest population and marks the highest return on investment. He also stressed that Kenya is a signatory to many international agreements of regional groups, including Africa and the European Union, which can open more opportunities for foreign businesses in Kenya.

The Kenyan government also inked partnerships with Korean government entities and civic associations at the forum.

Kenya National Chamber of Commerce and Industry separately signed memorandums of understanding with Korea Institute of Procurement, and SDG Youth. Korean Professional Engineers Association and the Engineers Board of Kenya also forged a partnership there.

Prior to the forum event, Ruto also met parliamentary speaker Kim Jin-pyo earlier in the day.