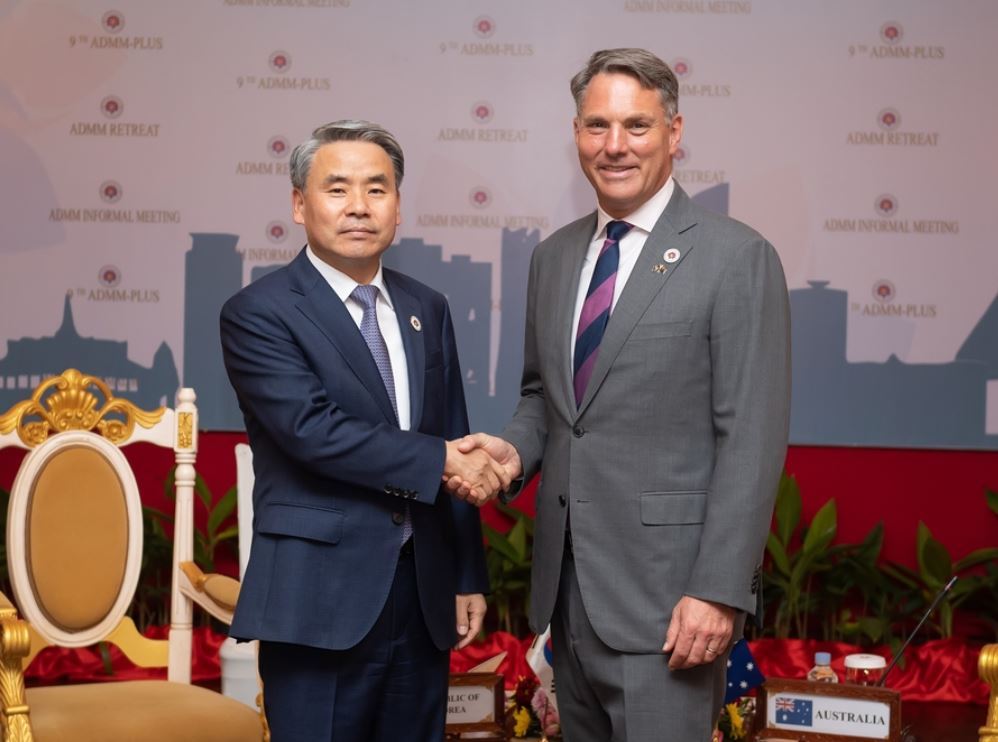 Defense Minister Lee Jong-sup (left) shakes hands with his Australian counterpart, Richard Marles, as they meet for talks on the sidelines of the Association of Southeast Asian Nations Defense Ministers` Meeting-Plus in Siem Reap, Cambodia, on Nov. 22, 2022 in this photo released by Lee`s office. (Yonhap)
The defense chiefs of South Korea and Australia held talks in Cambodia on Tuesday to discuss bilateral cooperation in the arms industry and other security areas, Seoul's defense ministry said.

They agreed to push to bolster people-to-people exchanges in the defense sector, increase the frequency and level of bilateral and multilateral military drills and expand arms industry cooperation with an aim to enhance interoperability between the two countries' militaries, according to the ministry.

The two sides also agreed to pursue the establishment of "institutional foundations" for combined military drills and cooperation in the defense science and technology sector.

In addition, they agreed to find ways for "future-oriented" cooperation through close coordination in the process of Seoul and Canberra drawing up their defense enhancement plans, the "Defense Innovation 4.0" and "Defense Strategic Review," respectively.

Seoul's Defense Innovation 4.0 initiative is aimed at harnessing cutting-edge technologies, such as artificial intelligence, to address a potential troop shortage that can be caused by the country's low birthrate, and bolster overall defense capabilities.

Lee and Marles shared the view that North Korea's push to advance its nuclear and missile capabilities and its provocations pose a threat not only to peace and security on the Korean Peninsula but also in the international community.

They condemned the North's recent missiles launches, including that of an intercontinental ballistic missile, and agreed to work together to muster up the resolve of the international community to have the North abandon them and return to dialogue, according to the ministry. (Yonhap)