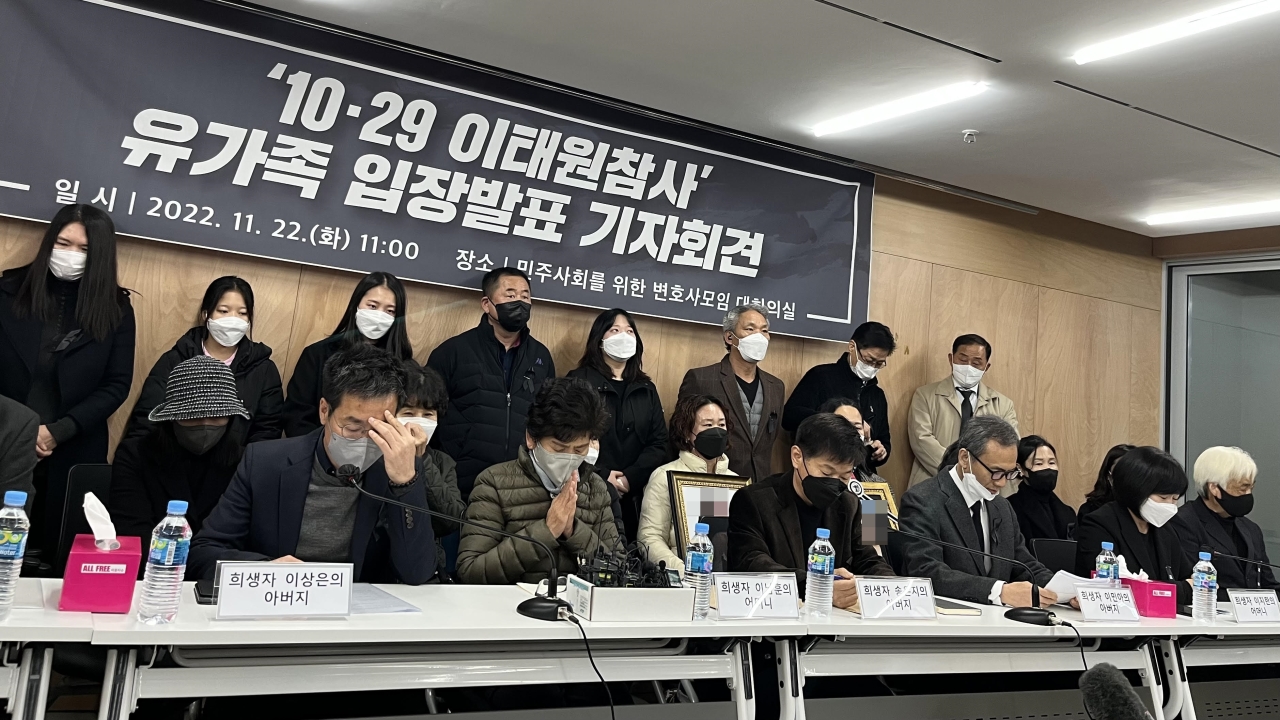 The family members of the Halloween crowd crush victims speak at a press conference on Tuesday at the office of Mibyun in Seoul. (Kim Arin/The Korea Herald)
The bereaved families of the Halloween crowd crush victims spoke out for the first time on Tuesday, demanding the government for a sincere apology and clarification on who is responsible for their deaths.

“We still don’t know what killed my son and why he had to die,” said the mother of Lee Nam-hoon, a 29-year-old who is among the 158 deaths from the night of the Halloween festivities.

On Oct. 29, Itaewon, a central Seoul district known for its nightlife, was filling with young people celebrating the first Halloween without social distancing in nearly three years. Huge crowds occupied the narrow alleys, and suddenly hundreds became trapped and crushed.

Twenty-eight family members of the deceased, including Lee’s mother, gathered at the office of Lawyers for a Democratic Society, or Minbyun, in a first press conference held since.

“The authorities couldn’t explain to us exactly when my son died, or whether he was able to at least receive resuscitation in his last moments,” she said. “If people in politics care about the pain of parents who lost their children, they should investigate what happened properly and apologize for failing to save young lives. This is your fault.”

The father of Lee Sang-eun, 25, said she was “the brightest kid” who had just gotten her accountant license. Two days after she died, her dream company gave her a job offer. “But she wasn’t there to get it,” he said.

In a letter to his daughter that he read in the conference, he said, “It’s hard to accept that you are no longer in this world. But I have to let you go, so you don’t look back. Don’t worry about mom and dad. We will meet again.”

He said he had “a duty to ask on behalf of (his) daughter. ‘What was the government doing to protect the safety of its people?’”

Lee Ji-han, 24, had a bright future waiting for him, his mother said.

“He worked hard for his dream. He studied acting and theater at the university, and he signed with a big agency,” she said. “He had a TV series coming up in December so he wasn’t eating much, always working out.”

That day, Lee told his mother that he’d be back soon after dinner. He had to shoot the next day.

“Then I was told hours later that my son had died. I couldn’t believe it until I went to the hospital and saw him there with my eyes. He looked thin, and like he hadn’t been eating,” she said.

She said the evidence that soon surfaced showed the police “just looked on and did nothing as so many young people were dying.”

“I don’t know the laws very well, but I can’t help but think this is murder -- murder by omission. There were very specific calls for help as early as 6:34 p.m. Their negligence and incompetence killed our children.”

She said that if it had been the children of a minister or a mayor who were asking for help, “things would have been different.” “I don’t think the police could afford to be so negligent if that were the case,” she said.

In the middle of the conference, one of the parents who didn’t initially agree to speak had to be escorted out as he was appearing to faint. “I want my son back. Please bring my son back,” he said.

When he returned, he said he recently began taking medication to cope with sleeplessness. After the conference was over, he showed reporters and other people in the room the photograph of his son on his cellphone, saying, “Look, this is my son.”

Yun Boknam, a lawyer at Minbyun, said that so far families of 34 deceased victims have consulted Minbyun.

“After several rounds of meetings, we’ve established that there should be an official apology from the president, and efforts to bring accountability to all those who are responsible. The government should create a channel for bringing the families who suffered the same pain together as well,” he said.

“The families were also facing bullying online, against which the government needed to take action.”

Yun, who is leading Minbyun’s efforts to consult the families, added that the families haven’t gotten around to discuss concrete steps for a legal action against the government or officials.

The Korean Bar Association, also on the same day, said it was launching a task force for providing legal assistance to the families of the victims and survivors.

Meanwhile, the Yoon Suk-yeol office said in a release it has yet to decide on whether to draft a special law for compensating the families of victims and survivors of the tragedy, denying an earlier report by a local news outlet that it is planning to so. So far the families were given 20 million won ($14,700) in compensation and up to 15 million won for funeral expenses.