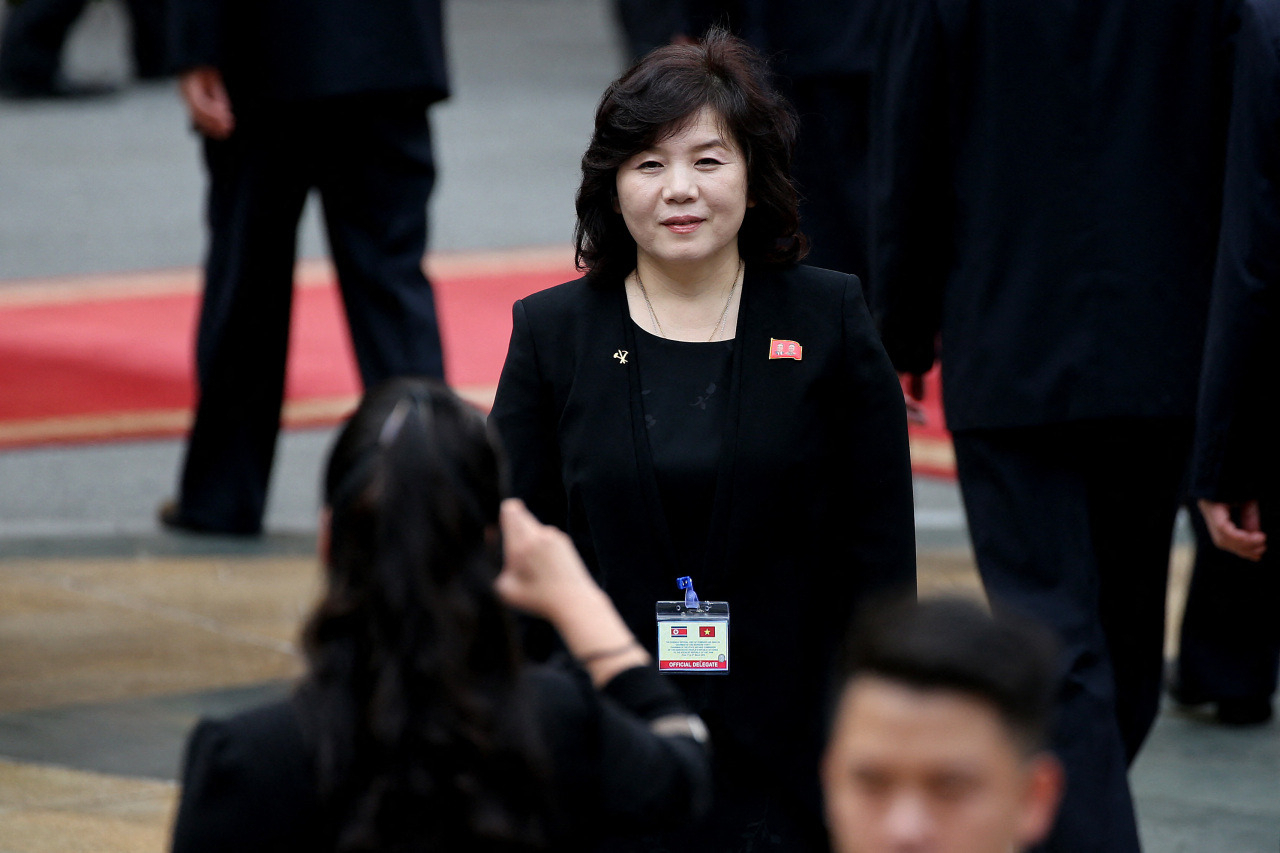 North Korean Minister of Foreign Affairs Choe Son-hui, who was then a vice minister, poses for a photo ahead of the welcoming ceremony for North Korean leader Kim Jong-un at the Presidential Palace in Hanoi, Vietnam, on March 1, 2019. (AFP-Yonhap)

As the United Nations Security Council was to convene an open meeting on Monday to discuss countermeasures to North Korea’s latest launch of an intercontinental ballistic missile, Pyongyang denounced the UN chief as “not impartial,” calling him a “puppet” of the United States.

The Korean Central News Agency on Monday delivered a statement issued by North Korean Foreign Minister Choe Son-hui, where she denounced UN Secretary-General Antonio Guterres for his condemnation of Pyongyang’s ICBM launch and called him a “puppet” of the US.

"I express my strong regret over the fact that the UN secretary-general has taken a very deplorable attitude, oblivious of the purpose and principles of the UN Charter and its proper mission, which is to maintain impartiality, objectivity and equity in all matters," Choe said in the English-language statement.

North Korea launched its massive new Hwasong-17 ICBM on Friday, which it called a “new strategic weapon system” that can prove the powerful combat performance of the regime.

Via its state media KCNA, Pyongyang revealed that the ICBM was launched from Pyongyang International Airfield and flew 999.2 kilometers for one hour, eight minutes and 55 seconds seconds at an apogee of 6,040.9 kilometers. The missile landed in the international waters of the East Sea, the news agency said.

Following North Korea’s ICBM launch, UN Secretary-General Antonio Guterres issued a statement to strongly condemn Pyongyang for its launch of the ICBM, and urged the regime to “immediately desist from taking any further provocative actions.”

Choe, however, defended Friday’s launch of the Hwasong-17 as a “legitimate and justice exercise of the right to self-defense,” against the threats posed by Washington and its joint military drills with allies around the Korean Peninsula.

"Nevertheless, the UN secretary-general shifted the blame for the case onto the DPRK, rather than the US,” Choe said, referring to the North's formal name, the Democratic People's Republic of Korea.

"The UN secretary-general connived at the fact that the US and its vassal forces were referring the DPRK's exercise of its inviolable sovereignty to the UN Security Council to put pressure on it. This clearly proves that he is a puppet of the US," she added.

After the launch of the ICBM, Japan announced the missile appeared to have fallen inside its exclusive economic zone, 210 kilometers off Hokkaido. Raising concerns on the North Korean threat, Japan made the request to the UNSC for an emergency meeting to take place Monday in New York.

South Korea was to attend the meeting as a country directly involved in the issue, according to its Foreign Ministry.

While major countries around the world have raised voices against the latest ICBM test, in which the weapon was observed as capable of flying as far as 15,000 kilometers -- enough to reach the US mainland -- it is still unclear whether the UNSC will be able to draw a consensus to impose some kind of a penalty against Pyongyang.

China and Russia, two permanent members of the council with veto power, have backed Pyongyang’s military actions as reasonable reactions to US military drills around the Korean Peninsula.

On Sunday, top diplomats of the Group of Seven nations -- Canada, France, Germany, Italy, Japan, the United Kingdom and the United States -- issued a joint statement calling for strong responsive measures from the UNSC against Pyongyang’s missile launch.

“(North Korea’s) actions demand a united and robust response by the international community, including the need for further significant measures to be taken by the UN Security Council,” said the statement issued by the foreign ministers of the seven countries said.

The Hwasong-17, known to be Pyongyang’s biggest missile yet, has been dubbed a “monster” missile for its size. It is potentially capable of carrying multiple warheads.