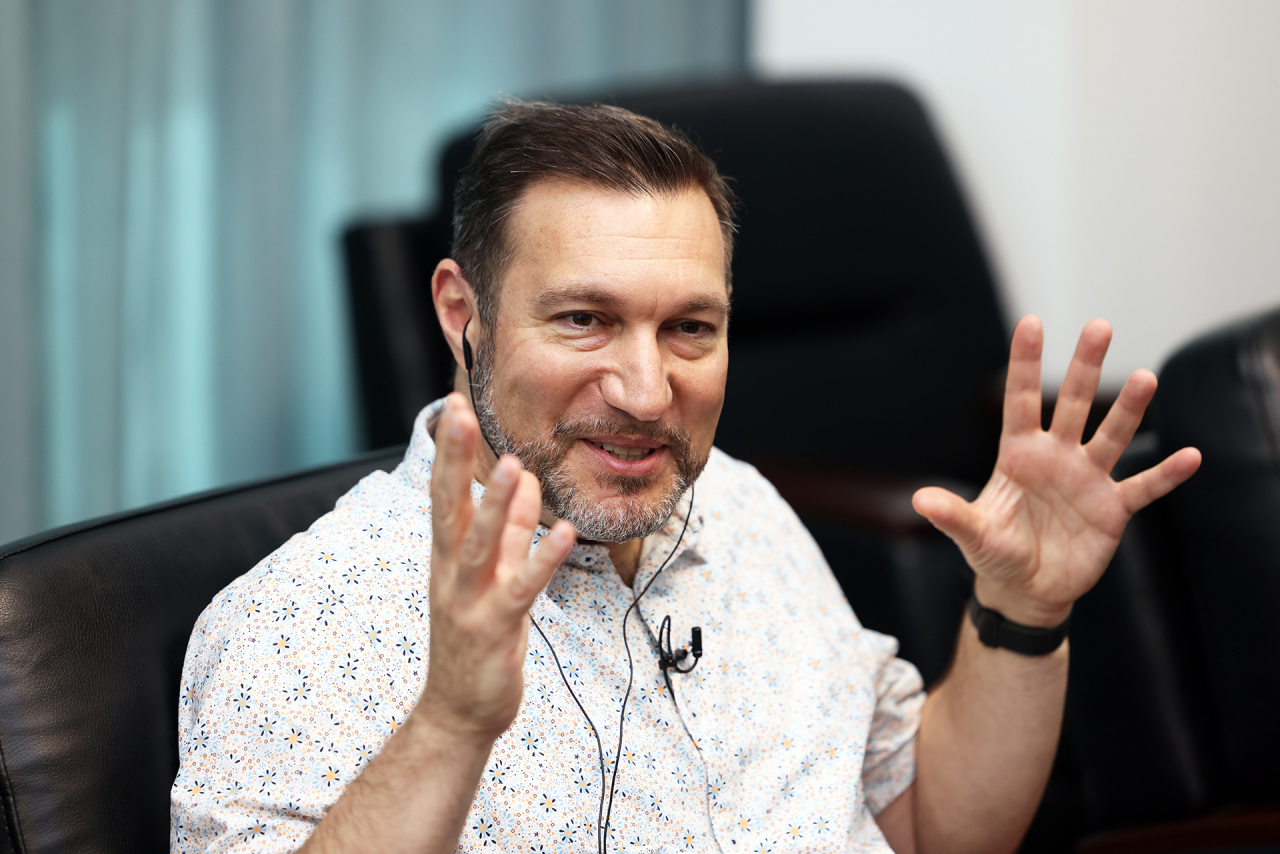 Steve Papoutsis, chief development officer at Striking Distance Studios, speaks to reporters in a group interview at G-Star in Busan on Thursday. (Krafton)

BUSAN -- South Korea is poised to succeed in the global console game market despite having a relatively shorter resume in that particular area of gaming, according to an expert specialized in creating successful console games.

“Many years ago, I first found out how excited Korean players were for video games when StarCraft became a global sensation. It was very fascinating to see that Korea was so excited about that,” said Steve Papoutsis, chief development officer at Striking Distance Studios, in an interview with a group of reporters at Korea’s game convention G-Star in Busan last week. Striking Distance Studios, an independent game developer based in California, is a subsidiary of Korean game maker Krafton.

“From my perspective, I think Korea is set up to have success in the gaming market because there are so many passionate individuals here that care about gaming, so I think it’s a very great country for opportunity for video games right now,” he said.

Papoutsis, who has over 30 years of experience in creating console games including the global hit series Dead Space, has been leading the development process of The Callisto Protocol -- an upcoming survival horror action game with the background set in the deep space. The Callisto Protocol will be released on December 2 for PC, Sony PlayStation and Xbox.

The Korean game industry has not made a big splash in the global console game market as most of its major developers have put emphasis on computer and mobile games up to this point. Regarding the country’s movement towards producing a hit console game, the CDO emphasized the importance of keeping everybody involved in the development process on the same page.

“The theme of the conversation today is about having a vision, being able to share that vision with your team, getting everyone focused around delivering a great experience for your players and just remaining focused on that,” said Papoutsis.

He added that communication is an imperative element, highlighting that all members of the team should clearly understand the shared vision, think about what the players are going to experience and push to make the best experience possible.

According to a report from ResearchAndMarket, the global console game market was estimated at $65 billion in 2021 and is expected to reach $104 billion in 2026 with a compound annual growth rate of 9.4 percent. The Korea Creative Content Agency has estimated that the country’s console game market sales surpassed 1 trillion won ($727 million) for the first time in 2021.

“As I walk around G-Star, I see a lot of interesting ideas and would love to see those come to console. The more great experiences that help grow the video game community, the better. So I’m very excited, interested and positively optimistic that great things will come,” said Papoutsis.