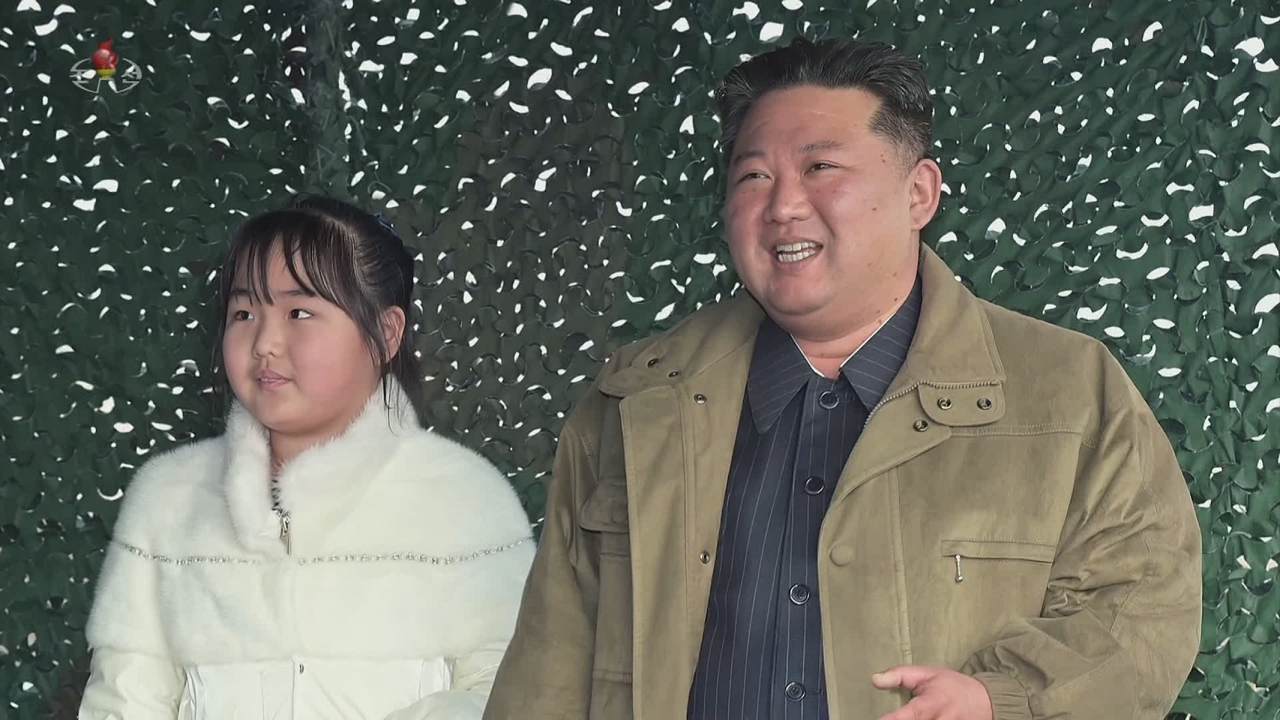 North Korean leader Kim Jong-un stands with his daughter at a missile launch site in this photo released by the Korean Central News Agency on Saturday. (Yonhap)

North Korean leader Kim Jong-un revealed his daughter to the world for the first time on Saturday, in photos of him holding a young girl’s hand as he inspected the launch of an intercontinental ballistic missile. Experts say the unexpected event manifests Kim’s confidence in his missile program, and that it could possibly signal the beginning of her training for leadership succession.

The Korean Central News Agency, Pyongyang’s state media, said on Saturday Kim observed the test-firing of Hwasong-17 ICBM on the previous day, with his wife Ri Sol-ju and “beloved daughter” -- officially confirming her existence for the first time.

On Sunday, the KCNA released additional photos of Kim and his daughter visiting the missile test site on Friday.

In the photos, Kim is seen observing the regime's largest missile launch while holding hands with a young girl in a white jacket and red shoes.

The KCNA reported that Pyongyang launched the “new” missile from Pyongyang International Airfield, and it flew 999.2 kilometers for 4,135 seconds at an apogee of 6,040.9 kilometers. The missile landed in the international waters of the East Sea, the news agency said.

"The test-fire clearly proved the reliability of the new major strategic weapon system to be representative of the DPRK's strategic forces and its powerful combat performance as the strongest strategic weapon in the world," KCNA said in an English-language report. DPRK stands for Democratic People's Republic of Korea, the official name of North Korea.

According to assessments by Seoul and Tokyo, Pyongyang appears to have succeeded in advancing its ICBM to fly far enough to hit the US mainland. 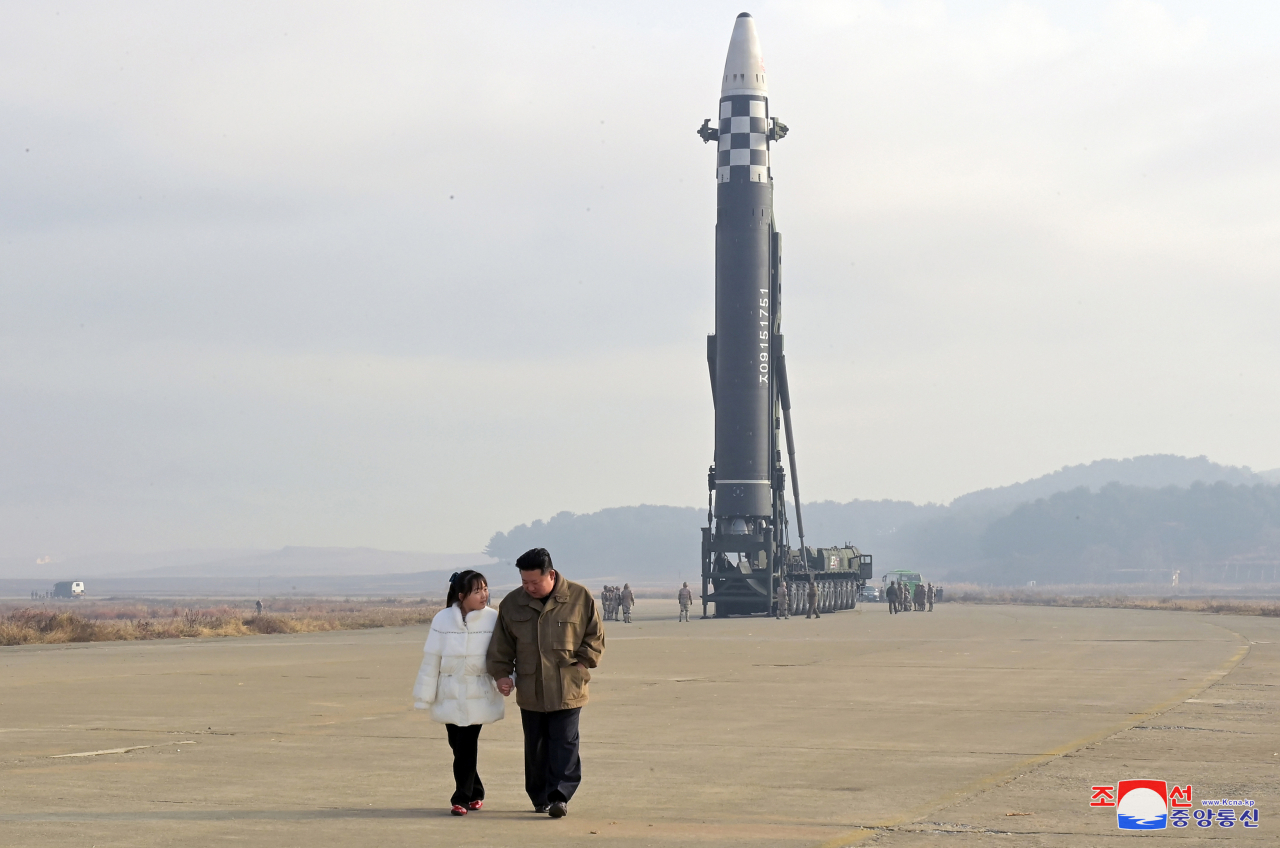 North Korean leader Kim Jong Un and his daughter walk away from an intercontinental ballistic missile in this undated photo released on Saturday by KCNA. (Yonhap)

The launch was a countermeasure to the “reckless military confrontational moves of the US and other hostile forces” that drive regional security to the “red line,” going beyond the limit, the KCNA also said.

Pyongyang has been critical of South Korea and the US for conducting joint military drills involving American strategic assets, such as B-1B and B-52 bombers and a nuclear powered aircraft carrier, saying they undermine the regime’s authority.

Experts view Kim’s first revelation of his daughter as a sign of his confidence in the advancement of the missile program. At the same time, it possibly hints at Kim’s intent to hand over leadership to his bloodline, experts say.

Hong Min, a senior researcher at the Korea Institute for National Unification’s North Korean research division, suggested that the North Korean leader bringing his family to watch the missile launch is intended to show off his confidence in the stable operation of the Hwaseong-17.

"It shows that (Hwaseong-17) is an important asset that guarantees the safety of the future generation," Hong said.

If the North Korean leader expected the missile launch would fail, he would not have brought his wife and daughter to the test site, Lim Eul-chul, a professor of North Korean studies at Kyungnam University in Seoul, said.

“It is highly significant and represents a certain degree of comfort on Kim Jong-un's part that he would bring her out in public in such fashion."

According to Madden, Ju-ae is believed to be aged between 12 and 13, and she would likely be preparing to attend a university or go into military service in four to five years.

"This would indicate that she will be educated and trained to go into leadership -- it could be preparing for her to assume the central leader's position, or she could become an adviser and behind-the-scenes player like her aunt," he said, adding Kim may be showing his intent about the fourth-generation power succession.

While very little is known about Kim’s family, the girl revealed on Saturday is believed to be the oldest daughter of Kim, who is believed to have as many as three children – two girls and a boy.

Retired American basketball star Dennis Rodman mentioned that Kim has a daughter named Ju-ae in a 2013 interview, following a visit to North Korea. Rodman said he had spent time with Kim’s family, and had “held their baby Ju-ae.”

Last week’s launch of the ICBM is the eighth this year, and came about two weeks after the last test-fire on Nov. 3, which was observed to have ended in failure.