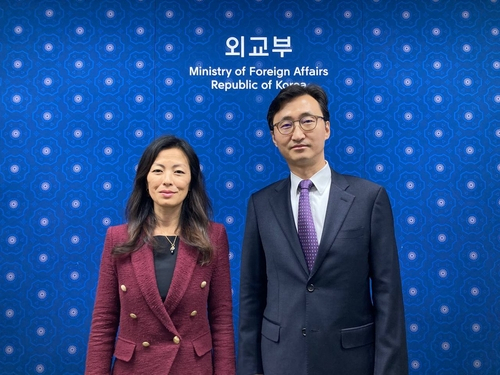 South Korea's deputy nuclear envoy Lee Tae-woo (R) and his U.S. counterpart, Jung Pak, pose for a photo during their meeting in Seoul on Nov. 16, 2022, in this photo released by the South Korean foreign ministry.(Yonhap)

South Korea and the United States on Wednesday agreed to continue coordination to cope with North Korean activities in the cyber realm, the foreign ministry said.

Lee Tae-woo, the director-general for North Korean nuclear affairs, met his US counterpart, Jung Pak, along with around 60 diplomatic, security and intelligence officials from both countries, the ministry said.

During the meeting, which marked the second of its kind since August, the two countries shared updates on the situation in which North Korean information technology experts dispatched overseas earn foreign currency, with the funds being used for the reclusive regime's nuclear and missile projects.

South Korea and the US also exchanged specific cases and methods of North Korea's illegal activities online, including extortion of cryptocurrencies, and shared ideas on ways to effectively cope with the situation.

The two countries exchanged opinions on how to deal with facilitators who support North Korea's money laundering as well, the ministry said.

South Korea and the US agreed to continue related discussions by holding another meeting at an "appropriate time," it added. (Yonhap)