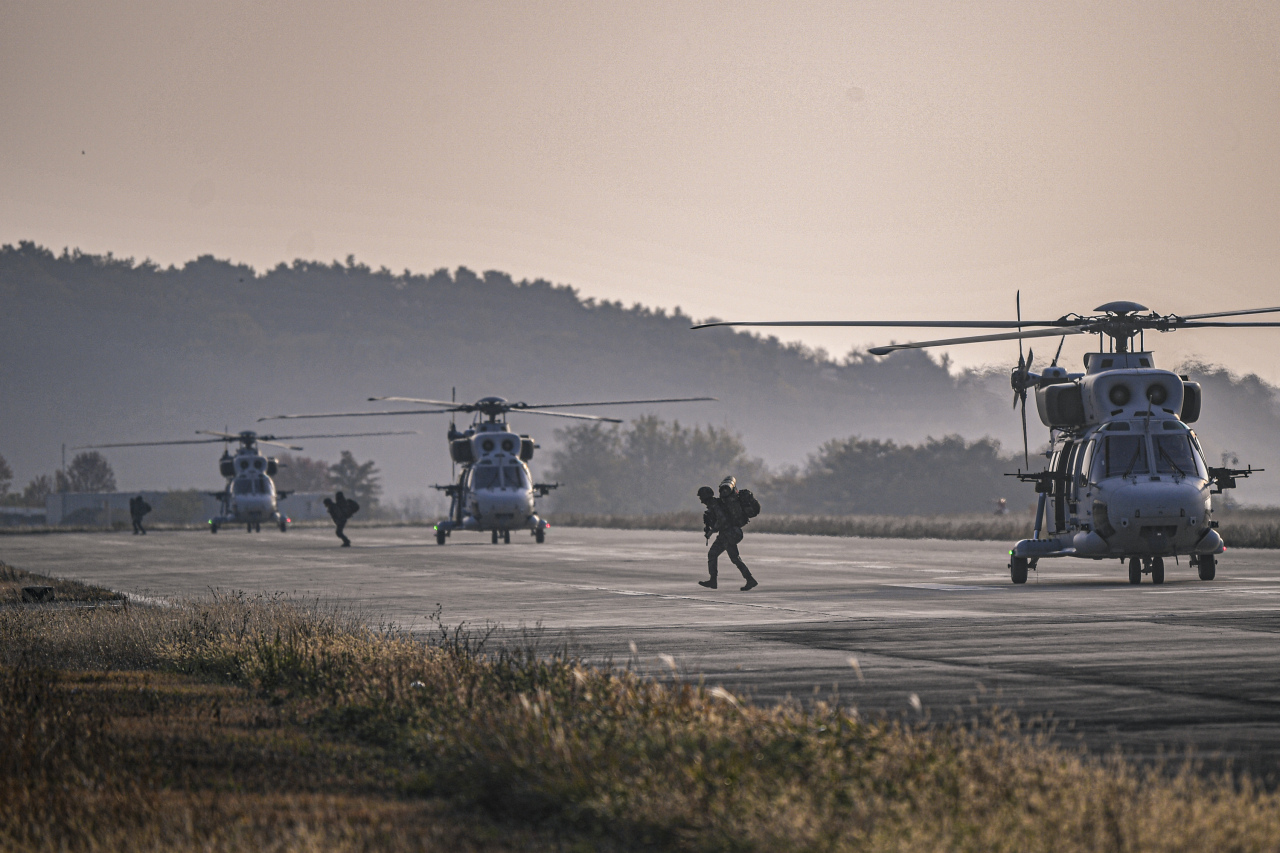 South Korean Marines move into positon on a beach during a landing operation as part of the annual Hoguk military exercise in Pohang, South Korea October 26, 2022. (Republic of Korea Marine Corps)
WASHINGTON -- South Korea should concentrate on averting a second contingency on the Korean Peninsula in the event of China’s invasion of Taiwan, says Michael O’Hanlon, a senior fellow and director of research in foreign policy at the Brookings Institution.

“South Korea should make it clear to China that if China were to attack Taiwan, it could not consider business as usual,” O’Hanlon said in an interview with The Korea Herald on Nov. 2 at the Brookings Institution in Washington.

But in a Taiwan contingency, it is most important for South Korea to maintain its own strong deterrence vis-à-vis North Korea and to keep diplomacy with North Korea “steady enough” to prevent any possibility of North Korea escalating tensions that could lead to a war.

O’Hanlon said he doesn’t necessarily expect South Korea to “play a big role” in the event of a war over Taiwan when asked how the South Korean military can contribute to defending Taiwan.

“I think Americans should accept that possibility. It might be nice if South Korea participated militarily, but we should not assume it and we should not pressure South Korea,” O’Hanlon said. “There’ll be enough for South Korea in that situation to keep the peace on the Korean Peninsula to make sure that we don’t have a two-front war.”

But if South Korea considered the Chinese aggression as unprovoked and grave and did want to provide support, the country could look for options. For instance, South Korea could permit US combat aircraft participating in a war with China to station at South Korean military bases for re-arming and refueling, as well as maintenance and repair.

In addition, the US should not mobilize the 28,000 US forces on the Korean Peninsula for an armed conflict over Taiwan, to avoid a second-front contingency.

“We want to make sure North Korea does not get any temptation to use that conflict over Taiwan as an opportunity to attack the South,” O’Hanlon said. “I think that’s the most important starting point.”

South Korean President Yoon Suk-yeol said in an interview with CNN in September that South Korea’s top priority would be to counter North Korean provocations based on the strong South Korea-US alliance if China were to invade Taiwan. Yoon explained that China’s invasion of Taiwan would increase the chances of North Korea making provocations, indirectly admitting South Korea’s limited bandwidth given to peace and stability across the Taiwan Strait.

But O’Hanlon underscored that South Korea should build up capabilities and resilience so that it can play a role on economic fronts in a Taiwan contingency.

“Even if it’s not drawn into direct military scenarios necessarily, it should be in a position to put economic sanctions on China and survive that process without having China retaliate in a way that essentially brings South Korea to its knees,” O’Hanlon said.

South Korea, for instance, should seek to lower its high dependence on China for importing key high-tech products including semiconductor chips as well as daily necessities and pharmaceutical raw materials.

O’Hanlon said the US should not put pressure on South Korea to position itself against China or to give the US permission to threaten the use of US Forces Korea against China, when asked about the strategic difference between the US and South Korea over scope of deterrence posture.

“The most important thing is not to force South Korea to be drawn into an anti-China containment strategy when South Korea has to live near China and needs to think about its long-term relationship with China in a way that is different from how we have to think about it here.”

While the US-South Korea alliance should focus on maintaining peace and stability on the Korean Peninsula, the US-Japan alliance is the “primary instrument for dealing with hypothetical threat scenarios that would concern China.” 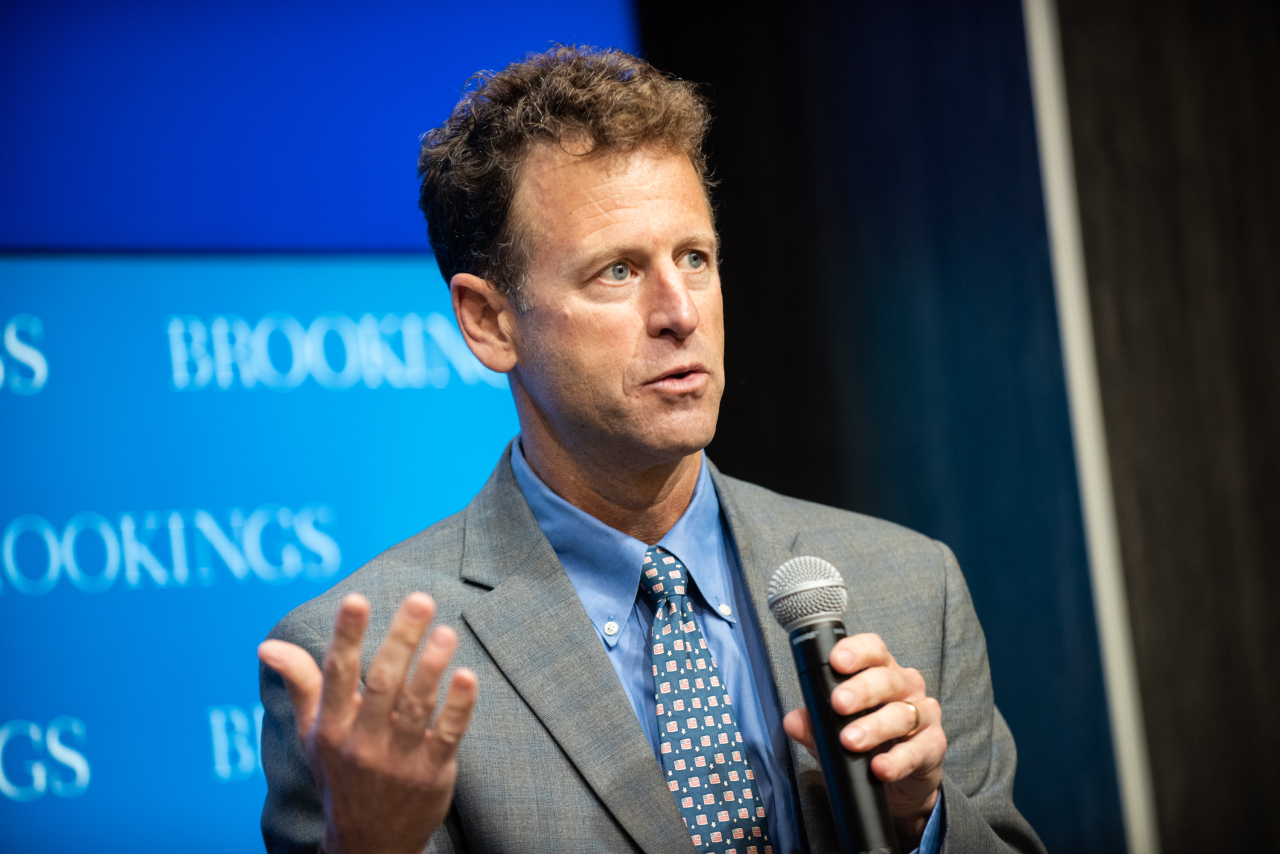 O’Hanlon said the US and South Korea should recalibrate its North Korea policy and establish a serious negotiating strategy that can incentivize North Korea to opt into a step-by-step process toward complete denuclearization.

The current dynamics are partly a function of the absence of negotiations and communications among the US, South and North Korea.

“So that’s part of why we need a serious negotiating strategy on the nuclear program. What we need to do is to communicate with North Korea. That is about a positive vision for the future and not about who can scare the other side more. Because if we get into this game of brinkmanship or fear-mongering, the next step could be even more dangerous than the last step,” O’Hanlon said.

“The best response to this low-grade brinkmanship is to give the peace process or the negotiation process, some vision for positive progress.”

But North Korean leader Kim Jong-un publicly underscored that his country will never give up on nuclear weapons, and therefore, “there will be absolutely no denuclearization first and no negotiation to that end” in his key policy speech in September. Kim labeled nuclear weapons as the country’s “absolute force” and “national dignity.”

Apart from Kim’s pledge, Kim’s intent to avoid the same fate as Saddam Hussein and Moammar Gadhafi, and his high tolerance for other people’s pain, suggest that North Korea’s abandonment of nuclear weapons is on the off chance.

“When we put all this together, it’s hard to imagine any package of economic sanctions or anything else that could persuade him to give up all of his nuclear weapons,” O’Hanlon said.

Incentivizing N. Korea
The US and South Korea therefore should come up with a strategy that can achieve complete denuclearization step by step and incrementally.

“We have to start more incrementally, and we should try to persuade him (Kim Jong-un) to allow verifiable dismantlement of nuclear production capability for uranium centrifuges, plutonium reactors, and plutonium reprocessing facilities, and also a permanent ban on nuclear and long-range missile testing in exchange for a partial lifting of sanctions with a particular focus on UN sanctions,” he said. “That’s what I would recommend.”

In the first stage, the US essentially should focus on seeking North Korea’s “complete and verifiable dismantlement of nuclear production capability” to prevent the country from acquiring materials to produce more nuclear bombs. But in the meantime, the US simply ignores existing nuclear arsenals that North Korea possesses and does not recognize and negotiate about them.

Against that backdrop, O’Hanlon said he would not call the step-by-step process an arms control deal, which he views as having implications that the US has recognized North Korea has the right to nuclear weapons.

O’Hanlon also underscored that “any serious negotiation needs to start without preconditions.”

As the US has continued to insist that North Korea must get rid of all nuclear weapons in any future deal, it has essentially prevented any negotiation getting started. O’Hanlon explained that North Korea would perceive its engagement in talks as a concession.

“The only precondition I would have for negotiations is no use of force during the negotiation.”

Deterrence fundamentals
O’Hanlon said the US and South Korea should first and foremost clarify that the allies are prepared to improve relations with North Korea and discuss a positive vision with it.

But at the same time, the allies can remind North Korea that the allies would take other steps to enhance their deterrence if North Korea continues to take escalatory steps.

When asked whether redeployment of US tactical nuclear weapons and NATO-style nuclear sharing agreement are viable options to enhance the alliance’s deterrence, O’Hanlon said he did not endorse the options. The options will most likely ratchet up tensions and provoke North Korea, according to him.

“I don’t really think it benefits us that much. We already have plenty of usable nuclear weapons options using long-range systems,” O’Hanlon said.

“I’m not suggesting that we should rule it out completely. … Maybe it’s time to tell North Korea ‘if they keep these nuclear and missile tests going, we may have to consider other options ourselves.’”

O’Hanlon underscored that the current US-South Korean deterrence arrangement has been effective in deterring North Korea from waging a war and attacking South Korea.

“We clearly are, at the moment, dissuading North Korea from any attempt to forcibly reunify the peninsula or kill large numbers of South Koreans or conquer certain parts of South Korean territory. So for that, deterrence looks pretty good right now,” O’Hanlon said.

The Yoon Suk-yeol government has signaled a preference for strategic clarity amid the intensifying US-China rivalry, jettisoning its predecessor’s balancing act.

But in Seoul, policy discussion on South Korea’s Indo-Pacific strategy has focused less on the country’s potential role in the event of China’s invasion of Taiwan and more on how it will counter threats from North Korea.

The absence of a face-to-face meeting between President Yoon Suk-yeol and US House Speaker Nancy Pelosi during her trip to South Korea in August, which came right after her visit to Taiwan, illustrated the dilemma South Korea faces over Taiwan Strait issues.

If a Taiwan contingency were to break out, South Korea would inevitably be under enormous pressure from both the US and China. Experts share their views on South Korea’s role in a possible military conflict between the US and China over Taiwan in their in-person interview with The Korea Herald in Washington before the 54th South Korea-US Security Consultative Meeting.  -- Ed.