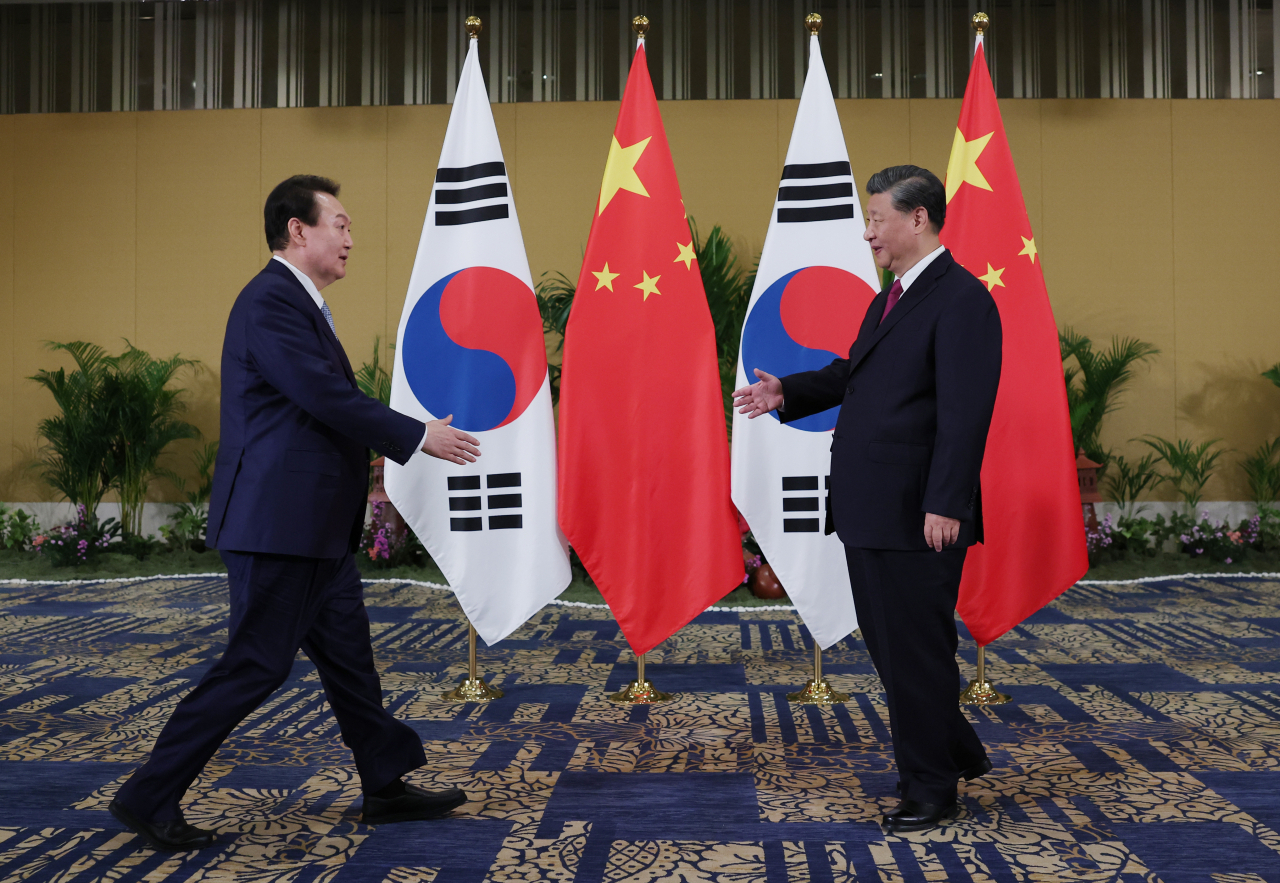 President Yoon Suk-yeol and Chinese President Xi Jinping held a 25-minute talk in Indonesia during the G20 Summit on Tuesday. It has been three years since the last Korea-China summit was held at the Great Hall of the People in Beijing, during the former Moon Jae-in government.

The presidential office thought the possibility of the bilateral talks was low even until the US-China summit, but they confirmed the meeting about seven hours before it was held. After the meeting, both countries released their own versions of statements.

The statement released by South Korea included Yoon’s remarks on demanding China’s response to North Korea’s continued threats, while Chinese state media CCTV did not mention any of North Korean issues but focused on economic cooperation and opposed its politicization implicitly criticizing the US.

The summit turned out to be a confirmation of each leader's differences, experts say.

According to the readout released by the Korean presidential office, President Yoon pointed out that North Korea is continuing its provocations with unprecedented frequency and escalating nuclear and missile threats, and expressed hope that China, as a permanent member of the United Nations Security Council and a neighboring country, will “play a more active and constructive role.”

Xi responded that South Korea and China have a common interest in the issue of the Korean Peninsula and should protect the peace, and hopes that South Korea will actively improve inter-Korean relations. He added North Korea's intention is the key to South Korea’s audacious initiative and that if North Korea responds, China will “actively support and cooperate” to ensure the plan is well implemented.

“South Korea wanted China to respond more aggressively to North Korea's provocations, but China avoided giving a direct answer and suggested engaging in dialogue with the North,” said James Kim, a senior research fellow and director of the Center for Regional Studies at the Asan Institute for Policy Studies.

“China appears to want South Korea to talk with North Korea first instead of doing joint exercises with the US and Japan or implementing sanctions,” he said.

There are multiple reasons China does not want to be involved in North Korean issues, said Hong Min, a senior researcher at the Korea Institute for National Unification’s North Korean research division.

“First, China wants to keep North Korea as a bargaining card for negotiating with the US in the future,” he said.

From China’s point of view, if they cooperate with the US “too early,” there is not much to gain. “So they decided to wait patiently to use it at a decisive moment,” he said.

Another reason is “North Korea appears to be not subordinate to China and will do a nuclear test regardless of what China says” Hong said. “North Korea is going its own way.”

US President Joe Biden also said, “It’s difficult to say I am certain whether China can control North Korea,” when asked by a reporter about to what extent China has the ability to talk North Korea out of conducting nuclear tests after talking bilaterally with Xi on Monday in Indonesia.

According to the readouts released by CCTV, what China wants from Korea was clear and there were no North Korean issues. Most of the statements centered around economic cooperation and implicitly expressed concerns about South Korea’s close ties with the US that aim to exclude China in the economic sector.

Xi told Yoon the two countries should “keep the global industrial and supply chains secure,” stable and unclogged, and “oppose politicizing economic cooperation” or “overstretching the concept of security on such cooperation,” CCTV said.

Korea is participating in various US-led initiatives that exclude China. They include the Indo-Pacific Economic Framework for Prosperity, Chip 4 and recently the nation’s Indo-Pacific strategy that is aligned with the US strategy.

“China showed no interest in North Korean issues during the summits in Indonesia,” Hong said. What they focused on was showing the US-led supply reshuffle plans “hamper” international trade order, especially in their utmost important supply chain sector.

The Korean presidential office did not include the supply issue in its readouts because it was so contradictory to the actions that Korea and the US are taking, he added.

Looking forward, conflicts with China are inevitable as Korea gets closer to the US.

“In the end, we need to clarify our diplomatic position internally and continue to persuade China accordingly,” James Kim said.

“As far as security is concerned, we must emphasize the alliance with the US,” said Kang Joon-young, professor of the Graduate School of International Studies at Hankuk University of Foreign Studies. “However, we also showed that we try not to lean toward any side through the Korean version of the Indo-Pacific strategy. It's most important to show that we stick to those principles.”

At the Korea-ASEAN summit, President Yoon Suk-yeol announced he would implement the Indo-Pacific strategy using engagement, trust and inclusiveness as the three principles of cooperation. The “inclusive” principle seems to contain a regional order orientation that does not exclude China.

The National Security Office said on Wednesday that there is still “enough diplomatic space” with China.

When asked by a reporter whether the Korean government’s diplomacy is too one-sided with the US, a high-ranking official from the NSO said on the condition of anonymity, “It is difficult to agree.”

He added that, basically, the government is conducting diplomacy to “expand the breadth and depth of cooperation,” promoting Korea-China relations and relations with other countries, centering on the Korea-US alliance."