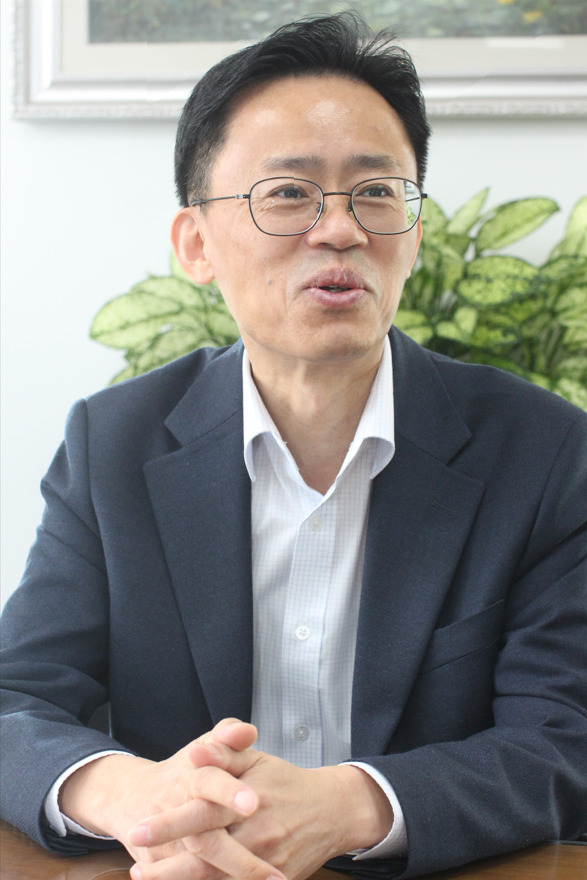 Choi Jong-kyun, deputy minister for population policy at the Ministry of Health and Welfare

The Ministry of Health and Welfare coordinates overall welfare policy throughout the entire life cycle of pregnancy, childbirth, childhood and so on, until one's twilight years. President Yoon Suk-yeol named Cho Kyoo-hong as the first vice minister to the head of ministry. Cho has already attended and completed a parliamentary inspection of his agency, and now he promises a fresh start for the ministry.

In an interview with The Korea Herald, Choi Jong-kyun, deputy minister for population policy, said that the low birthrate and aging population are the biggest pending issues for the Health Ministry, but these are Choi’s areas of expertise.

South Korea’s total birthrate has continued to fall, with a rate below the threshold of 1.3 children per woman for an “ultralow birth rate society," at 0.81 child per woman in 2021. South Korea is projected to become a superaged society in 2025, meaning over 20 percent of the population is aged 65 years and older. Choi added that he bears heavy responsibility to implement population policy.

The Health Ministry is developing a new population strategy that entirely changes the low fertility and aging society paradigm that has persisted since 2006. The appointment of the eighth civilian committee member for the presidential committee on ageing society and population policy is underway, and a new committee is about to take over.

Low fertility is caused by social and economic determinants as well as cultural factors that make it difficult to achieve results in a short time. The ministry has spared no effort to tackle the problem through the implementation of various policies. For childbirth and child rearing, the Health and Welfare Ministry provides maternity leave for work-family balance, child care services for infants and cash grants.

Having started in 2013, the government provides free child care for all families with children age up to 5 regardless of household income level. A total of 31,000 day care centers are operated by the government throughout the country, and about 1.2 million children attend the centers.

To improve the quality of child care, the government is working on supporting teachers, expanding part-time child care and improving the teacher-child ratio.

Various cash voucher programs such as a first-meeting voucher and child care allowance are implemented. The parental allowance that guarantees earnings losses associated with birth and child rearing will be introduced in 2023. The first-meeting voucher is a cash bonus of 2 million won to help with parental expenses such as layette and postnatal care facilities, and is provided only once. The child benefit system pays 100,000 won per month and now extends its beneficiary group from aged under 7 to up to 8 years old. Some 2.7 million children receive the benefit.

To provide a safe growth environment for a child in need of protection, the ministry is making proactive efforts to change the protection system from the current large-scale child care facilities to foster homes for adoption as well as temporary family foster care.

Starting from next year, parents with a child aged less than 11 months will be eligible for a parental allowance of 700,000 won per month, which will be 1 million won from 2024. We are currently working on increasing the capacity of public day care centers operated by central and municipal governments up to 50 percent by 2025 to ensure easy accessibility.

We are going to improve the quality of child care services through the improvement of the teacher-child ratio. To this end, we need to improve working conditions by hiring more teachers, including substitute teachers, and upping wages. With relevant ministries, we are preparing a phased integrated plan for qualified child care service.

It is the right time to prepare for the resilience of seniors, with the number of older persons projected to reach 10 million in 2025. The project for senior social activity support is designed to mitigate elderly poverty, improve health status and resolve loneliness.

We set a plan to expand public job opportunities for older people who have no public pension.

The landscape of our workforce is changing as we are living longer. It is imperative to diversify job opportunities available to older people.

We are trying to make connections with the private and social services sector with the intent to awaken a desire to work for seniors who possess extensive wealth of experience.

Strengthening public jobs is also a pending issue where the work involves performing the same simple operations, such as improvement of the street environment. To increase the contribution that older workers can make to society, we must create opportunities for age-friendly policies to strengthen their adaptability and resilience.

A lot of achievements have been made under the government’s efforts to prevent and treat dementia. But the number of elderly dementia cases has rapidly increased to reach 890,000 in 2021. So far, 256 dementia care centers and 204 branches have been established across the nation to provide services including medical checkups, dementia prevention and case management at the early stage. Long-term care services have been expanded with a reform of the health insurance system to reduce medical expenses for dementia patients and their families. For patients with severe dementia, medical expenses dropped from 60 percent to 10 percent, and health insurance now covers dementia examinations.

At the same time, the government designated 641 dementia villages and has trained 1.25 million dementia care partners to build a dementia-friendly environment. For interagency response, a new task force has been organized in a dementia support center as a base organization for dementia management in local communities.

The government will expand infrastructure to treat patients with dementia and protect vulnerable groups. Choi pledges that he and the Ministry of Health and Welfare will fulfill remaining tasks under the national responsibility for dementia patients and their family members to the fullest.