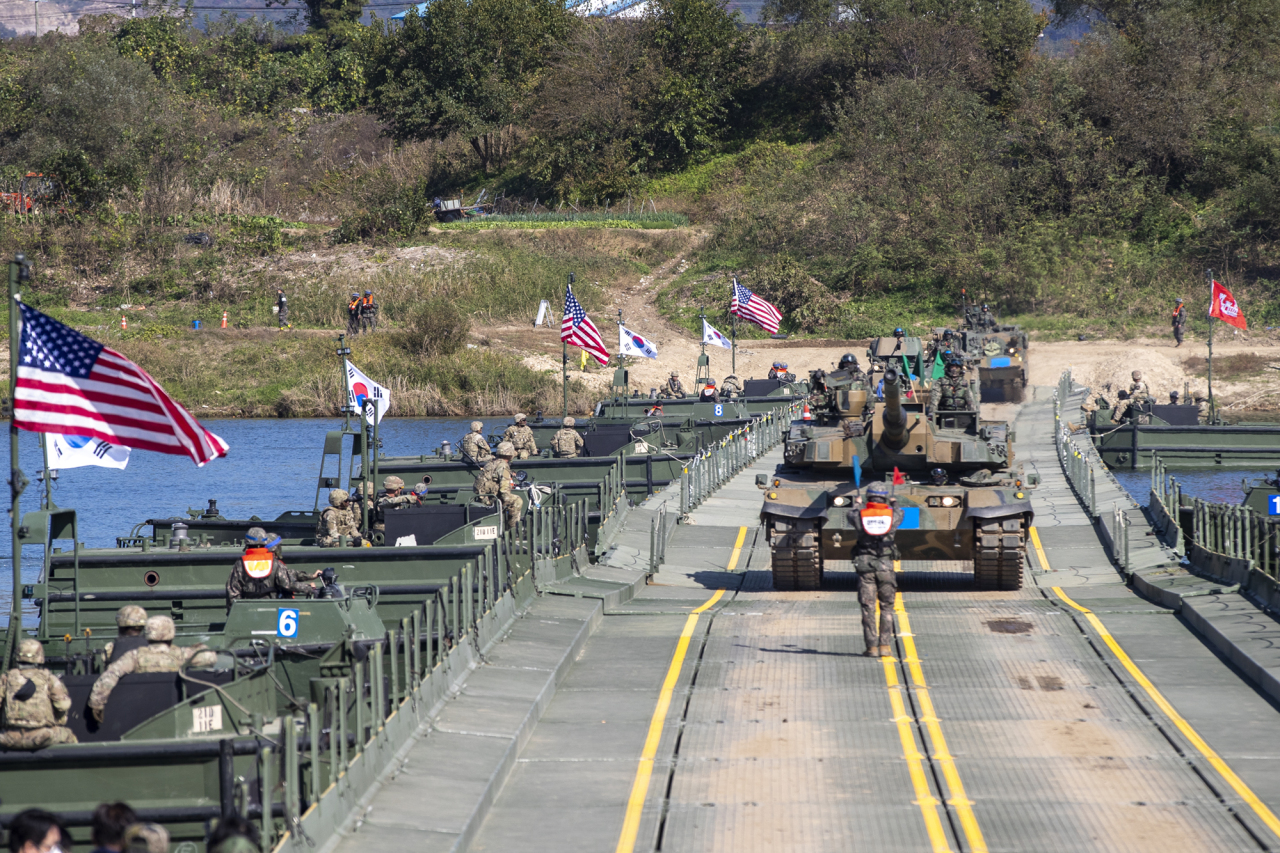 South Korean and US engineering soldiers conduct a joint river-crossing drill via a pontoon bridge over the Namhan River in Yeoju, 65 kilometers southeast of Seoul, on Oct. 19, 2022. (Republic of Korea Army)
WASHINGTON -- The US and South Korea should seek to optimize their combined defense posture and create room for diplomacy with North Korea, according to Frank Jannuzi, president of the Maureen and Mike Mansfield Foundation and formerly US President Joe Biden’s longtime foreign policy aide in the Senate.

Recalibrating strategy to enhance the alliance’s readiness is imperative to achieve the ultimate objective of maintaining peace on the Korean Peninsula.

“There’s some truth to the idea that sometimes diplomacy only happens at the edge of crisis. It’s very unfortunate,” Jannuzi said in a one-hour interview with The Korea Herald on Nov. 2 at the office of the Mansfield Foundation -- which promotes understanding and cooperation between the US and Asian countries -- in Washington.

“We may be at a similar point now, where tensions are very high. It may be an opportunity for the US and the ROK to signal to North Korea the desire to engage and see whether North Korea itself may view the situation differently,” he added, referring to South Korea’s formal name, Republic of Korea.

Jannuzi said the US and South Korea should rack their brains to figure out how to de-escalate tensions and break the cycle of North Korean provocations given that the Korean Peninsula may once again enter a state of crisis diplomacy.

“It’s really important to view the US-ROK military exercises through the right lens,” said Jannuzi, who advised Biden and current US climate envoy John Kerry on East Asian affairs when they led the US Senate Foreign Relations Committee.

“We have the goal of deterrence and showing our readiness. But we also have a political objective, which is to try to convince North Korea to engage with us to promote peace and stability on the peninsula. So we need to keep that political objective in mind also.”

But the Korean Peninsula also has been locked in a vicious cycle of provocations and deterrence.

South Korea and the US upheld their commitment to suspend large-scale combined military exercises to support diplomacy with North Korea after the first US-North Korea summit in June 2018 in Singapore.

But North Korea was unresponsive to overtures from the allies while accelerating its military buildup and continuing nuclear saber-rattling. South Korea and the US brought back large-scale major military exercises in August this year.

The Kim Jong-un regime has taken a series of escalatory steps in response to the allies’ move to enhance readiness and deterrence vis-a-vis North Korea. North Korea has justified a barrage of missile launches and its firing of more than 1,000 artillery shells as tit-for-tat military actions against defense-oriented South Korea-US military exercises.

“But I still believe that the stronger party has the freedom and has the power to exercise restraint,” Jannuzi said.

“So I would hope that when this current round of US-ROK joint military exercises is concluded, the US and the ROK would sit down together and figure out what kind of defense posture they think is best both to ensure deterrence against North Korea and to create space for diplomacy.”

Broader objectives than denuclearization
Jannuzi underscored that the US and South Korea should set the objective of accomplishing the complete denuclearization of North Korea as a part of a broader strategy to establish peace and stability on the Korean Peninsula.

In this sense, Washington and Seoul should set a much broader goal than solely denuclearizing North Korea.

The US and South Korea cannot convince North Korea to abandon its nuclear weapons without addressing North Korea’s security needs, ending the Korean War and “forging a more comprehensive peace.”

“Denuclearization by itself cannot be accomplished. But denuclearization might be possible in the future in the context of an overall peace. I think that that’s what we should strive for.” 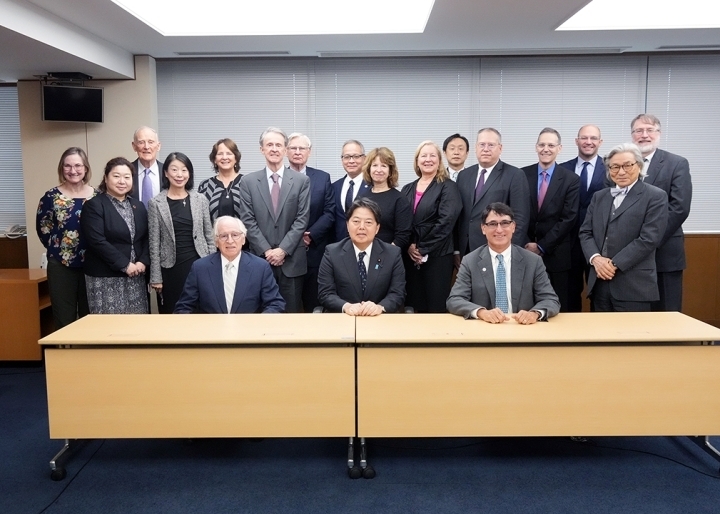 Japanese Foreign Minister Yoshimasa Hayashi meets the Mansfield Foundation Board of Directors including Frank Jannuzi (far right of the first row) on October 25 in Tokyo. (Ministry of Foreign Affairs of Japan)
Don’t give upon China
Apart from North Korea’s stubborn adherence to nuclear weapons, geopolitical dynamics in Northeast Asia have created unfavorable conditions for the US and South Korea to jump-start talks with North Korea.

“We have a new Cold War atmosphere that is growing between the United States and China. And, for sure, that has emboldened North Korea because they believe that they can do anything they want right now, including a nuclear test,” Jannuzi said. “North Korea will not be punished for that.”

The reemerging alignment among China, Russia and North Korea has created an environment conducive for North Korea to launch missiles and conduct nuclear tests with impunity.

For instance, the UN Security Council has been unable to take any actions against more than 60 ballistic missile launches, including seven intercontinental ballistic missiles, this year in the absence of support from China and Russia. The two are permanent veto-wielding members.

Jannuzi said that the “only way for the US to reverse that trend line is to have direct diplomacy with China.” The Biden administration should take on a serious approach to bring China into a “more cooperative posture” on North Korea issues, despite challenges including simmering tensions over Taiwan that have complicated US engagement with China.

“What diplomats are supposed to do is turn something impossible into something difficult. So, right now, it may seem impossible to engage China to try to get them to help us to restrain North Korea. But I don’t think it’s impossible. I think it’s just very difficult, and we should try it.”

Trilateral cooperation as a shield, not a sword
The US diplomatic engagement with China is also imperative to make trilateral security cooperation among the US, South Korea and Japan a more effective and efficient mechanism to maintain peace and stability in Northeast Asia.

“The reality is that any defense of the Korean Peninsula against North Korean aggression must include US bases in Japan. This is a military fact of life. To be credible, our defense posture on the Korean Peninsula requires US-Japan-ROK trilateral cooperation. So I think that’s an inescapable fact of geography,” Jannuzi said.

“(But) that trilateral arrangement must not be deployed with a Cold War mindset that it is against any one country.”

Trilateral cooperation should not set in motion a regional division, epitomized during the era of Cold War as an epiphenomenon of geopolitical competition between the US and the Soviet Union.

US diplomacy with China is “so vital” to avoid driving China away or China and North Korea together.

“The US-ROK-Japan triangle can be an instrument of peace and stability in Northeast Asia, but only if it is wielded as a shield and not as a sword. So I think that shield does not have to threaten China,” Jannuzi said.

“And I think the US should engage in high-level diplomacy with China in concert with our allies to find more common ground that the US-ROK-Japan triangle is the most effective way to ensure peace and stability in the Northeast Asian region that does not have NATO and that does not have effective regional security mechanisms.”

Jannuzi said that the US and China had “many common interests,” including maintaining peace and stability on the Korean Peninsula and in Northeast Asia.

Put a stop to nuclearized Northeast Asia
Jannuzi underscored the urgency of jump-starting negotiations to open the window of opportunity to pursue denuclearization of the Korean Peninsula in light of the implications of North Korea’s nuclear buildup for security in Northeast Asia.

The reality of living with a nuclear-armed North Korea has affected the credibility of US extended deterrence in the region and affected the psychology of the commitment of South Korea, Japan and Taiwan to non-nuclear status.

It is uncertain whether South Korea, Japan and Taiwan will remain non-nuclear if existential threats posed by North Korean nuclear weapons persist for 20 years, 30 years or 50 years from now.

“It’s a bit of a gamble. As long as there’s a North Korean nuclear program, we will be running the risk that South Korea, Japan and Taiwan might lose confidence in US (extended) nuclear deterrence.”

North Korea’s expected seventh nuclear test, of course, would pose “one more blow to peace and stability in the region.”

And a seventh test would bring us one step more toward a future where South Korea, Japan, Taiwan and others might raise questions about the credibility of US extended deterrence and deterrence capabilities and weigh up the need of acquiring nuclear weapons.

“So my main concern about a seventh test is that it’s just one more step that might, in a small way, raise those doubts in Seoul or Tokyo,” Jannuzi said.

“However, I’m not very worried about a seventh test because again we’ve been living with a nuclear-armed North Korea for 16 years. It’s not the first test, it is not the second test. It’s the seventh, and why haven't they tested yet? To me, the answer is very simple. They’re not ready.”

The Korea Herald conducted a series of interviews with former senior US officials and experts in Washington from Oct. 31 to Nov. 2 on the occasion of the 54th South Korea-US Security Consultative Meeting. The interviews cover a wide range of pending issues, including the prospects for a denuclearized peninsula, the alliance’s deterrent posture against North Korean and regional threats as well as South Korea’s strategic role in the Indo-Pacific region. -- Ed.