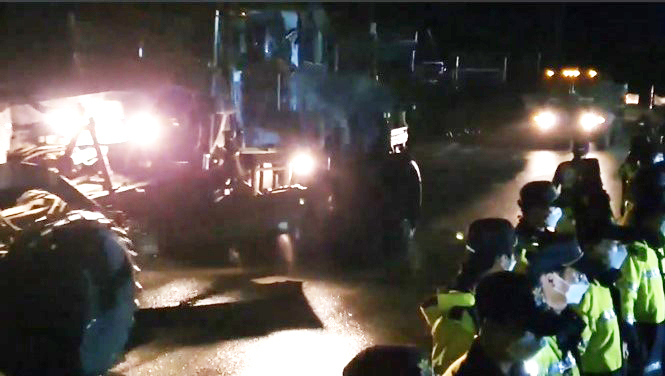 Construction equipment is delivered to a THAAD base in Seongju, 220 kilometers south of Seoul, in this photo taken on Sept, 4, 2022, and provided by a civic group opposing the installation of the US anti-missile defense system. (Yonhap)

South Korea's defense ministry has selected a successful bidder in its project to acquire and install electromagnetic wave detectors around the THAAD missile defense base in a southeastern county, officials said Sunday.

The ministry is to receive the delivery of eight electromagnetic wave detectors by April 28, 2023, under a promise made to residents in Seongju, 217 kilometers southeast of Seoul, home to an advanced US missile defense system called Terminal High Altitude Area Defense.

Five of those will be installed near the base to monitor the potentially hazardous electromagnetic waves of THAAD's X-band radar around the clock, with the remainder to be set aside as spares.

The equipment is expected to be installed in the second quarter of next year, according to an official, who added that the ministry is in talks with local organizations on the exact locations.

The THAAD system was installed there in 2017 to help cope with North Korea's evolving missile threats. Local residents and some activists have fiercely protested the allies' move, raising concerns about risks to human health and the environment.

The planned installation of the monitoring devices comes on the heels of an environmental impact assessment on the THAAD base. (Yonhap)