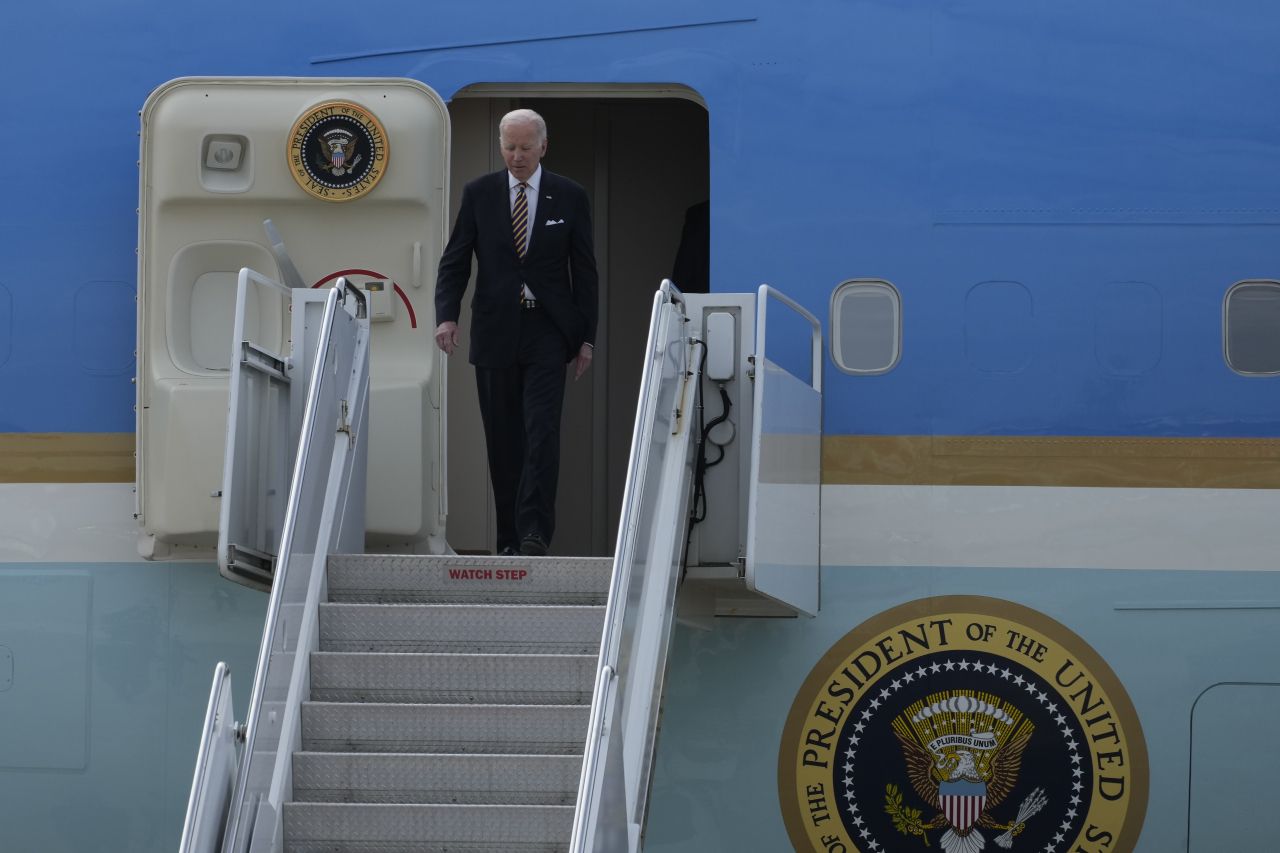 US President Joe Biden arrives on Air Force One for the Association of Southeast Asian Nations summit in Phnom Penh, Cambodia, Saturday (AP-Yonhap)

PHNOM PENH, Cambodia -- President Joe Biden is formally kicking off his participation at a conference of southeast Asian nations on Saturday, looking to emphasize the United States' commitment in the region where a looming China is also working to expand its influence.

Biden's efforts at the Association of Southeast Asian Nations summit are meant to lay the groundwork ahead of his highly anticipated meeting with Chinese President Xi Jinping _ the first face-to-face encounter of Biden's presidency with a leader whose nation the US now considers its most potent economic and military rival.

The two leaders will meet on Monday at the Group of 20 summit that brings together leaders from the world's largest economies, which is held this year in Indonesia on the island of Bali.

Traveling to Phnom Penh earlier Saturday, national security adviser Jake Sullivan said Biden will raise issues such as freedom of navigation and illegal and unregulated fishing by China with the ASEAN leaders _ aimed at demonstrating US assertiveness against Beijing.

Freedom of navigation refers to a dispute involving the South China Sea _ where the United States says it can sail and fly wherever international law allows and China believes such missions are destabilizing. Sullivan said the U.S. has a key role to play as a stabilizing force in the region and in prevention of any one nation from engaging in "sustained intimidation and coercion that would be fundamentally adverse to the nations of ASEAN and other countries."

"There's a real demand signal for that,'' Sullivan told reporters aboard Air Force One on Saturday. Referring to the People's Republic of China, Sullivan continued: "I think the PRC may not love that fact, but they certainly acknowledge it and understand it.''

Biden's visit to Cambodia -- the second ever by a US president -- continues his administration's push to demonstrate its investments in the south Pacific, which was highlighted earlier this year when the White House hosted an ASEAN summit in Washington, the first of its kind. He also tapped one of his senior aides, Yohannes Abraham, as the official envoy to the 10-country bloc that makes up ASEAN, another way the White House has highlighted that commitment.

ASEAN this year is elevating the US to a "comprehensive strategic partnership" status -- a largely symbolic enhancement of their relationship but one that puts Washington on the same level as China, which was granted the distinction last year.

Biden will begin his day in Phnom Penh by meeting with Hun Sen, the prime minister of Cambodia, the host for the regional summit. He'll then speak at the annual US-ASEAN summit and participate in the traditional family photo with southeast Asian leaders, and attend a gala dinner hosted by a parallel summit in Cambodia focusing on east Asia.

Another topic Biden will raise is Myanmar, where the military junta overthrew the ruling government in February 2021 and arrested its democratically elected leader, Aung San Suu Kyi. While in Phnom Penh, the president will discuss with other leaders how they can "coordinate more closely to continue to impose costs and raise pressure" on the military, Sullivan said, as it continues to repress people of Myanmar, which had steadily headed toward a democratic form of governance before the coup.

Biden will participate in East Asia summit meetings on Sunday, including a gathering with the leaders of South Korea and Japan, before leaving for the Group of 20 summit in Bali. (AP)