A song often becomes the background music to a particular part of our life, and replaying it reminds us of that moment. The piece of life we experience with the song becomes edged into the musical notes, making the song itself a log of the moment.

Singer Jung Eun-ji's new album "log" is a small collection of such pieces from her life and the five songs that had once played endlessly in the background. According to Jung, she is dropping the remake package to keep a promise to her fans.

The album was originally slated for release on Nov. 2 but the date was postponed following the Itaewon crisis that took many lives. Jung conducted a joint interview with the local press a few days ahead of the initial release date.

"I made the promise as a joke at first, but my fans started to ask me if I'm really going to release it and that in return made me think about actually making the album," Jung Eun-ji said during the interview.

The start was "Around Thirty," late singer Kim Gwang-seok's 1994 song, which Jung said she had promised to her fans that she'd drop a remake of when she turned 30. The song is listed as the final track of the album.

"I'd felt that there was so much time left until I turn 30. It was a time when I'd been listening to 'Around Thirty' everyday, and I think I said it hoping that I'll be able to release my own album around that age, because back then, I wasn't really in a position to do so."

She'd felt afraid that she was still too immature to voice the emotional depth carried by the original song properly before she recorded "Around Thirty," but going into singing, she realized she wasn't as young as she'd thought.

"I could relate to the lyrics more than I'd expected, and it hit me that I've really dashed away with my life until now, working hard and meeting many people. And it made me feel sad. I think this album in particular made me sad," Jung said.

Jung's new album consists of five songs that many Koreans -- especially those in their thirties and beyond -- may be familiar with. Fronting the album is "Journey for Myself," a much-loved song dropped in 2005 by Buzz, a rock-ballad band that was a household name in Korea in the mid to late 2000s.

"This one I literally poured in all the money I had when I was young -- singing in the coin karaoke. I didn't sing it just once but on and on. Buzz was one of the few artists whose cassette tapes I'd bought," Jung said.

Jung said "Journey for Myself" had been the background song for her imagination as the young Eun-ji sat in her room, with her head in a pillow.

"It felt sad when I sang the song as a grown up. I used to like the fact that 'The Little Prince' appeared in the lyrics, and I like the upbeat melody. But now, I've come to understand that the lyrics, 'I'll make a better memory than love' implies that the singer has overcome a heartbreaking love and put behind a hurtful memory to say that."

The second track of the album, "Blue Whale" by rock band YB, embodies the message that she hopes to carry as a singer throughout her career, said Jung.

"I was consoled by the song. I would play this song over and over again during my rough days. I would pore over the details and break down the lyrics inside my head, and every time I listen to this song, I'm reminded that this is the direction I wish to take," Jung said.

For the song's arrangement, she said she tried to retain the song's originality as much as possible because the song itself carries Jung's memories, the rough yet unforgettable moments that have been overcome with the song. 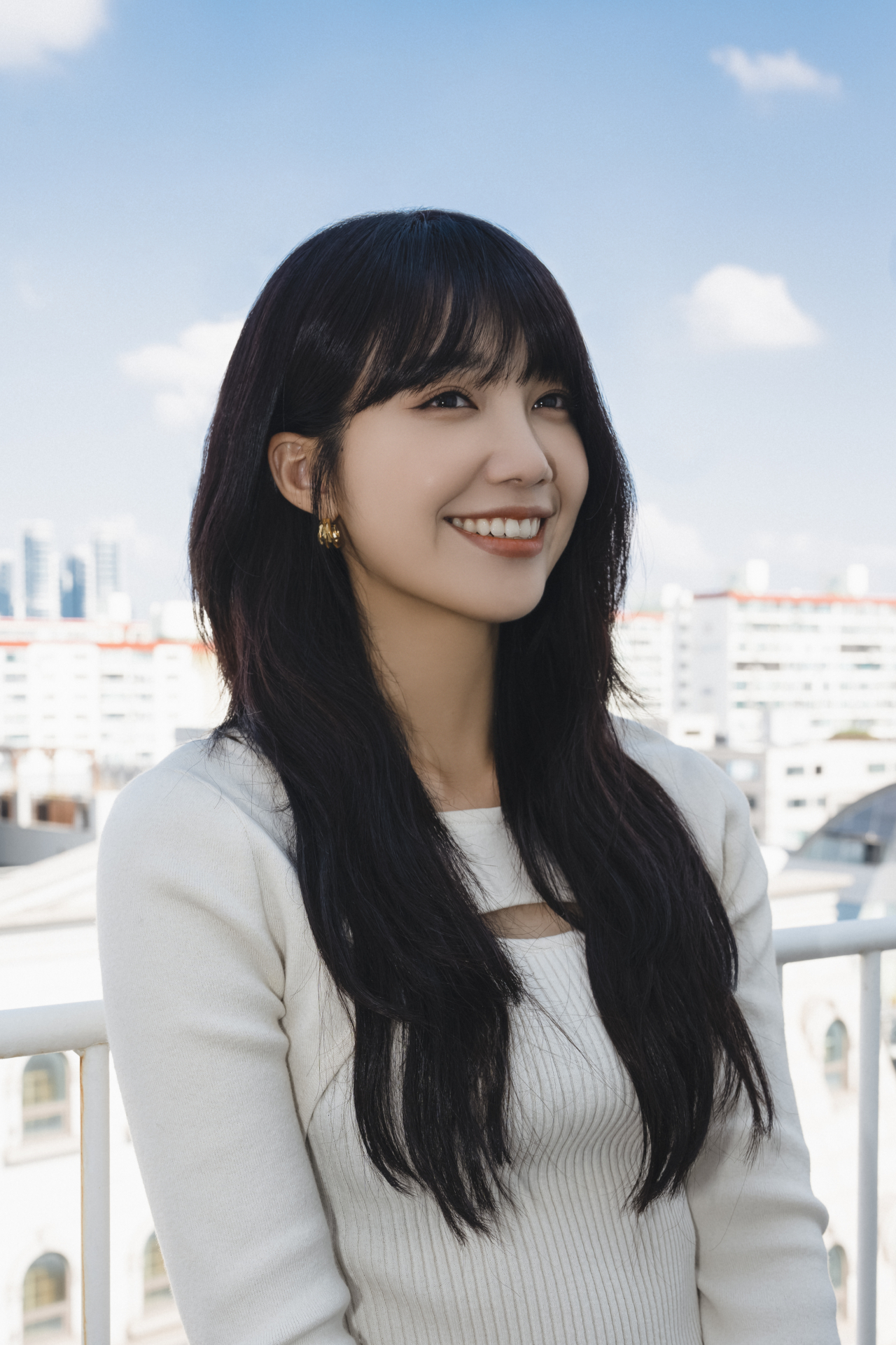 Jung debuted as a musician in 2011 as a member of K-pop idol group Apink. The group were hugely popular at the time, and Jung, with her explosive vocal prowess as a singer and prominence on TV variety shows, quickly made a name for herself in the entertainment scene. She also debuted as an actor in 2012 with tvN's megahit drama series "Reply 1997," and has steadily expanded her acting career since.

Stardom at such a young age also had its dark side, as Jung had to continue working and overcome challenges without being able to give a second thought about what she actually wanted and what was best for her.

"Everything was too fast for me. I'm innately a slow person and tend to be very cautious when I act. But this industry demanded that I move at a much faster pace. People would ask questions and expect an instant answer. I felt washed away by those questions, just trying to catch up with what was given. Maybe it's because I'm slow, but looking back, I felt like nothing lasted."

Caught between her dream and reality, Jung said she felt a kind of emptiness, which, the singer finds is well-reflected in the album's third track, veteran rock-balladeer Cho Yong-pil's megahit song "Dream" (1993).

"I saw myself in the lyrics, striving so hard to work for my dream only to be sitting in the dark room all alone," the 30-year-old singer said.

Born and raised in the seaside city of Busan, Jung came to Seoul in 2011, just before auditioning for Apink and beginning her career.

"Coming to Seoul was a big challenge that I just cannot leave out when talking about myself. I've now lived in Seoul as long as I've lived in Busan, but there's still the nostalgia. I used to listen to songs, like 'Dream,' that sang about living away from home a lot when I'd first come to Seoul," she said.

And it was this story Jung had with the song that made her want to include it on the album. According to Jung, she had to wait a long time to get Cho's permission to record the song.

"Cho's company told us that he'd thought over the issue from many aspects for a long time. I was told that he even asked whether I'd moved (to Seoul) from somewhere else and whether I was living away from home, and I think he took into consideration such stories I had. I thought I won't be able to include 'Dream' on my album until the last moment. I'm truly grateful (to Cho)."

"I learned it at my piano academy and I was practicing it at home on my melodica. My mom came up to me, smiling so brightly, and asked me how I knew the song. Listening to this song recently, the emotions and the air of that day just came rushing in and I could remember the moment so clearly," she said, adding, "I hope my songs could make someone feel like this as well."

Jung said the five songs remind her of herself. They may have captured her biggest sorrows, but also the moments when she matured the most inside. Now, she hoped she could heal listeners with her own voice.

"If we could call our life a journey, these songs are the playlist of my journey until this point, so I hope people can enjoy following my journey and also be healed by them as I'd been," she said about "log."