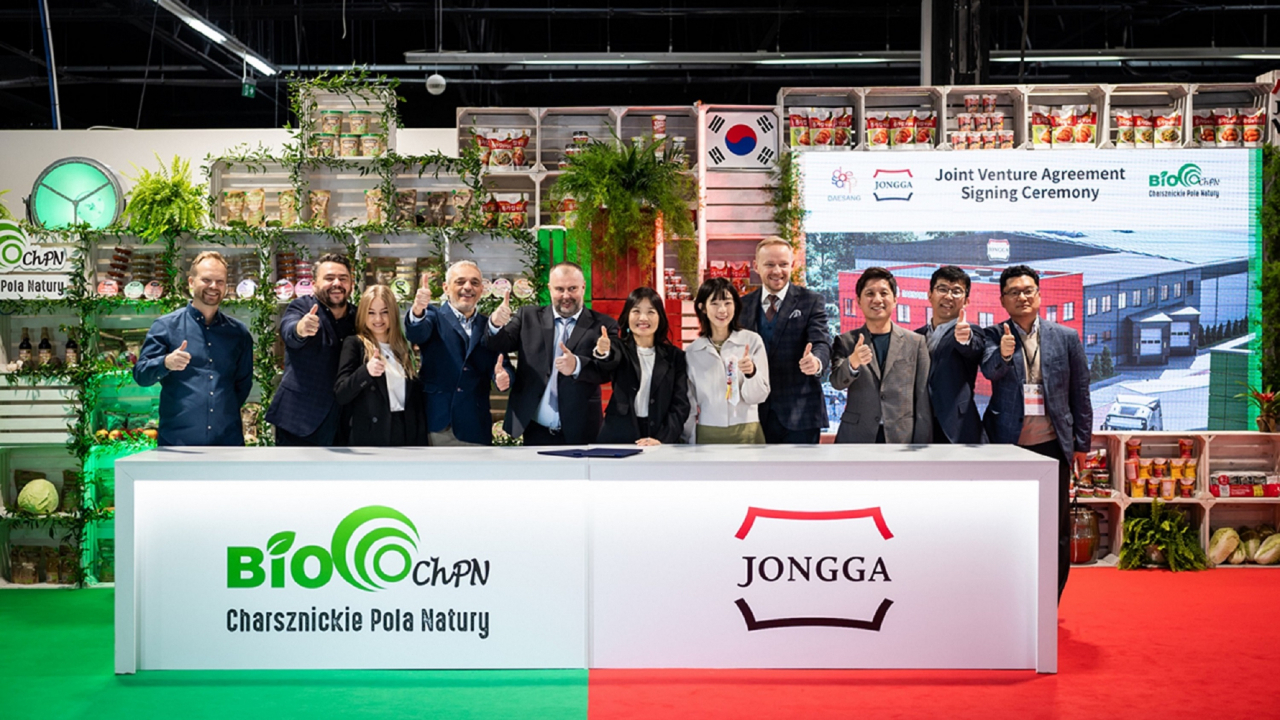 Officials of Daesang, ChPN, and Łukasz Głębiński, president of ChPN (fifth from left) pose for photo during a signing ceremony for joint venture 'Daesang ChPN Europe' on Oct.7. (Daesang)

Named "Daesang ChPN Europe," the joint venture will be 76 percent owned by Daesang and 24 percent owned by Charsznickie Pola Natury (ChPN), a Polish food product distributor. The new entity will be launched in January, next year.

With this joint effort, Daesang said its popular kimchi brand Jongga will be able to enter the Polish market, taking advantage of ChPN's production facilities and extensive distribution networks.

Moreover, the joint venture will be aiming to construct Daesang's first kimchi factory in Krakow, Poland.

The planned 6,613-square-meter factory is scheduled to be completed by the second half of 2024. Some 15 billion won ($10.6 million) is slated to be invested for the construction of the plant.

The plant, once completed, will be Daesang's third overseas kimchi production factory, producing 3,000 tons of kimchi annually by 2030. It will also be the company's 11th production facility of any kind outside the Asian region.

With the establishment of the joint venture, Daesang said its goal is to raise sales of local food businesses in Europe to 100 billion won per year by 2025.

Exports to Europe increased annually by an average of more than 20 percent from 2017 to 2022, with the Netherlands and the UK being the top two kimchi importers in the region in September.

"The establishment of a Polish joint venture is meaningful in that it is yet another adventure for our attempts to globalize kimchi," said Lim Jung-bae, CEO of Daesang.

"We will do our best to promote the excellence and legitimacy of kimchi in Europe, following our efforts in the US."

The South Korean food giant currently dominates the kimchi export market, with its exports taking up 60 percent of the domestic export sales of kimchi, as of first half of this year.