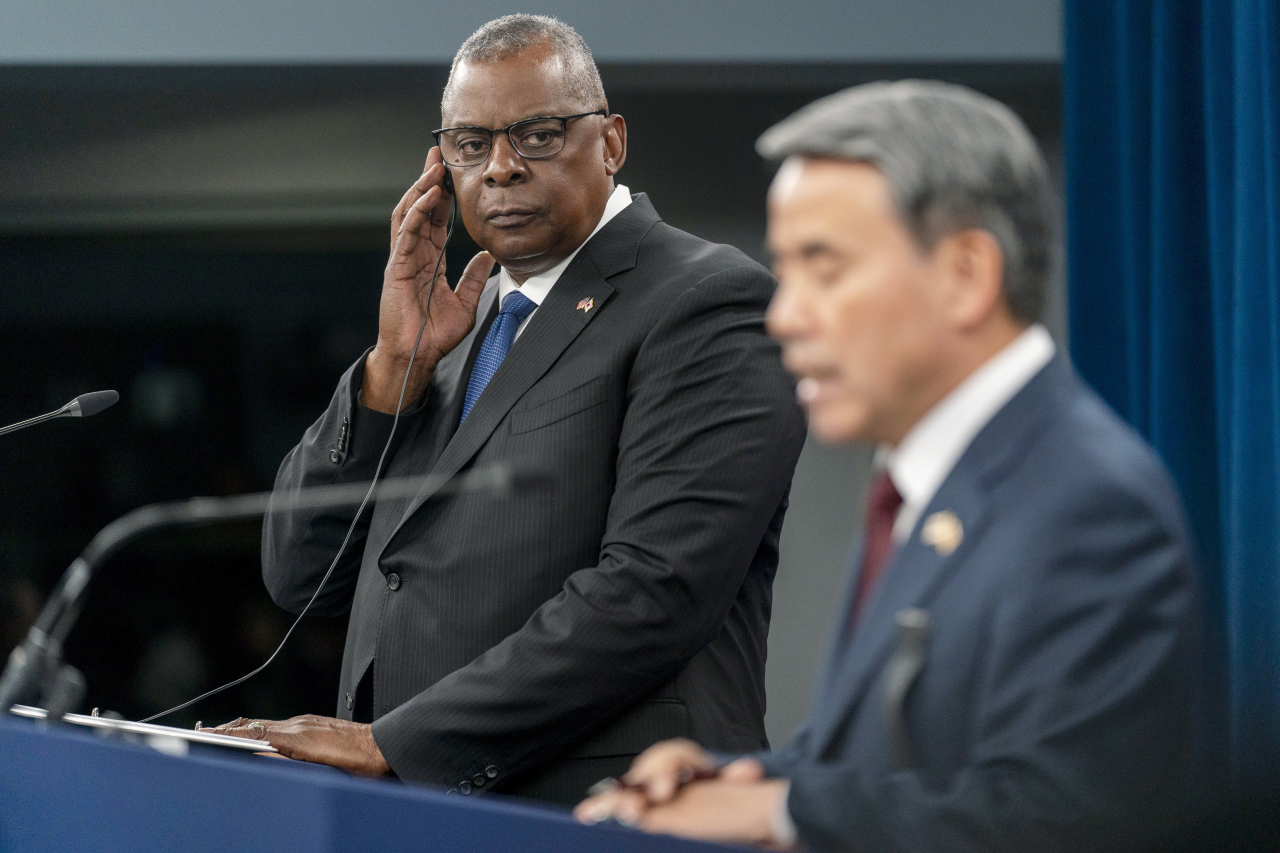 Secretary of Defense Lloyd Austin listens as South Korea`s Minister of National Defense Lee Jong-sup, right, speaks in a joint news conference at the Pentagon, Thursday,Nov. 3, 2022, in Washington. (AP Photo/Andrew Harnik)
WASHINGTON -- South Korea and the United States on Thursday fleshed out their plans to enhance the viability of US extended deterrence against escalating North Korean threats after months of discussion. The US also publicly sent a strong warning against North Korea’s nuclear saber-rattling at the annual bilateral security talks.

South Korean Defense Minister Lee Jong-sup and US Defense Secretary Lloyd Austin reached an agreement at the 54th Security Consultative Meeting on Thursday at the Pentagon, outside Washington.

The annual security talks came at a critical juncture when North Korea has continued saber-rattling and provocation despite the allies’ efforts to strengthen deterrence against North Korea.

North Korea fired a total of 31 missiles, including one intercontinental ballistic missile, in just two days on Wednesday and Thursday. One ballistic missile crossed over the Northern Limit Line, which is the de facto inter-Korean maritime border, with the projectile landing south of the border for the first time since the division of the Korean Peninsula.

The US notably and unprecedentedly sent a direct and strong warning against North Korea’s potential use of nuclear weapons in the joint statement issued following the annual defense-ministerial bilateral talks.

“(Austin) noted that any nuclear attack against the United States or its Allies and partners, including the use of non-strategic nuclear weapons, is unacceptable and will result in the end of the Kim regime,” according to the joint statement.

The statement largely echoed the US Nuclear Posture Review released in late October. But Lee said the statement showed the “strong determination of South Korea and the US” in his meeting with reporters at the Korean Cultural Center in Washington on Thursday afternoon.

The Biden administration warned the Kim Jong-un regime of the “dire consequences” of using nuclear weapons in the Nuclear Posture Review, elucidating that there is “no scenario in which the Kim regime could employ nuclear weapons and survive.”

“They pledged to further strengthen the Alliance’s capabilities, information sharing, and consultation process, as well as joint planning and execution, to deter and respond to DPRK’s advancing nuclear and missile threats,” the joint statement read, referring to an abbreviated form of North Korea's formal name.

The newly established mechanism would allow South Korea to play a bigger role and increase engagement in the multistage process to strengthen the US extended deterrence, Lee told South Korean reporters during the separate briefing.

The four-stage mechanism consists of information sharing and consultation on North Korean threats and strategy planning and execution.

At the annual security dialogue, Seoul and Washington agreed to take specific actions to enhance the viability of US extended deterrence based on the four-stage framework.

Lee and Austin, for instance, “reaffirmed the commitment of the US to deploy United States strategic assets to the Korean Peninsula in a timely and coordinated manner as necessary, to enhance such measures, and identify new steps to reinforce deterrence in the face of the DPRK’s destabilizing activities.”

One example of joint execution in the four-stage mechanism is to deploy US strategic assets to the Korean Peninsula based on a strategy jointly devised by the US and South Korea.

Speaking at the briefing, Lee said South Korea and the US will step up coordination to “deploy US strategic assets on the Korean Peninsula at a level equivalent to permanent deployment.”

South Korea and the US also agreed to revise their Tailored Deterrence Strategy by the end of this year to facilitate joint planning on the alliance’s deterrence, according to Lee.

The TDS -- which was first signed in 2013 -- needs to be amended in light of the rapidly evolving nature of North Korea’s missile and nuclear capabilities.

The TDS is a strategic guideline on the alliance’s deterrence and response to better prepare for North Korea’s advancing nuclear and missile threats.

The DSC TTX allows South Korea and the US to practice joint military responses in simulated contingency scenarios, including North Korean nuclear threats and the use of nuclear weapons. The two countries staged the DSC TTX only twice in the last five years.

South Korea and the US underscored the importance of conducting the TTX on a yearly basis “in response to recent changes in DPRK nuclear strategy and capabilities.”

Lee and Austin also “concurred on the need to enhance combined exercises and training events to strengthen readiness against DPRK nuclear and missile threats, particularly given the security environment following the DPRK's most recent missile tests,” according to the joint statement.

Both sides also committed to “closely cooperate to return to large-scale field exercises in line with combined exercises in 2023, noting that training for defensive and deterrent purposes is a critical component of maintaining Alliance readiness.” 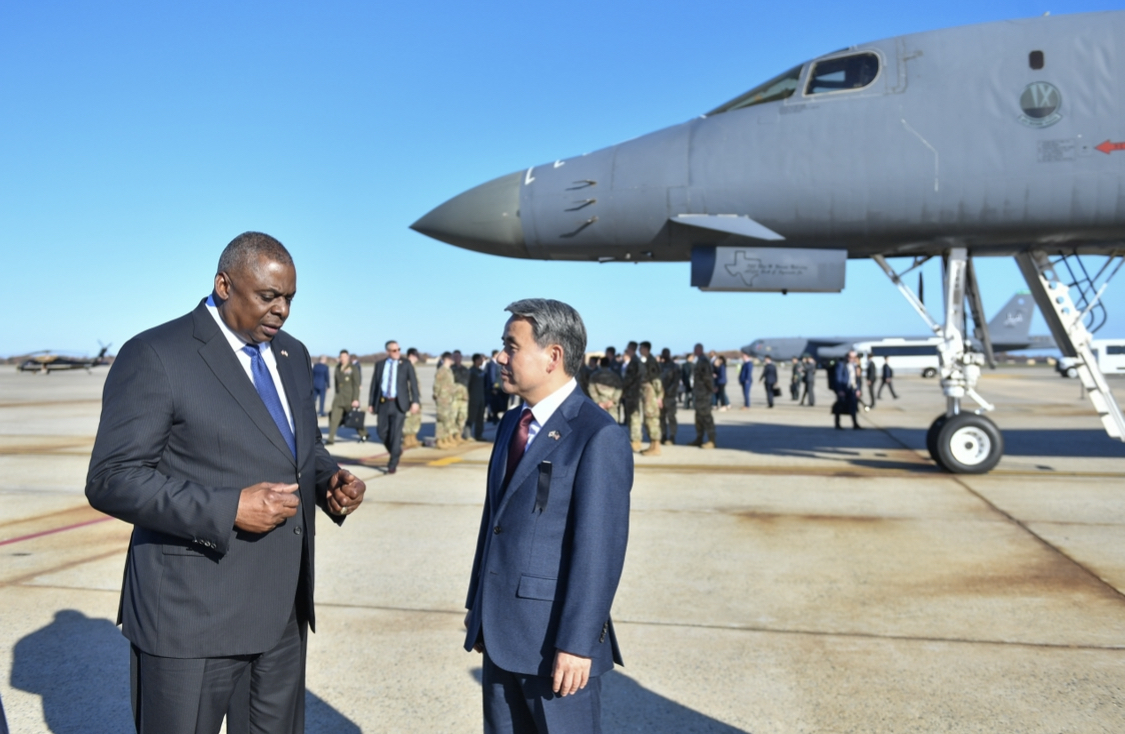 South Korean Defense Minister Lee Jong-sup (R) and his U.S. counterpart, Lloyd Austin. talk during a visit to Joint Base Andrews in Prince George`s County, Maryland, on Nov. 3, 2022. (Ministry of National Defense)
Lee, Austin tour US bombers
After the meeting, Lee and Austin visited the Korean War Veterans Memorial in Washington and laid a wreath to pay respects for the sacrifice and dedication of Korean War veterans.

Then, Austin and Lee headed to Joint Base Andrews outside Washington for a briefing and tour of a nuclear-capable B-52 Stratofortress bomber and a B-1B Lancer bomber.

Lee is the first foreign defense minister to have visited Joint Base Andrews with Austin to tour US bombers, the US Defense Department confirmed to The Korea Herald. Austin notably proposed the visit to the US Air Force base.

The visit by Austin and Lee to Joint Base Andrews shows the alliance’s will to “coordinate to strengthen all US and ROK military capabilities to implement US extended deterrence to effectively and appropriately respond to DPRK nuclear and missile threat,” the US Defense Department said in a press statement.

The US Defense Department explained that “US military aircraft and other airpower assets are a vital component of extended deterrence and the US commitment to a free and open Indo-Pacific.”

Lee said the joint visit to the air base aimed to “send a strong warning to North Korea as well as enhance the public confidence in the US extended deterrence,” according to South Korea’s Defense Ministry.

“It is unprecedented that the defense chiefs of the two countries toured US strategic bombers together at Andrews Air Force Base,” said a South Korean military source, who wished to remain anonymous. “The visit shows in action that the US extended deterrence will work at any time when South Korea is threatened, and it is a stern warning to North Korea which has been making provocations habitually.”

However, Austin said the US deterrence has been “effective,” despite North Korea’s continuing provocations, echoing the joint statement that the focus of the alliance’s deterrence is to deter North Korea from using nuclear weapons.

“North Koreans have engaged in activity such as … testing an intercontinental ballistic missile, a number of short-range ballistic missiles, firing artillery into the ocean. And so all of this activity is potentially destabilizing,” Austin said at a joint news conference at the Pentagon.

“I think it's possible that they could continue to do that kind of thing, but certainly, we are focused on making sure that they don't choose to employ a nuclear weapon or choose to attack South Korea.”

Austin reiterated that North Korea is deterred from attacking South Korea and from employing a nuclear device, either against the peninsula or against the homeland.

Austin elucidated that staging South Korea-US combined military exercises is a key component of the US deterrence capabilities, adding that the US has been focused on increasing its readiness.

“One of the things that sends a strong deterrent message is our ability to work together and to be interoperable, and our ability to train our troops to a high level of capability, and also maintain a combat-credible force in the region,” Austin said.

“We are focused on making sure that nobody attacks South Korea, and we're committed to that. Our commitment is ironclad. And we’re also committed to deterring anyone from using a nuclear device. And yes, I do believe we've been effective in that.”