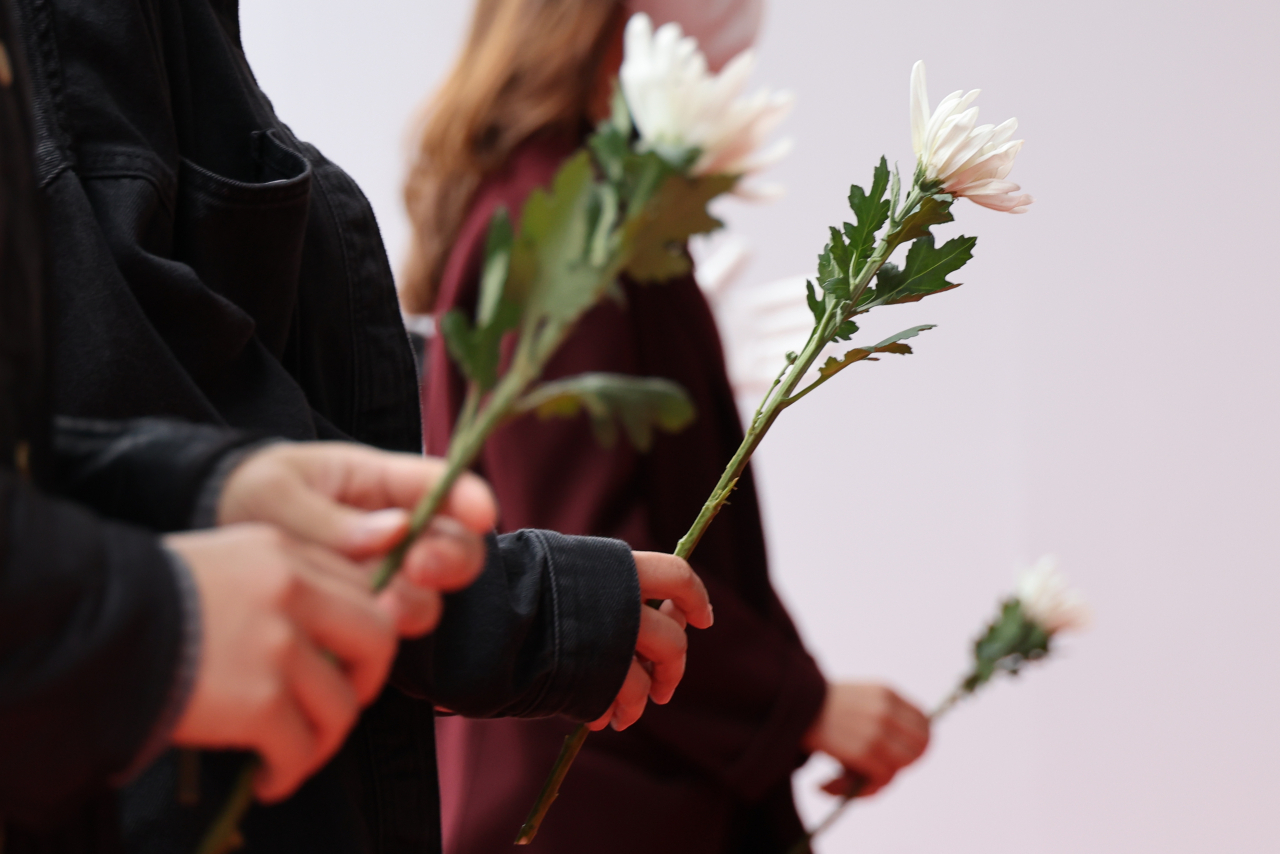 People place flowers at a memorial altar in front of City Hall in Seoul on Thursday. (Yonhap)

Expat communities in South Korea are rallying behind grieving families of foreign victims of the Itaewon tragedy for whom bringing their loved one home is another ordeal fraught with administrative, financial and language barriers.

As of Thursday, only four of the 26 foreign nationals who died in the Oct. 29 crowd crush in Itaewon had been repatriated. Three more are expected to return home Friday, according to the Ministry of Foreign Affairs.

South Korea has pledged to treat all 156 victims equally and said Wednesday that it will provide 35 million won ($24,600) of financial support to the families of the deceased. Provision of the aid should take no longer than three working days, the ministry stressed, but a Yongsan District Office official told The Korea Herald that they aim to expedite the process to just one day.

Over the past few days, while Seoul officials were sorting out the support plan, several crowdfunding efforts for foreign victims have taken place online and offline, led by friends, religious groups, school communities and many others.

These efforts include donations for Madina Sherniyazova from Kazakhstan, Mukhammadrauf Naziraliev from Uzbekistan and Yuliana Pak and Kristina Garder, both of Russia.

Two of the four projects, for Sherniyazova and Pak, reached the target amount as early as Wednesday. One of them raised more than 10 million won within a day, according to the victims’ friends who shared updates online about the donation efforts.

Immediate financial help was needed for victims’ families to bring their loved one home, a person involved in the fundraising project explained to The Korea Herald.

"Funding of the Korean government for body transportation was not given immediately, and still has not been given," the person said Thursday afternoon.

Not all donations were open for the public. For example, a Sri Lankan Muslim community in Seoul has raised over 9 million won for the bereaved family of compatriot Munawwar Mohamed Jinath. The religious community did not solicit outside donations.

The money was spent to pay hospital bills and cover the costs for sending Jinath's body home, according to a friend of Jinath who wished to remain anonymous.

"We were not sure when the government support would be offered, so we came together with those in a mosque in Seoul to collect money to bring (Jinath’s) body back home," he said.

Some of the bereaved families could not afford to settle the victims' end-of-life hospitalization here and pay for their transportation via flight or vessel, multiple people told The Korea Herald, in addition to costs for cremation, a funeral and interment.

The cost of repatriating a deceased body is much more than the typical cost of a passenger flight, ranging from $10,000 to $20,000 depending on the distance, according to International Citizens Insurance.

In the case of Russia, due to its ongoing invasion of Ukraine, there are no direct flights between Russia and Korea. The bodies of the Russian victims should be repatriated via sea vessels.

"(Bereaved families) deserve to have their child home as fast as possible and to send them off as best they can,” a person familiar with one of the crowdfunding projects for the Russian victims said on condition of anonymity. “To have these families be on an equal level with the Korean families they do require a little more. Hence the private funding."

Under Russian customs, a funeral takes places three days after one’s death and the bereaved family commemorates nine days and 40 days after the death.

"The parents must be stressed too, not being able to follow the social and cultural norm," the person said.

Meanwhile, there are also calls for attention and support for those who were severely injured in the deadly disaster.

“(The injured person’s) family traveled from (the home country) to Korea with their own money and have not been given any financial assistance from either government organization," said a person close to one foreign patient in critical condition. "Nobody is helping them.”

Amid a flurry of grassroots campaigns, however, some people voice caution over potential fraud and mishandling of donations.

An expat in Seoul called for a verified fund where people can donate to, warning scammers could try to take advantage of the situation, and the funds could be distributed to those who need them in a fair and transparent manner.

"Some of the foreign victims may not have any resources in Korea to be able to ask for donations," noted an expat living in Seoul, who declined to be named. "The donations are not being shared equally."

A source from the banking industry in Korea told The Korea Herald that donors should take heed, as Korean banks are not authorized to check the authenticity of the bank account holder unless requested by law enforcement, adding it is important for donors to ensure who the recipient is when wiring money.

According to Yongsan-gu Office, financial aid from Seoul will be wired to a bank account designated by the respective embassy, or identified as being held by a bereaved family member. But they first need to apply with required documentation. The deadline for applications is Nov. 11. Two claims for reimbursement have been received as of Thursday morning, the official added.