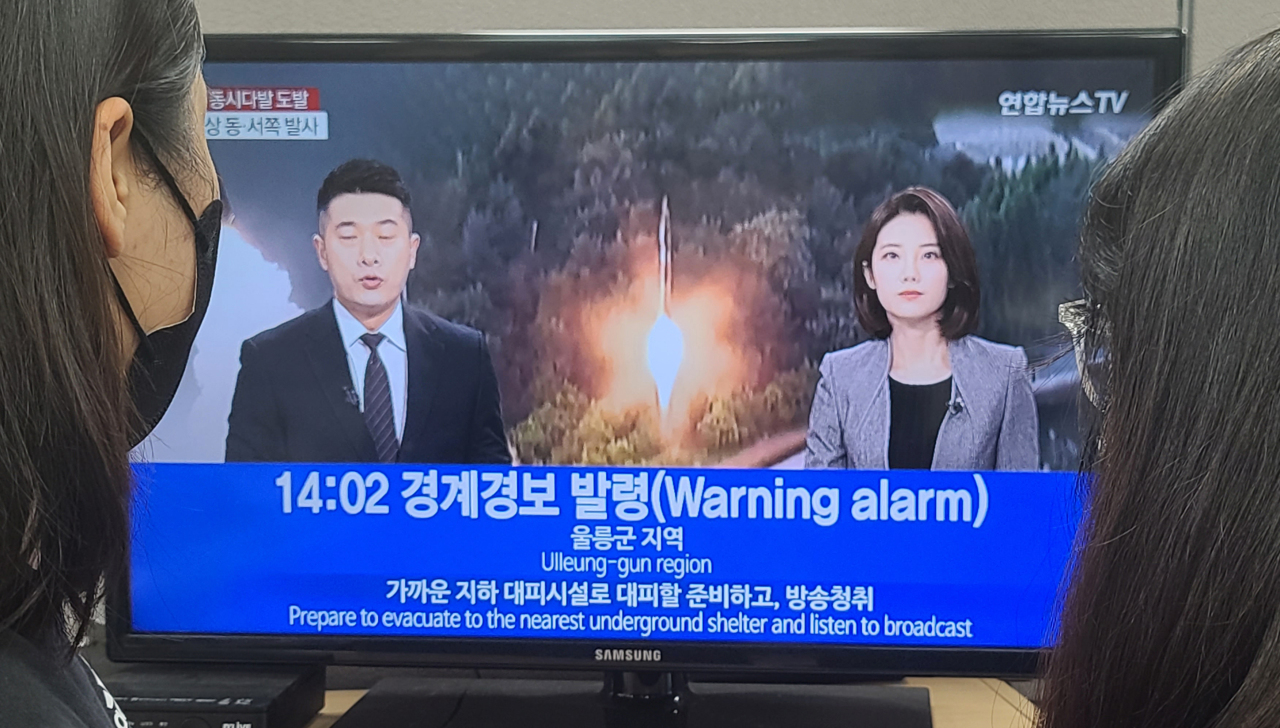 People watch the news on the lifting of an air raid alarm as of 2 p.m. at an office in Seoul on Wednesday. The alarm was issued on South Korea's eastern Ulleung Island at 8:55 a.m., right after North Korea fired about 10 missiles, including three short-range ballistic missiles (SRBMs) launched into the East Sea. One of the SRBMs fell into high seas 26 kilometers south of the inter-Korean maritime border, the Northern Limit Line (NLL), marking the first missile launched by the North that flew past the NLL since the end of the 1950-53 Korean War. (Yonhap)

The spokesperson also said the U.S. will continue to work with South Korea and other allies to limit North Korea from further advancing its weapons programs.

"The United States condemns the DPRK's ballistic missile launches and its reckless decision to fire a missile below the de facto maritime boundary with the Republic of Korea," the spokesperson told Yonhap News Agency, referring to North Korea by its official name, the Democratic People's Republic of Korea.

The North fired three short-range ballistic missiles on Wednesday (Seoul time) in its latest provocation that followed nine earlier rounds of missile launches in roughly one month since late September.

One of the three missiles landed in waters below the Northern Limit Line, marking the first time since the end of 1950-53 Korean War that a North Korean missile crossed the de facto maritime border between the divided Koreas.

Pyongyang fired nearly 20 more missiles into the East and Yellow seas, along with some 100 artillery shots on the day, according to the South Korean military.

"These launches are in violation of multiple United Nations Security Council Resolutions unanimously adopted by the council and threaten peace and stability in the region," the department spokesperson said.

The spokesperson reaffirmed U.S. commitment to engage with the North, but said the U.S. will also work to prevent North Korea from further advancing its weapons programs.

"We continue to seek serious and sustained dialogue with the DPRK, but the DPRK refuses to engage," the spokesperson said.

"Our commitment to the defense of the Republic of Korea and Japan remains ironclad and we will continue to work closely with our allies and partners to limit the North's ability to advance its unlawful weapons programs and threaten regional stability," the official added. (Yonhap)