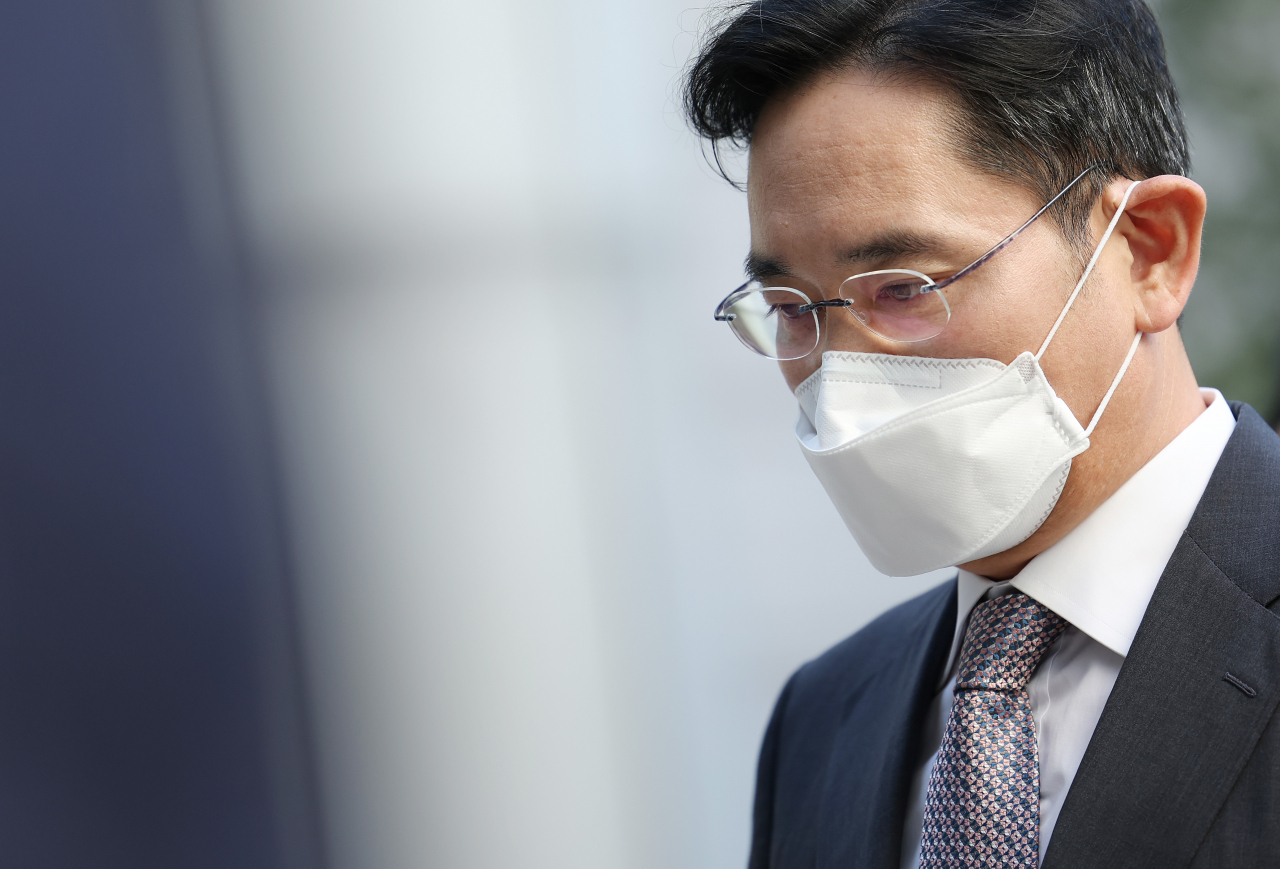 Lee Jae-yong’s formal ascension to the top seat at Samsung Electronics, the crown jewel of the nation’s largest conglomerate, is fueling speculation about potential changes in the founding family’s governance structure across Samsung companies.

His promotion to chairman has long been considered a crucial step for Lee to wield more power at Samsung. With the new title, Lee’s vision for a “New Samsung” will take a clearer shape, while stalled talks on mega deals are expected to gain fresh momentum. Not to mention giving a big morale boost to employees after years of a perceived “leadership void.”

In order to push ahead with his new ambitious plans, during which proxy battles with hostile shareholders seem unavoidable, Lee is seen facing the task of tightening his grip on power with his tiny 1.6 percent stake in Samsung Electronics.

Lee and his family wield influence over Samsung companies through their sizeable stakes worth 31.31 percent in Samsung C&T, a construction arm and the de facto holding unit of the group. Lee alone owns a 17.97 percent stake in the company, being the largest shareholder.

Samsung C&T owns a 19.34 percent stake in Samsung life Insurance, which is the largest shareholder of Samsung Electronics with an 8.51 percent stake.

Despite his minority stake in Samsung Electronics, Lee exerts power through Samsung Life Insurance, an issue that becomes a frequent target for public scrutiny.

Adding to the vulnerability is a pending revision to the Insurance Business Act that aims to restrict insurance companies from holding too much stakes in their sister firms.

Currently, the allowable limit is 3 percent of its total asset. But the revision seeks to apply the rule based on the market price of the stakes, not the buying price.

Because Samsung Life Insurance acquired stakes in Samsung companies decades ago, its stake ownership has been free from the so-called “3 percent rule.” But based on the market prices that have surged in recent years, it seems unavoidable for it to sell off considerable stakes worth some 30 trillion won, which is directly linked to Lee’s control over Samsung Electronics.

For years, Samsung’s top brass has been looking into ways to change the governance structure and boost Lee’s influence. Boston Consulting Group has reportedly offered consultations on the organizational restructuring of the three key affiliates but details have not been unveiled. 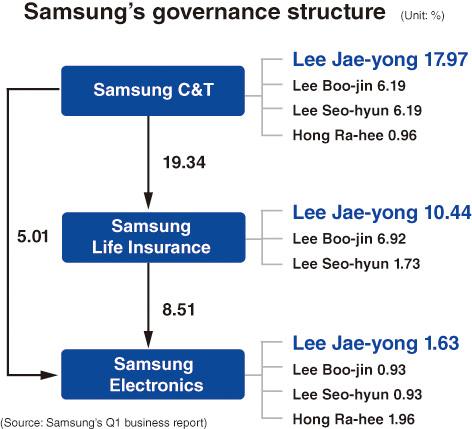 Several scenarios, including setting up a holding unit or splitting Samsung Electronics into investment and business companies, are being reviewed but all of them are costly and time-consuming process that would be subject to strict scrutiny as well, according to Choi Nam-gon, an analyst at Yuanta Securities.

“Investors are well aware that Lee’s promotion to chairman is part of plans to boost the founding family’s influence at Samsung,” he said. “The optimal choice for now seems to be maintaining the current structure (under which Samsung C&T plays a de facto holding unit role) while seeking outside support to create a more favorable board of directors.”

For some time, he predicted, Samsung Electronics would focus on strengthening shareholder benefits and elevating its market value through large-scale merger and acquisition deals. The tech giant’s market value is estimated at 355 trillion won as of Wednesday.

“Samsung is in no hurry,” said an industry source who wished to be unnamed. “It remains to be seen whether the insurance law revision gets approval at the National Assembly. Even approved, a seven-year grace period will be granted.”

“Rather than seeking drastic changes in its governance structure, Samsung is expected to bolster ESG (environmental, social and governance) efforts to secure favorable votes among shareholders.”

Since launching an independent compliance-monitoring committee in 2020, it has hired a batch of governance specialists, including Daniel Oh who worked for Institutional Shareholder Services and BlackRock, and Chung In-hee, former sustainability expert advisor at LG Chem.

In September, the company announced its joining of the RE100 renewable energy initiative.

Samsung is scheduled to hold a shareholders meeting in March next year, during which Lee's board membership is likely to top the agenda.