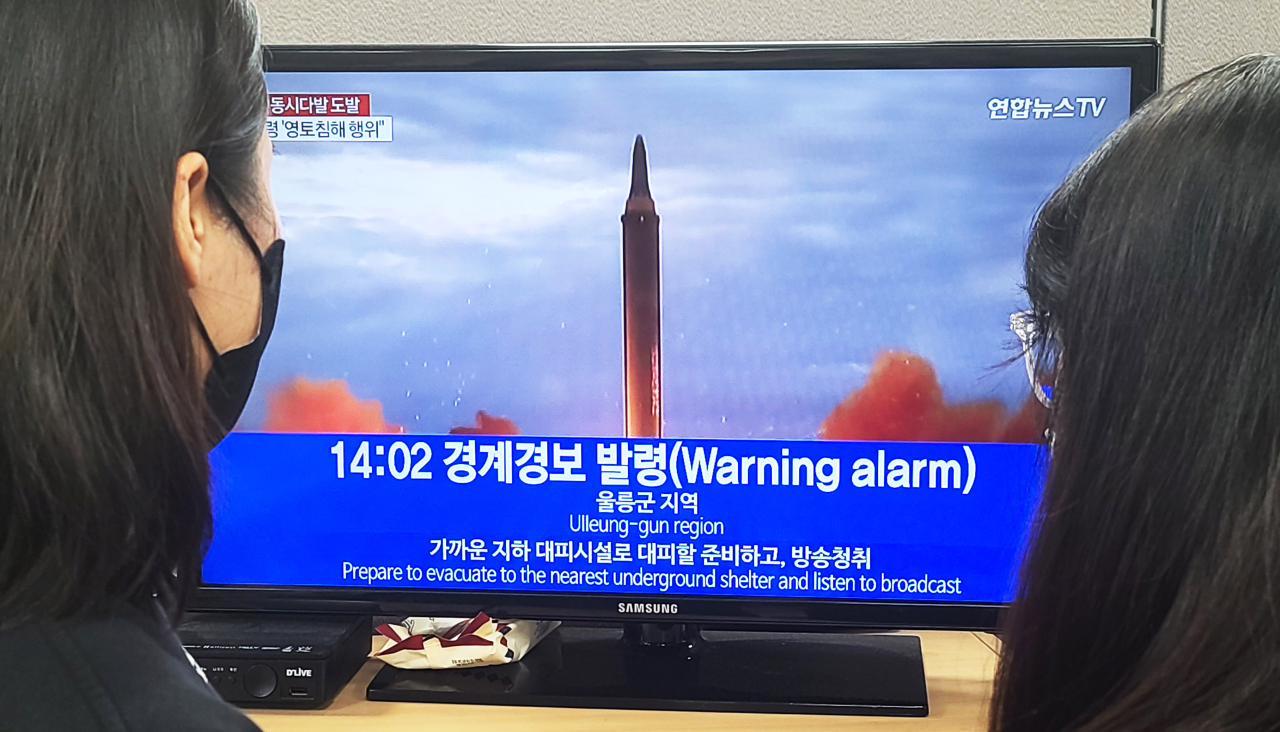 People watch the news on the lifting of an air raid alarm as of 2 p.m. at an office in Seoul on Nov. 2, 2022. The alarm was issued on South Korea`s eastern Ulleung Island at 8:55 a.m., right after North Korea fired about 10 missiles, including three short-range ballistic missiles (SRBMs) launched into the East Sea. One of the SRBMs fell into high seas 26 kilometers south of the inter-Korean maritime border, the Northern Limit Line (NLL), marking the first missile launched by the North that flew past the NLL since the end of the 1950-53 Korean War. (Yonhap)
North Korea fired 25 missiles and around 100 artillery shells over the course of about 11 hours on Wednesday, the South Korean military said.

But one North Korean ballistic missile unprecedentedly flew over the de facto inter-Korean maritime border and landed in waters south of the border for the first time since the division of the Korean Peninsula.

In response, the South Korean military fired three missiles from fighter jets toward the north of the inter-Korean maritime boundary to demonstrate its precision-strike capabilities, denouncing the missile launch as a “direct and very serious provocation.”

North Korea unprecedentedly fired at least 17 missiles, including short-range ballistic missiles and surface-to-air missiles, from the eastern and western areas on Wednesday morning, according to the Joint Chiefs of Staff.

But military sources said that 19 missiles were fired from nine different places in the morning.

North Korea fired four short-range ballistic missiles toward the West Sea from the city of Chongju and Pihyon County in North Pyongan Province at 6:51 a.m.

North Korea fired three short-range ballistic missiles from the eastern coastal city of Wonsan in Kangwon Province toward the East Sea at 8:51 a.m. Among them, only one ballistic missile was fired toward South Korean territory.

North Korea fired an additional 10 projectiles, presumed to have been ballistic and surface-to-air missiles, from 9:12 a.m. The missiles were fired from the city of Sinpo, Ragwon County, Jongpyong-eup in South Hamgyong Province toward the East Sea and from Onchon County and Hwajin-ri in South Pyongan Province as well as Kwail County in South Hwanghae Province toward the West Sea.

According to the JCS, six projectiles including surface-to-air missiles were fired from four locations into the East and the West seas between 4:30 p.m. and 5:10 p.m.

In addition, North Korea fired around 100 artillery shells from Kosong County, Kangwon Province, at 1:27 p.m. toward the East Sea.

The artillery shots fell inside inter-Korean maritime buffer zones, but north of the Northern Limit Line. The two Koreas agreed to cease all live-fire and maritime maneuver exercises in the buffer zones in a military tension reduction deal signed during the inter-Korean summit on Sept. 19, 2018.

South Korea’s JCS said the firing of artillery into the maritime buffer zones was a “flagrant violation of the Sept. 19 military agreement.”

Unprecedented cross-border missile launch
One short-range ballistic missile was fired toward the South Korean island of Ulleungdo in the East Sea on Wednesday morning, which prompted the South Korean government to immediately issue an air raid alert at 8:54 a.m. for residents to take shelter. It was the first air raid warning issued since another launch in February 2016. The "all clear" was sounded at 2 p.m.

The missile landed in international waters 57 kilometers east of Sokcho, Gangwon Province, and 26 kilometers south of the NLL, which is the de facto but disputed inter-Korean boundary, according to South Korea’s Joint Chiefs of Staff.

It was the first North Korean missile to land south of the NLL since 1953, the JCS said, adding that such a missile firing is “extremely unusual.”

The JCS warned that the South Korean military “can never overlook such provocative acts by North Korea.”

“The military will respond sternly and decisively in close coordination with the US while strengthening monitoring and vigilance,” according to the JCS. The JCS said the cross-border missile launch is a “direct and very serious provocation that undermines peace and stability on the Korean Peninsula.”

North Korea launched a barrage of 19 missiles at a sensitive time.

South Korea and the US on Monday began conducting the five-day large-scale Vigilant Storm aerial combat exercise to enhance combat readiness and train for wartime contingencies, amid mounting threats from North Korea.

The South Korean and US defense chiefs will meet their annual security talks on Thursday in Washington and discuss how to enhance the alliance’s deterrence and readiness against escalating North Korean threats.

In addition, South Korea has been in a weeklong national mourning period for the victims of Saturday night’s crowd surge disaster in Itaewon, Seoul.

The participants of the NSC meeting said the “provocation that was carried out during the national period of mourning clearly depicts the anti-humanity and anti-humanitarian side of the North Korean regime" and deplored such behavior.

Yoon ordered that “stern countermeasures be taken swiftly to ensure North Korea pays a clear price for its provocation.”

The president also directed the military to “maintain a full military readiness to protect the lives and safety of the South Korean people and prepare for the possibility of North Korea conducting additional high-intensity provocations.”

The South Korean military fired three precision air-to-surface missiles, including at least one SLAM-ER precision-guided cruise missile, from F-15K and KF-16 fighter jets toward the East Sea. South Korea’s missiles landed in the high seas north of the NLL, according to the JCS.

“The military’s precision strike demonstrated its will to sternly respond to any North Korean provocations, including short-range ballistic missile launch, as well as its capabilities and readiness posture to launch precision strikes against the enemy,” the JCS said.

N. Korea puts words into action
Pak Jong-chon, who serves as vice chairman of the Central Military Commission of the Workers’ Party of Korea, said the US and South Korea should “stop frantic ‘military games’ and provocative remarks” in an English-language press statement issued Tuesday night.

The exercise, previously dubbed “Vigilant ACE” from 2015 to 2017, had been scaled down or deliberately conducted at a lower key in the wake of the first US-North Korea summit in June 2018. But the allies have decided to publicly conduct the aerial exercise for the first time since December 2017 in an apparent attempt to send a warning message to North Korea.

Pak also denounced the US Nuclear Posture Review released on Oct. 27. The Biden administration warned of toppling the Kim Jong-un regime should it launch nuclear attacks against the United States or its allies in the review.

The top North Korean military official underlined that “such military rashness and provocation can be no longer tolerated” in the English-language statement.

Pak warned that the North Korean military will immediately take countermeasures should the US or South Korea plan to use force against North Korea.

“It should be noted that in the present situation, it is a big mistake to accept this as a threat warning only.”