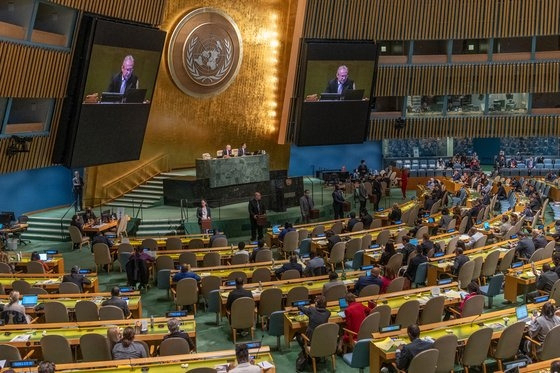 South Korea joined as a co-sponsor for a UN resolution on North Korea’s human rights abuses, the Foreign Ministry confirmed Tuesday, breaking a four-year hiatus to speak out against Pyongyang’s violations.

South Korea joined other countries as a co-sponsor of a EU-draft resolution addressing the human rights situations in the North, which was submitted to the United Nations’ Third Committee on Monday in the US, Seoul's Foreign Ministry spokesperson Lim Soo-suk confirmed in a regular press briefing.

"North Korea's human rights issue is a matter of common human rights, and we believe a consistent measure based on principle is necessary (to handle the issue)," Lim said.

"We are also actively participating in the discussion with the United Nations and international society to promote the human rights of North Koreans."

The EU-drafted resolution passed on to the UN council will be reviewed for adoption in or around December.

The UN resolution is not legally binding, but it has been adopted in the 47-member council for 17 consecutive years to condemn and put pressure on the North Korean regime for its human rights abuses.

Seoul had been a co-sponsor for the resolution for 11 years from 2008 to 2018, but the Moon Jae-in administration declined to join the sponsorship from 2019, citing inter-Korean peace efforts.

As the Moon administration then had been holding historic summits with North Korean leader Kim Jong-un, it had taken a passive attitude toward North Korea’s human rights abuses, apparently to avoid the ire of Kim, as the regime reacted sensitively against the criticism.

The current Yoon Suk-yeol administration that succeeded Moon has been stepping up its criticisms against the North on its human rights abuses, taking a hard-line stance in handling North Korean issues.

The Yoon administration, which was inaugurated in May, appointed international relations professor Lee Shin-wha as the ambassador-at-large on North Korean human rights issues in July, a post that had been vacant for the past five years under Moon.