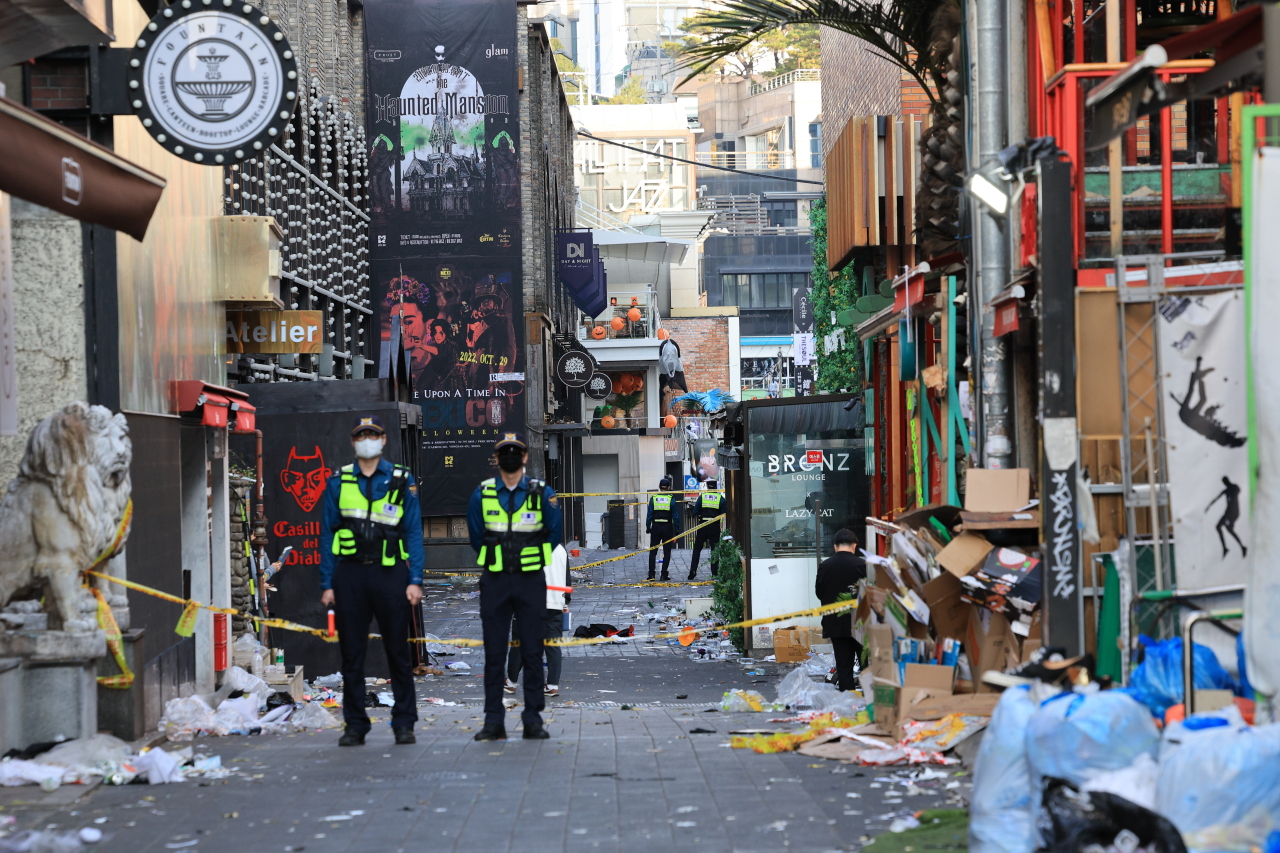 Police officers walk by an alley behind the Hamilton Hotel at Itaewon, central Seoul, on Sunday (Yonhap)
Retailers called off a series of Halloween-themed marketing events following an overnight crowd surge that killed at least 153 people, among some 100,000 who turned up for Halloween festivities in Itaewon, a popular nightlife district in central Seoul, late Saturday.

Many retail companies here had planned to use Halloween to promote their products catering to young consumers, but events have quickly been canceled following the government’s announcement of a national mourning period throughout the week.

The nation's top two retail giants, Shinsegae and Lotte said Sunday they made adjustments to their planned holiday campaigns out of respect for the victims in the Itaewon tragedy.

An official from E-mart, the group’s supermarket chain, said, “we have realized the gravity of the situation and decided to close the celebration zone at the Yongsan branch for the safety of consumers and staff members. We are also suspending promotions for Halloween items at our branches.”

Starbucks Korea, the nation's No. 1 specialty coffee chain that operates more than 1,600 stores nationwide and is also under the Shinsegae umbrella, ended its promotion of Halloween-themed drinks and baked goods on Sunday, three days earlier than originally scheduled.

“The stores are also tearing down celebration balloons and decor,” said an official from Starbucks Korea.

Lotte Property and Development, the shopping mall developer under retail giant Lotte Group, said it has canceled its Halloween event. Smaller Halloween replicas of a giant yellow rubber duck, a signature feature of the Lotte World Tower in Jamsil, southeastern Seoul, were to be put on display at photo zones during the Halloween holidays.

Retailers scrapping their Halloween promotional events comes as they have seen stronger sales of Halloween costumes and party supplies and decorations in recent years, with the holiday being celebrated by a wider range of consumers here.

E-mart said sales of Halloween items increased an annual average of 20 percent between 2018 and 2021, while its crosstown rival Lotte Mart said related sales have almost doubled over the past year.

In the meantime, the nation's top game companies, including NCsoft, Netmarble and Krafton, also canceled Halloween-themed promotional events that include specially designed costumes for game characters and giveaway events for in-game currency and items.