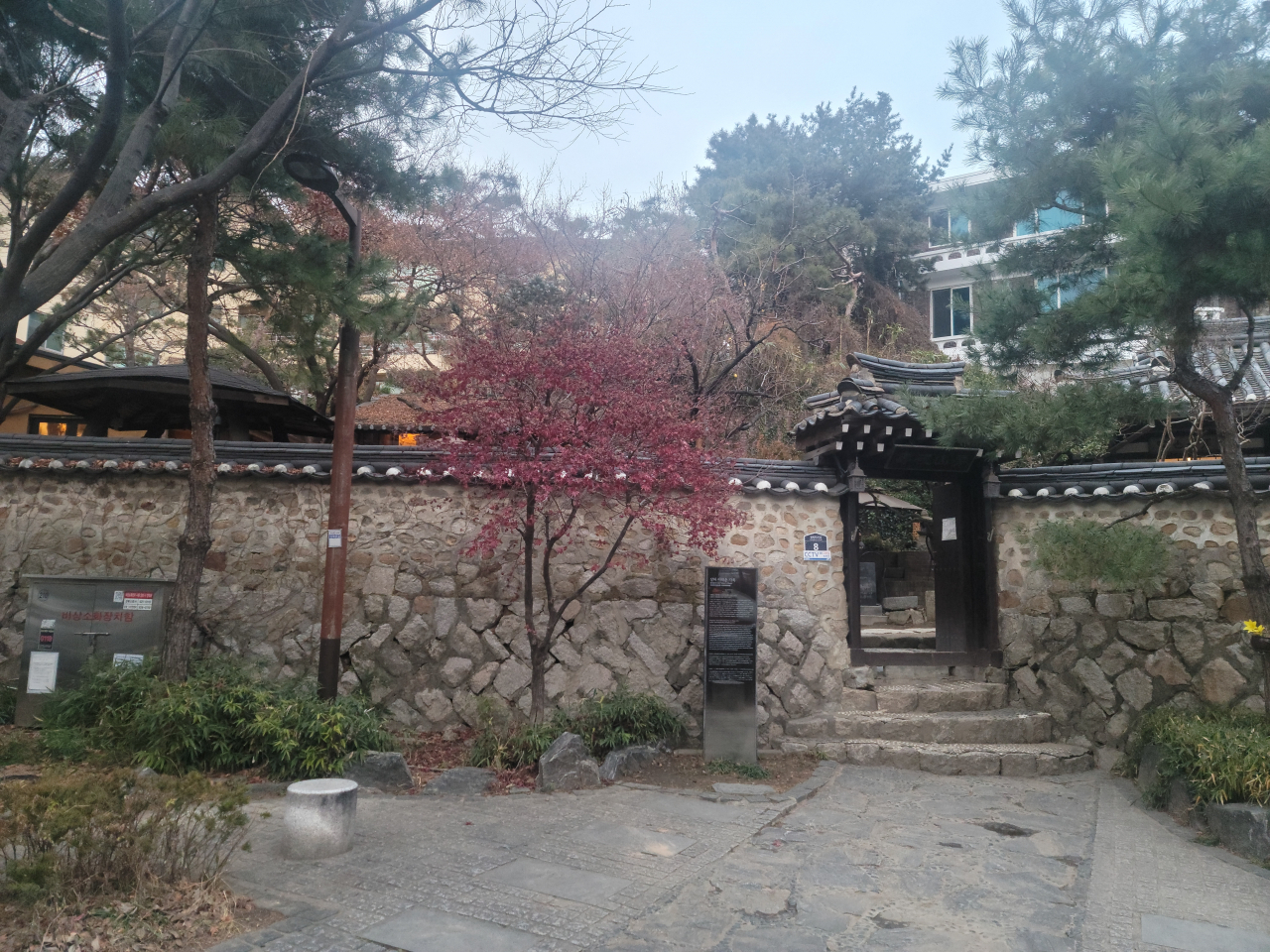 Suyeonsanbang, a hanok tea house located in Jongno-gu. A granddaughter of novelist Yi Tae-jun, a pioneer of short stories in Korea, opened Yi's writing space as a tea house in 1998. (Changbi Publishers)

With a 600-year history as Korea’s capital, Seoul holds many stories.

Those stories are the focus of the two latest books in the bestselling series “My Exploration of Cultural Heritage.”

The first two books on the five Joseon royal palaces and heritages in Seoul were released in 2017. The recently released third book is a travelogue that explores the stories of the neighborhoods within the four gates of the old capital, while the fourth book takes the readers on tours around the areas outside the main gates.

With the latest releases, “My Exploration of Cultural Heritage” series now has 12 volumes on Korea, five volumes on Japan and three volumes on the Silk Road in China. 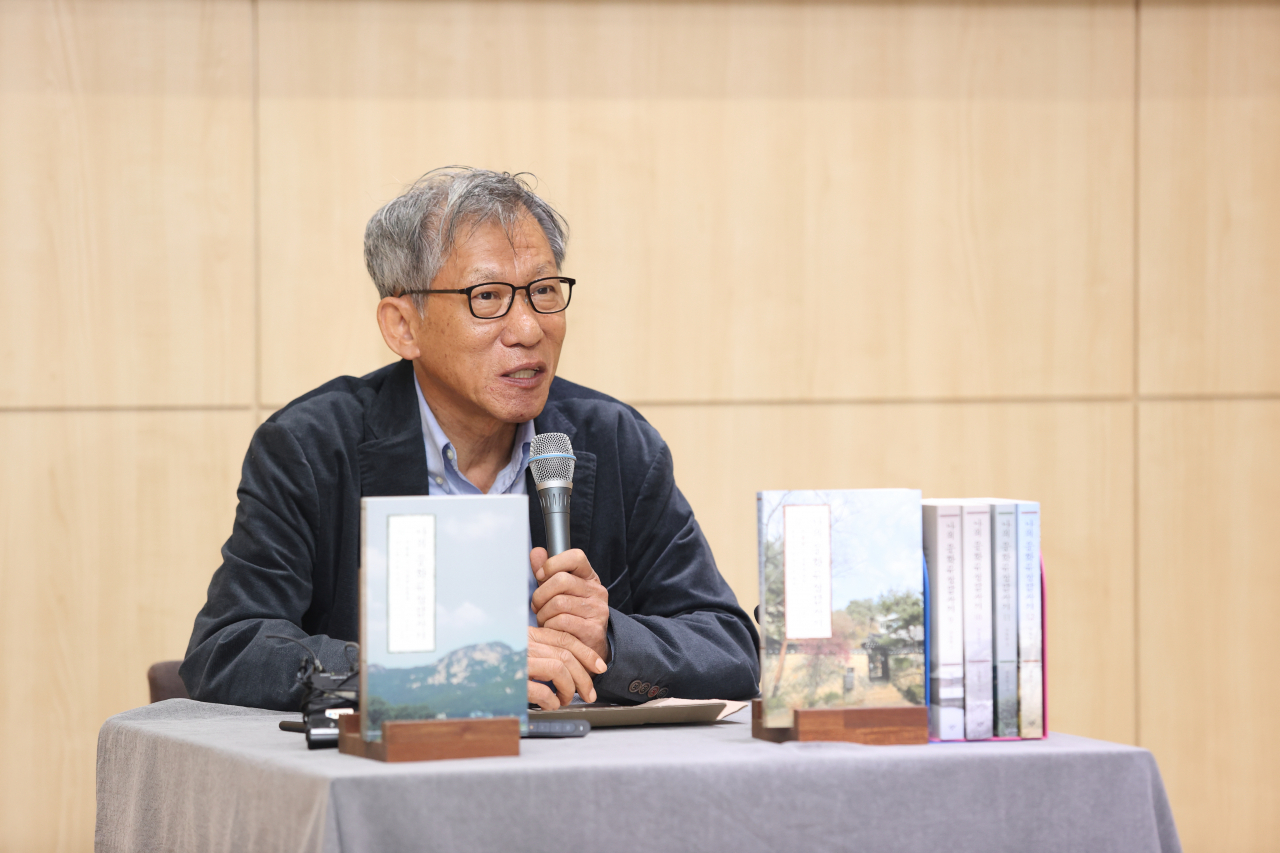 Author You Hong-june speaks at a press conference at the Changbi Seogyo Building in Mapo-gu, Seoul, on Tuesday. (Changbi Publishers)

Speaking at a press conference on Tuesday, the series’ author You Hong-june, chairman of the Academy of Korean Studies and former head of the Cultural Heritage Administration, shared a special memory which motivated him to write his latest books.

"I once ran a series of programs with the Seoul Metropolitan Government and led field trips with the general public. A middle school student who seemed to be having a lot of fun came up to me and gave me a tangerine. ‘How old are you?' I asked, and he answered, ‘We are 48 years apart.’”

You then realized that with such an age difference, his childhood stories were something of “an old tale” to this young student.

“I thought I should write more of the series to record what I have seen and witnessed in my lifetime, and how the city has changed,” You said. “The simplest reason was that I wanted to share.” 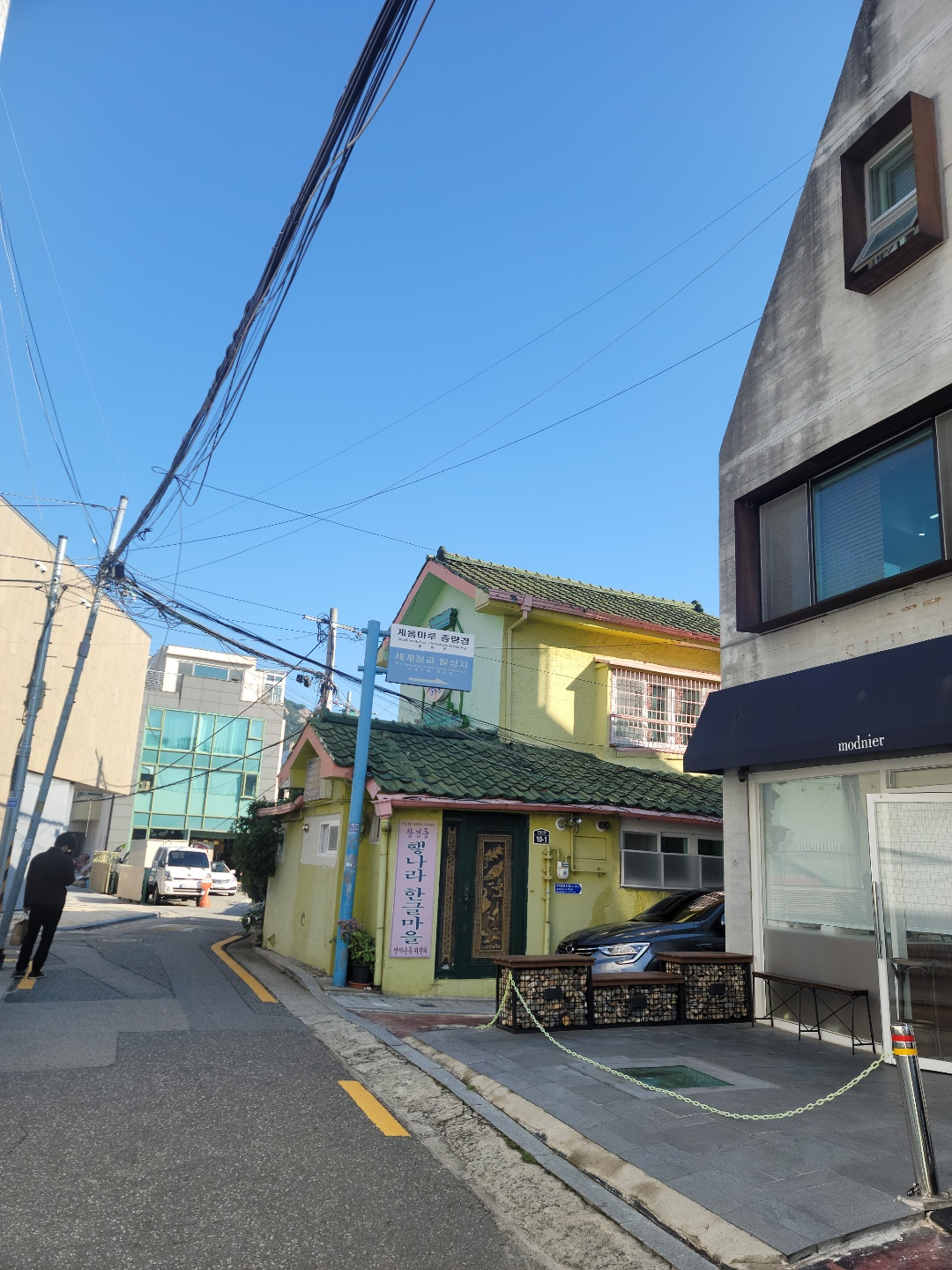 A building in Changseong-dong, Jongno-gu, central Seoul. You's childhood house was located next to the yellow building. (Changbi Publishers)

As a Seoul native, You tells stories of growing up in certain neighborhoods, filled with meaningful cultural and historical heritage alongside stories from its people.

The first volume of the series came out in 1993, marking its 30th anniversary next year. But the author says he still has many more sites to visit for the series. He has already started his exploration for the next book, which will be a pilgrimage to UNESCO World Heritage sites.

“I have embarked on my journey for the next book. It will cover the prehistoric ruins of an archaeological site in Jeongok-ri, Yeoncheon, then move onto the Hansan Island in Tongyeong and come to a finish in Dokdo,” You said.

A tent school in Busan during the Korean War, similar to the Seoul tent school You studied in after the war. (National Archives of Korea, Busan Center)

New story of an old city

In his third book on Seoul, You journeys through Seochon, Bukchon, Insa-dong and old downtown areas within the four main gates -- Heunginjimun, Donuimun, Sungnyemun and Sukjeongmun.

The neighborhoods -- filled with hanok-style houses, traditional shops and historic sites -- are major tourist attractions. Adjacent to the royal palaces, they are also part of a cultural hub which has been home to many writers, painters and artists for hundreds of years.

Born in Changseong-dong, near Gyeongbokgung, the author walks through the old streets and evokes his childhood memories, sharing stories of the place and the people.

He boasts he can walk around the area with his eyes closed. The house where he lived as a child is gone, but the house next door still stands today. As a schoolboy, he studied in a tent school after the Korean War. He recalled that each student had to bring rice sacks, cut them and hang them on the walls to make a tent.

The former head of the CHA shared his opinion on the recent controversies over the opening and use of Cheong Wa Dae.

As the site holds many cultural heritages that are yet undiscovered, the decision to completely open it to the public has greatly undermined its value, according to You.

“It would have been better if they had prepared thoroughly and opened the site to the public. But now that it’s opened, the ideal solution would be to hold a kind of ‘competition’ -- an international kind -- and let ‘experts’ like architects share their opinions and discuss how to utilize it,” said You.

He emphasized that the decision should not be solely dependent on one individual’s opinion -- whether it be the president, a minister or an official director.

“We should have some kind of blueprint and a definite goal and move toward that -- decide what to retain and what to restore -- and gather public opinions along the way.” 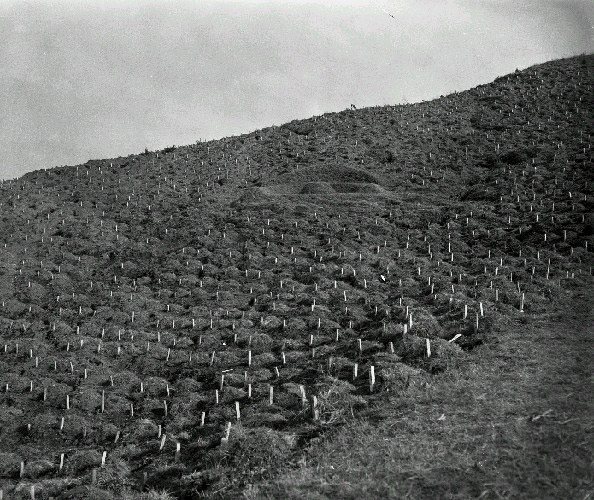 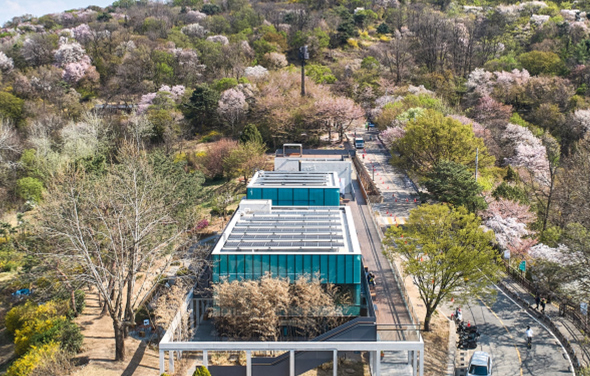 ‘Seoul is wide and deep’

The author brings our attention to a dynamic part of the city which has been continuously expanding.

One particular site he noted is Mang-U History and Culture Park, located in Jungnang-gu, northeastern Seoul.

The site was once a graveyard called “Manguri Cemetery” from 1933 to 1973. It was closed for 50 years and recently reopened in April as a historical and cultural park after renovation.

You starts at the tomb of Yu Gwan-sun, an icon of Korea’s March 1 Independence Movement, and walks through the park to visit the tombs of poets Park In-hwan and Han Yong-un, artist Lee Jung-seob and independence activist Ahn Chang-ho -- people who have played major roles in the independence movement, academia and arts.

A view of Anam-dong, Seongbuk-gu in 1976 (Seoul Museum of History)

How Bukchon has been transformed vividly shows the village’s modernization process. The hanok village we see today is the remains of Seoul’s expansion during the Japanese colonial period. When the capital's population grew exponentially in the 1930s, small-scale and urbanized hanoks -- different from large mansion-style hanoks -- were built on a mass scale to meet the sudden surge in housing demand. 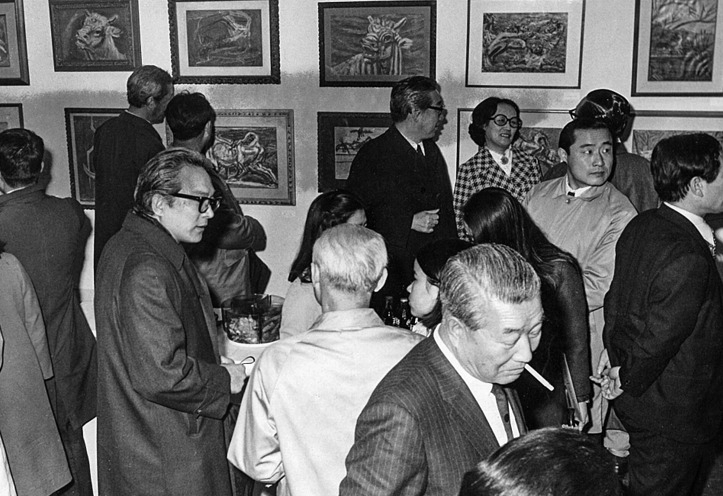 The opening ceremony of Lee Jung-seop's work exhibition held at Hyundai Gallery in February 1972. Hyundai Gallery, opened in Insa-dong in 1970, was one of the first galleries to sell art in Korea. (Gallery Hyundai)

The neighborhood of Insa-dong holds the history of modern Korean culture and arts. The village was the main stage for national and cultural movements during the Japanese colonial period. The street’s scenery changed with the emergence of old bookstores in the 1960s and antique art dealers and art galleries in the 1970s and 1980s. Since the 1990s, the street has been a tourist destination. 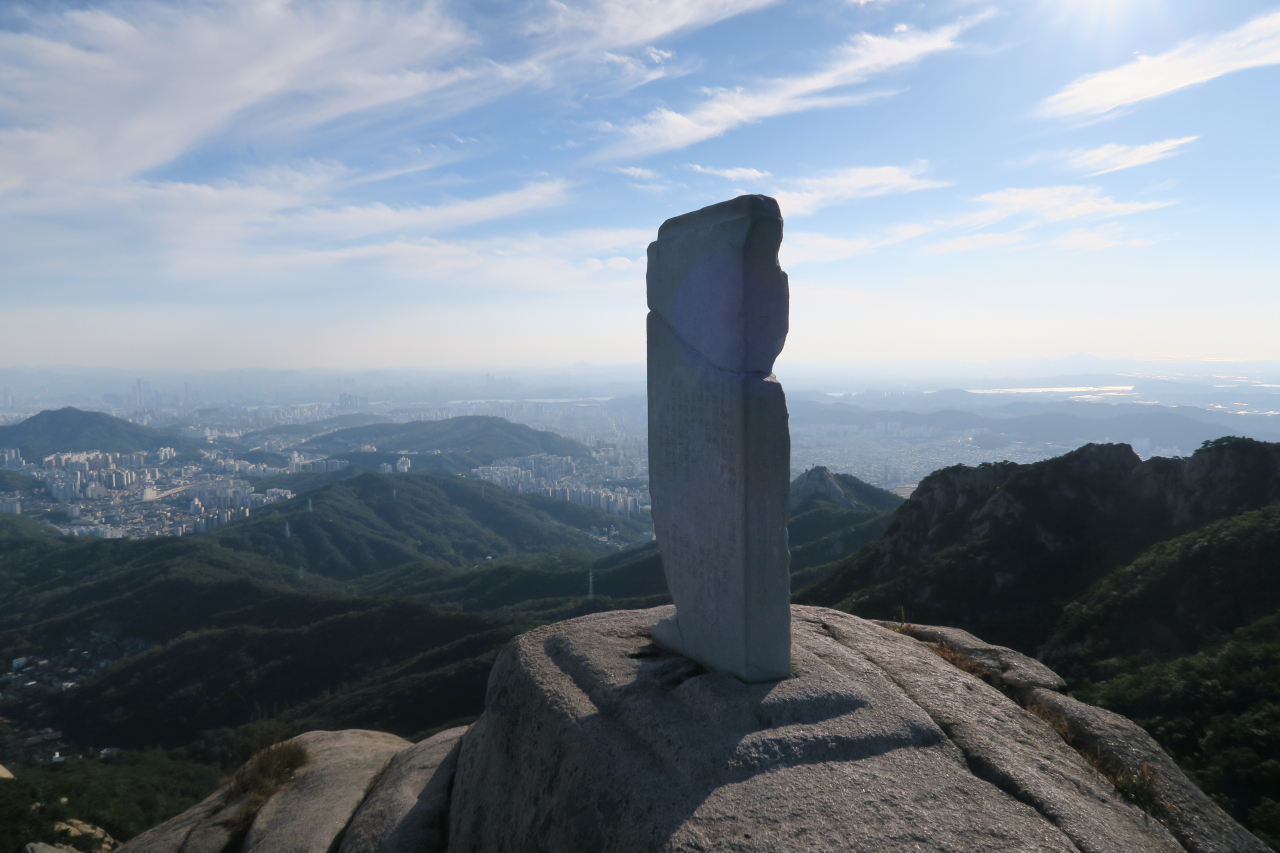 A replica of the Bukhansan Monument at Bukhansan (Changbi Publishers)

Bukhansan is a beautiful backdrop to the city. The author pays special attention to the Bukhansan Monument, which was designated as a national treasure in 1962. The stone stele was erected at the order of King Jinheung of Silla Kingdom to commemorate a border inspection. The original stele is housed at the National Museum of Korea and a replica, built in 2006 when You was serving as the head of the CHA, stands at the mountain’s Bibong Peak.