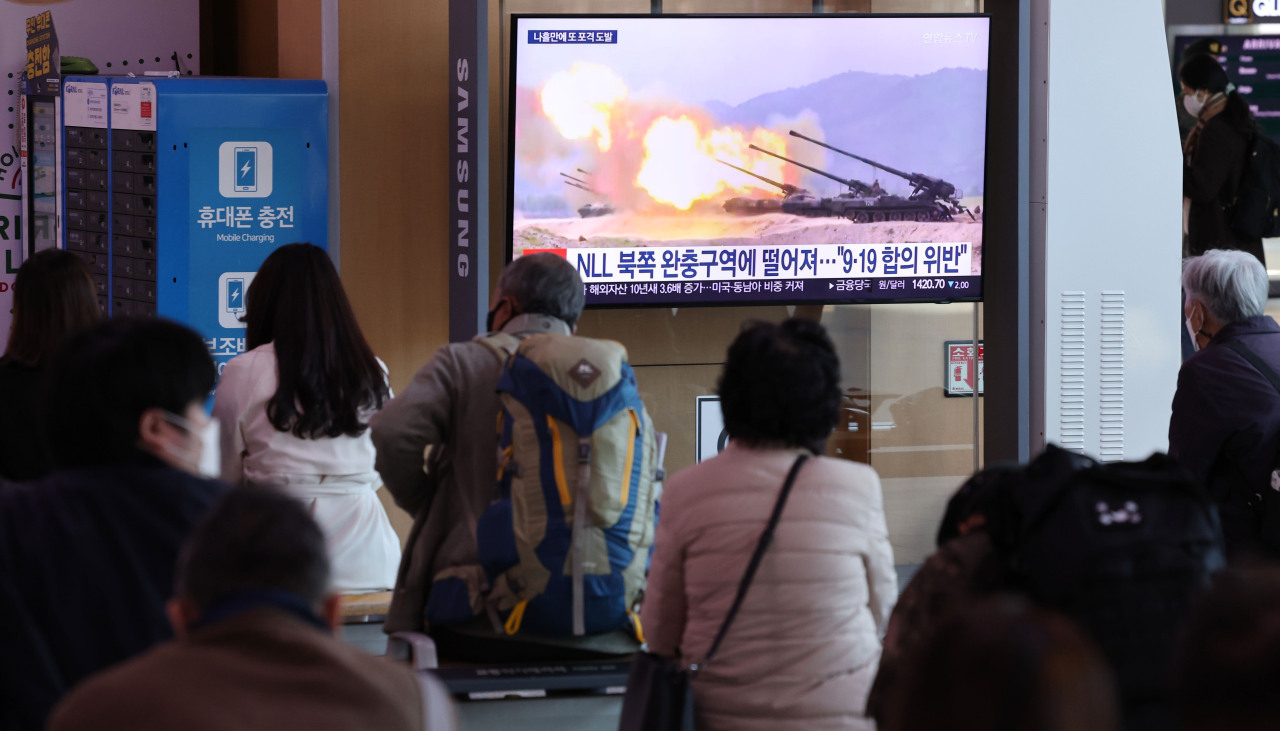 This photo, taken on Oct. 19, shows a news report on North Korea`s firing of artillery shots into maritime buffer zones being aired on television at Seoul Station in central Seoul. (Yonhap)
North Korea has continued to fire hundreds of artillery shells into inter-Korean maritime buffer zones, while justifying the barrages as “strong countermeasures” against live-fire exercises staged by “enemies” near the inter-Korean border.

South Korea’s Joint Chiefs of Staff said Wednesday that North Korea unleashed another artillery barrage near the inter-Korean border starting from 12:30 p.m. on the day.

The South Korean military detected North Korea firing around 100 artillery shells from the area of Yonan County in South Hwanghae Province toward the West Sea, according to the JCS.

The artillery shots fell inside inter-Korean maritime buffer zones, but north of the Northern Limit Line. The two Koreas agreed to cease all live-fire and maritime maneuver exercises in the buffer zones in a military tension reduction deal signed during the inter-Korean summit on Sept. 19, 2018.

South Korea’s JCS said the firing of artillery into the maritime buffer zones was a “flagrant violation of the Sept. 19 military agreement.”

“North Korea’s continuing provocations are an act of undermining the peace and stability of the Korean Peninsula and international community,” the JCS said. “We send a grave warning and strongly urge North Korea to immediately stop such acts.”

An unnamed spokesman for the General Staff of the Korean People’s Army immediately issued another statement after unleashing a barrage of artillery shells Wednesday afternoon.

In the statement, the KPA General Staff claimed that “enemies” fired around 10 artillery shots from multiple-rocket launchers between 08:27 a.m. and 9:40 a.m. “near the forward defense area” of the KPA 5th Corps, referring to Cheorwon County in Gangwon Province. But the statement did not specify which enemies it meant.

“Our military strongly warns that the enemies should immediately stop provocative actions in front-line areas.”

Notably, the United States Forces Korea on Monday began conducting five-day live-fire artillery drills at the Damteo Valley training area in Samyul-ri in Pocheon, Gyeonggi Province, multiple military sources confirmed to The Korea Herald. One military source said the training camp was owned by South Korea, but the South Korean military has not recently conducted drills at the camp.

The public notice provided by Cheorwon County said that a total of 96 artillery shells were set to be fired from multiple-launch rocket systems from Monday to Friday.

The KPA General Staff has issued four statements to justify the artillery firing as a military counteraction against defense-oriented live-fire drills that South Korea and the US have conducted regularly south of the inter-Korean buffer zones.

Wednesday’s artillery firing came half a day after North Korea’s bombardment of around 250 artillery shells toward inter-Korean maritime buffer zones on Tuesday night.

North Korea fired around 100 artillery rounds from the area of Jangsan Cape in South Hwanghae Province into the Yellow Sea from around 10 p.m., South Korea’s Joint Chiefs of Staff confirmed on Wednesday. From 11 p.m., an additional 150 artillery shells were fired from in the area of Jangjon in Kangwon Province, off the east coast.

An unnamed spokesman for the General Staff of the Korean People’s Army on Wednesday morning issued another statement hours after unleashing a barrage of artillery shells on Tuesday night.

The KPA General Staff said the “situation on the Korean Peninsula has continued to deteriorate due to military provocations consecutively carried out by the enemies in front-line areas.”

“The General Staff of the Korean People’s Army particularly takes this provocative move seriously, which was carried out at a time when enemies’ war exercises for an invasion of North Korea, Hoguk-22, take place frantically.”

After North Korea consecutively fired artillery barrages last week, the KPA General Staff issued the statements two times, on Friday and Saturday, to legitimize its artillery firing in violation of the inter-Korean military agreement as countermeasures against the South Korean military.

But the South Korean military sources last week elucidated that the live-fire drills the KPA General Staff referred to were the ones staged by the United States Forces Korea.

After South Korea’s explanation, the KPA General Staff notably claimed on Wednesday that the firings of artillery barrages aimed to counter the military actions by “enemies.”