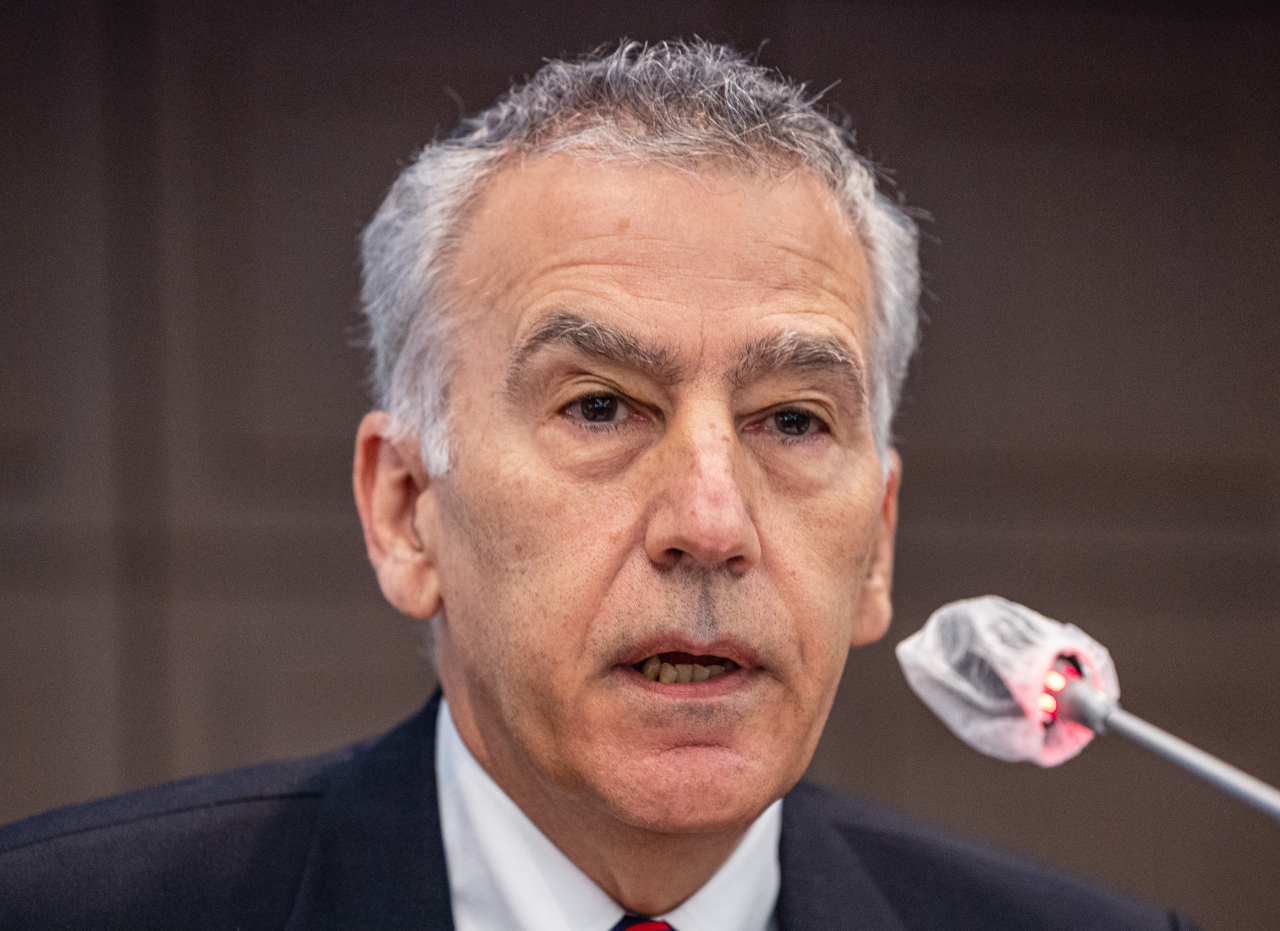 US Ambassador to South Korea Philip Goldberg speaks at a conference organized by Kwanhun Club in Seoul on Tuesday. (Yonhap)

US Ambassador to South Korea Philip Goldberg said Tuesday all talk related to tactical weapons is "irresponsible" and "dangerous," as the idea of redeploying tactical nuclear weapons in South Korea resurfaces following a string of provocations from North Korea.

Speaking at a forum organized by a journalist group to mark his 100th day in office, Goldberg also said the US' extended deterrence, which includes the country's nuclear capabilities, is the measure to handle North Korea's increasing provocations.

"All we can do in the face of provocations, threats to peace, security and stability on the Korean Peninsula is respond with determination, with resolve with extended deterrence, which includes all capabilities that the United States possesses." Goldberg said in the forum held by Kwanhun Club, a journalist organization based in Seoul.

"We have a huge commitment to Republic of Korea and its security and to the people of South Korea," he said.

"All this talk about tactical nuclear weapons, whether it comes from Putin, or Kim Jong-un is irresponsible and dangerous, and escalation of those kinds of threats or speculations, I don't think help the situation," he said, referring to Russian President Vladimir Putin and the North Korean leader.

Goldberg also stressed that "everything" that the North does is illegal and not only violates United Nations resolutions, but also its own commitments. What the US and its allies are doing in response are all within the framework of "accepted international norms and laws," he added.

Regarding the ongoing dispute on the impacts of the US' Inflation Reduction Act against Korean electric vehicle makers selling products in the American market, Goldberg said the US administration is making efforts to address the concerns. He also said Korean companies would benefit from the law in the long term.

"With regard to the Inflation Reduction Act, Korea has voiced serious concerns about electric vehicle incentives outlined in the legislation, and we are committed to continuing discussions on ways to address them," the ambassador said.

"I would add that we believe that many Korean companies stand to benefit from the various investment incentives in the act."

The IRA, which aims to provide incentives to electric vehicles made exclusively in North America was signed into law by US President Joe Biden on August 16. Since South Korean EV makers, mainly Hyundai motor and Kia, produce their flagship models in Korea to export them to the US market, they immediately lost their subsidies, losing competitiveness in price.

"I disagree with anyone who attempts to characterize our bilateral economic relationship as a zero-sum game in which if American companies are winning, Korean companies will lose," Goldberg said.

"This completely neglects the fact that Korean and American businesses are working together and collaborating across every sector of the economy. "

His remark appears to implicitly refer on how China has accused the US of exploiting the alliance with South Korea for its own benefits, while warning Seoul not to be too dependent on Washington.

A day earlier, Goldberg, speaking in a video interview, underscored how the US continues to call for Pyongyang to engage in "unconditioned" talks, but that there is "little room for negotiations" when the regime refuses to talk.

The US also seeks for China to play a role in deterring North Korea's military provocations, as it serves no interest to any country, including Beijing itself, the ambassador said in the video released on YouTube late Monday.

"We've offered humanitarian aid and COVID assistance (to North Korea). They don't seem to want it," Goldberg said. He was interviewed by Kim Ji-yoon, a senior research fellow at the Institute of Democracy Studies and Education who runs the YouTube channel Kim Ji-yoon's JisikPlay.

"It seems that missiles are more important than the people of North Korea and there isn't much we can do about that except to work with our alliance partners here and elsewhere in the region, but particularly here to deter and convince the DPRK that we are serious about the defense of this country (South Korea), an allied country and a very good ally." DPRK refers to North Korea's official name, Democratic People's Republic of Korea.

As the world faces a series of crises, including the Ukraine-Russia war, North Korea and its nuclear program is still a top priority for the US, the ambassador said. The US is committed to building up extended deterrence to protect South Korea from the North's nuclear threats, he added.

Last month, South Korea and the US held a joint naval drill, where a US nuclear-powered aircraft carrier USS Ronald Reagan took part in the exercise for the first time in five years in response to the consecutive missile launches by the North.

When asked about the US’ expectations for South Korea should China invade Taiwan, Goldberg explained how the commitment of the alliance of the two countries is centered on the peninsula, and anything else would be “hypothetical.”

“Korea and the US have a very strong alliance. I think that our security relationship is centered here on the peninsula. That is the commitment and the commitments that we carry out,” Goldberg said.

“That's our primary role and partnership is here and keeping the peace on this in the Korean Peninsula. Anything else would be very hypothetical.”