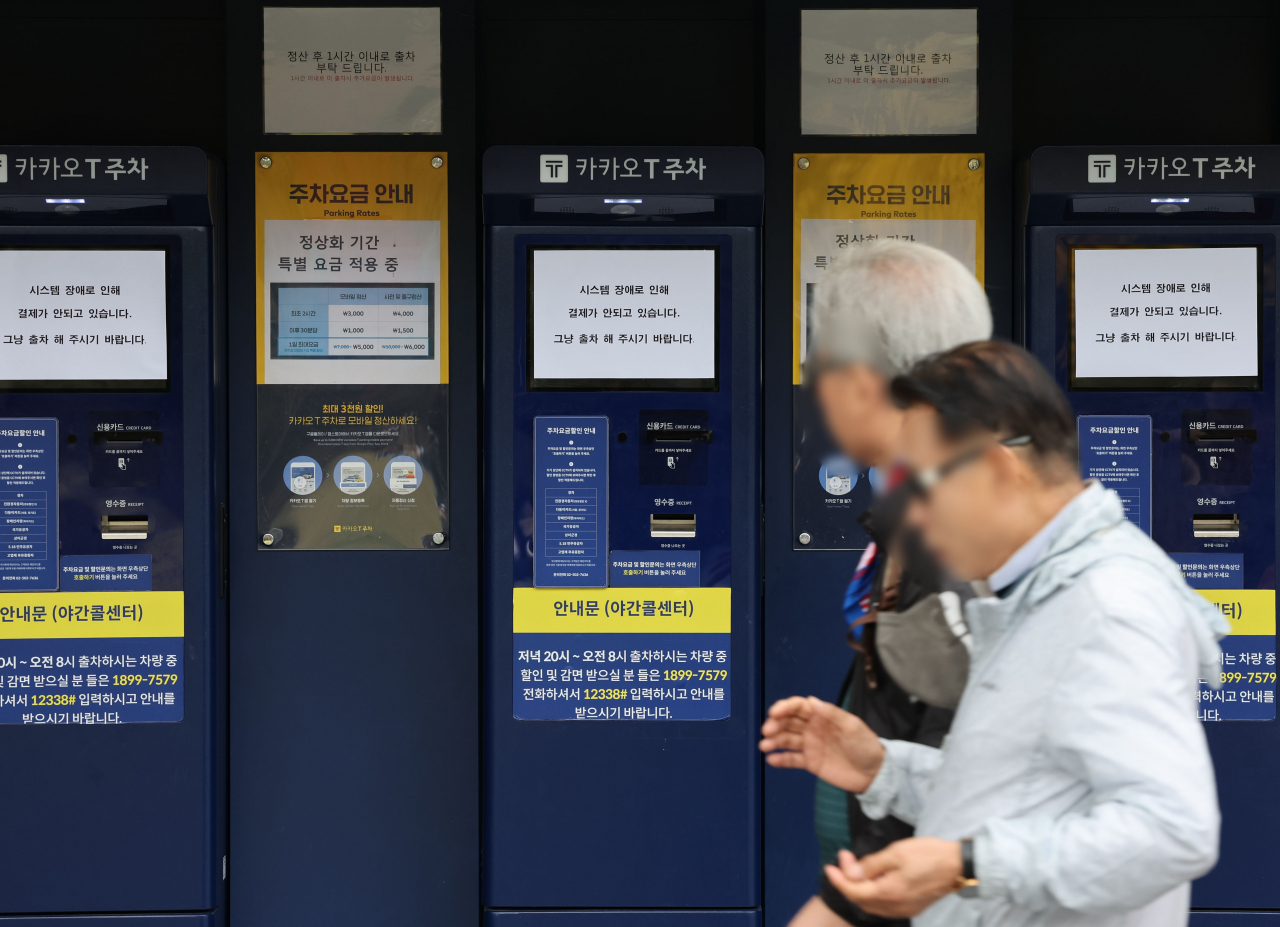 A notice was posted on an unmanned payment machine at a Kakao T parking lot in Gwacheon, Gyeonggi Province on Sunday to notify the system failure as service disruptions continued. (Yonhap)

KakaoTalk's outage over the weekend has spilled over into the political arena, with the president and political parties honing in on the nation's largest messaging app operator.

On Monday, President Yoon Suk-yeol said that the state would respond to revamp the system, considering communication networks as a part of the national infrastructure. The government is also looking at whether a Kakao monopoly could distort the communication network services market. Lawmakers hurriedly promised to devise legislative measures to prevent a recurrence, calling the service failure a “national disaster.”

Kakao is the nation’s most popular messaging app with 47.5 million monthly active users in Korea, more than 90 percent of South Korea's population of 51.74 million. The company's messaging, ride-hailing and other services suffered disruptions on Saturday and Sunday due to a fire at a data center that prompted the outage.

In a regular morning press briefing, Yoon hinted at a response involving both the legislative and administrative branches.

“Although Kakao is a network operated by a private company, it is virtually no different from a national communication network from the perspective of the people.”

He vowed to revamp the system by discussing the matter with the National Assembly so that people will not be inconvenienced in the future.

When asked whether there is any area for the government to discuss improvements given Kakao’s near-monopolistic market share, Yoon replied, "I have a free market economic mindset that respects corporate autonomy and creativity, but that is based on the premise that the market itself has reasonably allocated resources and income in a system of fair competition."

Yoon said, "I understand that the Fair Trade Commission is looking at the matter."

The presidential office sees the service disruptions as a serious problem that could even harm national security if left unaddressed.

A day earlier, presidential spokesperson Kim Eun-hye said in a briefing, "In a hyperconnected society, data communication infrastructure is directly related to national security and people's lives. It not only causes harm but also causes fatal problems to national security in case of an emergency.”

The task force plans to hold a meeting presided over by national security adviser Kim Sung-han and to monitor the cybersecurity situation. The meeting will be attended by senior officials from the ICT and Defense ministries, Supreme Prosecutors' Office and the National Police Agency.

The ruling and opposition parties hurriedly announced Monday that they would prepare “legislative measures” in relation to the disruption of Kakao’s services.

The ruling People Power Party defined this situation as a “human-made disaster created by insensitivity to safety,” while the main opposition Democratic Party of Korea labeled it a “national disaster.”

People Power Party Floor Leader Joo Ho-young said at an emergency response committee on Monday, "As the country has to sufficiently prepare for North Korean provocation threats such as network disruption, it is urgent to prepare related countermeasures from the national security level."

“As many people and experts point out the need to prevent excessive monopoly over the current situation, the ruling and opposition parties will reach an agreement for the prevention of a monopoly and effective safety measures and create a good plan as soon as possible,” he said.

Rep. Seong Il-jong of the ruling party said, “The root cause of Kakao’s failure is that it does not have perfect redundancy. In order to prevent the same situation in advance in the future, server redundancy should be mandatory.”

He vowed to open a meeting with the ruling party and the government to address the problems and take measures to prevent future inconveniences for the people.

Park Hong-geun, floor leader of the main opposition Democratic Party, also said on the same day that relevant standing committees such as the ICT committee, political affair committee, industry committee and transportation committee will check the overall status of the establishment of data backup systems of online platform companies.

“Taking this incident into account, we will quickly come up with legislative measures so that we do not become helpless in a digital platform disaster,” he said.

Democratic Party spokesperson Im Oh-kyung said at a briefing on the day, “All (Kakao) services such as messengers, taxis and finance were suspended, and the people suffered inconveniences all day."

“The Democratic Party will examine the cause of the accident and countermeasures through a state inspection and come up with measures to improve the system,” Im said.

The Science, ICT, Broadcasting and Communications Committee has decided to call Kakao founder Kim Beom-soo as a witness to the upcoming audit slated for Oct. 24.

Committee Chairperson Chung Cheong-rae said, "We will limit the scope of the witness interrogation on Oct. 24 to issues related to the service disruption of Kakao due to the SK C&C data center fire."

At the time of the fire at the SK Pangyo, Gyeonggi Province, data center, it was found that a battery in the electrical room of the third basement floor caught fire, shutting off power for the entire center to extinguish the fire, and server functions for Kakao as well as Naver were stopped.

As data centers are increasingly prevalent across the country and demand for data surges, it is necessary to supplement the system in preparation for similar accidents, experts say.