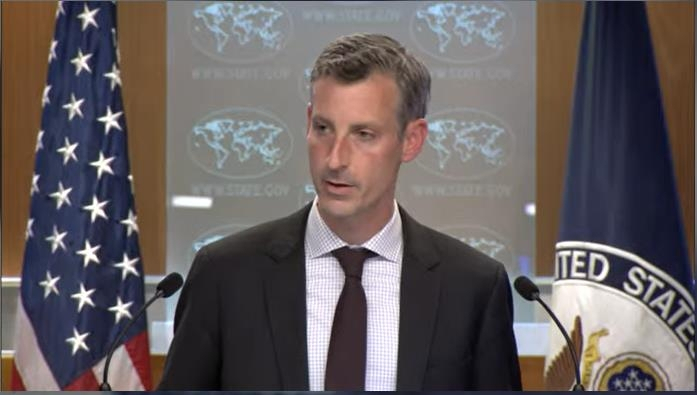 US Department of State spokesperson Ned Price is seen answering questions during a daily press briefing at the department in Washington on Wednesday in this image captured from the department's website. (Yonhap)

WASHINGTON -- The United States will continue to hold North Korea responsible for its provocations, a state department spokesperson said Wednesday, insisting the US has the means to do so.

"We have been clear that as long as the DPRK continues with its provocations, continues with its launches of ballistic missiles, including longer range ballistic missiles, and the sorts of provocations that we've seen intensifying on the part of the DPRK in recent weeks, we will continue to hold responsible those who are overseeing the DPRK's WMD and nuclear weapons programs," Price said in a daily press briefing when asked if there are steps that can really hurt North Korea.

"This is something that we are doing with our own authorities," Price said, apparently referring to US sanctions announced last week on individuals and entities engaged in illegal ship-to-ship transfer of petroleum products with North Korea.

"But it is also something that we will need to discuss with our allies and partners, including in the Indo Pacific, with our partners in New York and our partners around the globe, to see to it that we are doing everything we can to hold accountable those who are placing their WMD programs over the welfare of the people of the DPRK," he added.

The US has failed at least twice, and as recently as last week, to impose new U.N. Security Council (UNSC) sanctions on North Korea this year, due to opposition from China and Russia, both veto power-wielding permanent members of the UNSC and close friends of North Korea.

Price insisted the US possessed "appropriate tools" to hold North Korea accountable for its provocations, including a potential nuclear test.

Both Seoul and Washington have noted the North may have completed all preparations for a nuclear test that will mark the seventh of its kind. Pyongyang conducted its sixth and last nuclear test in September 2017.

"If the DPRK has the erroneous belief that the types of provocations that it has mounted, especially in recent weeks and recent months, give it any additional leverage, the consequences that it will bear from the international community will prove once again that is not the case," he added. (Yonhap)