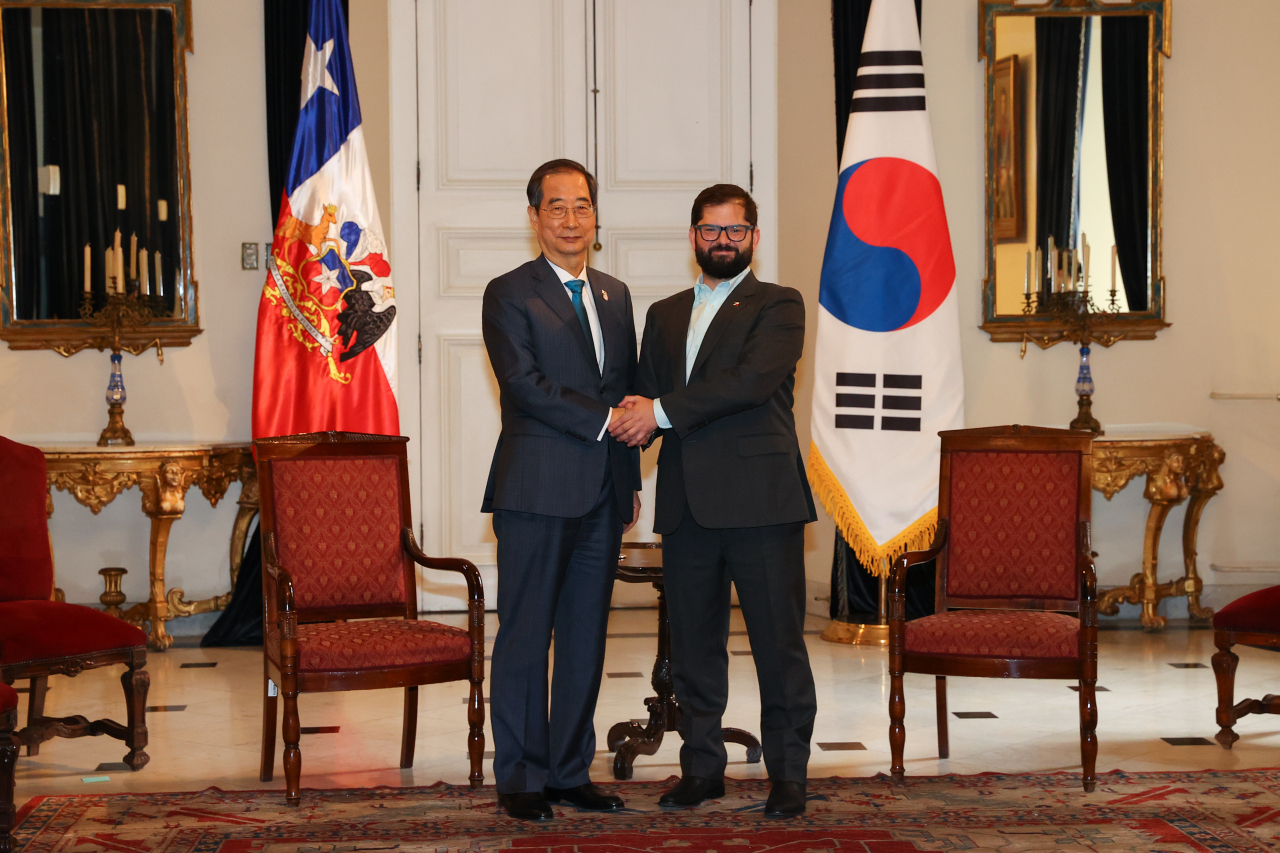 They also agreed to elevate bilateral relations to a strategic partnership as the two nations mark the 60th anniversary of establishing diplomatic ties this year.

Chile was South Korea's first free trade deal partner, and the deal has served as a springboard for South Korean firms seeking to tap the Central and South American markets.

After the talks, Han told reporters that such agreements could serve as "an opportunity to solidify Chile as a partner in South America."

Han and Boric exchanged opinions to deepen cooperation in the fields of trade, investment, mineral resources and climate change.

Han also asked Boric for support for South Korea's bid to host the 2030 World Expo in the southeastern port city of Busan.

On the sidelines of the talks, the Korea Mine Rehabilitation and Mineral Resources Corp. signed a memorandum of understanding (MOU) with its Chilean counterpart on the supply of mineral resources.

The MOU is part of South Korea's efforts to diversify supply chains of key raw materials used in batteries, in a move to cope with the US Inflation Reduction Act.

The US law gives tax credits only to electric vehicles assembled in North America, preventing South Korean carmakers from receiving such credits.

Under the US law, however, South Korean carmakers could receive the subsidies if they use raw materials produced in the United States or Chile, which signed a free trade deal with Washington, for batteries in electric cars.

Han told reporters that the MOU would "significantly help" South Korea cope with the US law.

"I think we should invest more in Chile for raw materials, such as minerals, which are key to economic security," Han said.

Later in the day, Han delivered a keynote speech at a meeting of the Economic Commission for Latin America and the Caribbean.

South Korea, Central America and Latin America "will be able to strengthen cooperation based on mutual trust as effective partners contributing to the stability of the global supply chain," Han said in the speech.

In particular, South Korea could become a reliable partner for Central and Latin American nations in the fields of hydrogen economy, farm renovation and digital innovation, Han said.

Chile is the first leg of Han's three-nation trip that will also take him to Uruguay and Argentina. (Yonhap)