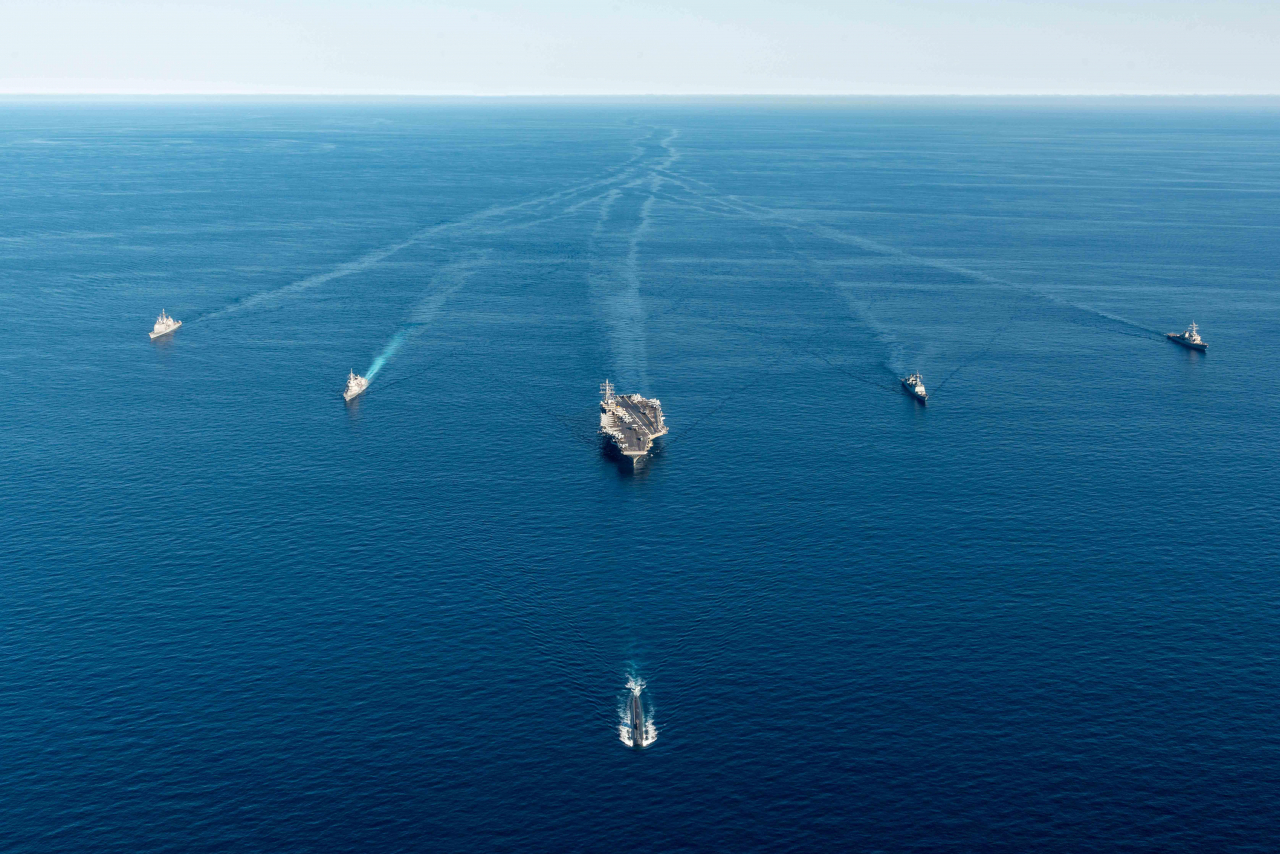 Naval ships, including the USS Ronald Reagan aircraft carrier, participate in a joint anti-submarine drill between South Korea, the United States and Japan in the East Sea on Sept. 30. (South Korean Navy)

The recent trilateral naval drill among South Korea, US and Japan has become the center of a dispute, after the main opposition party leader denounced it as “pro-Japanese.”

"It feels like stepping stones are being laid one by one toward (forming) a military alliance of South Korea, the US and Japan," Lee said in a YouTube livestream on Monday, reigniting the accusation he raised against the government after the trilateral military drill took place on Sept. 30.

Accused of being “pro-Japanese” to hold the combined military exercise involving Japan, the presidential office said earlier on Monday it was “crucial to accurately understand the serious security situation of the Korean Peninsula and East Asia and to properly prepare.”

In a statement, the presidential office said, “the matter of protecting the lives and the safety of the people is not of words but a matter of reality.”

The presidential office only cited many media inquiries as the reason for releasing the statement, avoiding to directly address the accusation made by the opposition.

Following the series of ballistic missile launches by North Korea, Seoul, Washington and Tokyo carried out an anti-submarine warfare exercise in international waters of the East Sea to counter Pyongyang’s mounting submarine threats, on Sept. 30.

Regarding the trilateral military exercise involving Japan that was conducted for the first time in five years, Lee Jae-myung called it an “extreme pro-Japanese act” and a “defense disaster” that acknowledges Japan’s Self-Defense Forces as an official military.

"Holding joint military exercises between South Korea, the US and Japan can be interpreted as acknowledging Japan's Self-Defense Forces as an official military," Lee said in a party meeting Friday.

"This is an extreme pro-Japanese act. We cannot but to think of it as extreme defense (policy) of pro-Japanese, after (the administration’s) crow-eating diplomacy toward Japan,” Lee said in a party meeting on Friday.

“I am afraid what President Yoon Suk-yeol had said, that the (Japan’s) self-defense forces can enter the Korean Peninsula in case of an emergency, will be realized.”

Calling it a “defense disaster,” Lee accused the Yoon administration of helping Japan become a military power, and urged the government to apologize.

The ruling People Power Party fired back, saying Lee’s claim echoes the opinion of the North Korean leader Kim Jong-un who opposes the trilateral military bonds of South Korea, Japan and the US.

“(Democratic Party) Chairman Lee’s accusation of pro-Japanese defense (policy) is very poor. The combined military exercise of South Korea, Japan and the US was conducted in October 2017 under the Moon Jae-in administration after the defense chiefs of the three countries agreed,” Rep. Chung Jin-suk, the interim chief of the ruling People Power Party said in a Facebook post Sunday.

“(Under Lee’s logic), the organizer of ‘pro-Japanese’ defense policy would be former President Moon Jae-in.”

Na Kyung-won, former lawmaker affiliated with the People Power Party also criticized the Democratic Party leader Lee, saying the trilateral military cooperation of South Korea, the US and Japan is the “basics of the basics” to prepare against North Korean threats.

“Even yesterday night, North Korea fired two short-range ballistic missiles. It has been laid bare to the whole world that peace from the teeth forward, fake peace, cannot protect anything,” Na said in a Facebook post on Sunday.

“Is he saying we should not conduct joint drills and just take it sitting down?”

Tensions have been running high on the Korean Peninsula since North Korea carried out a series of ballistic missile launches, including one intermediate-range one that flew over Japan.

In its latest provocation, Pyongyang test-fired two short-range ballistic missiles into the East Sea on Sunday, marking its seventh missile launch in 15 days.