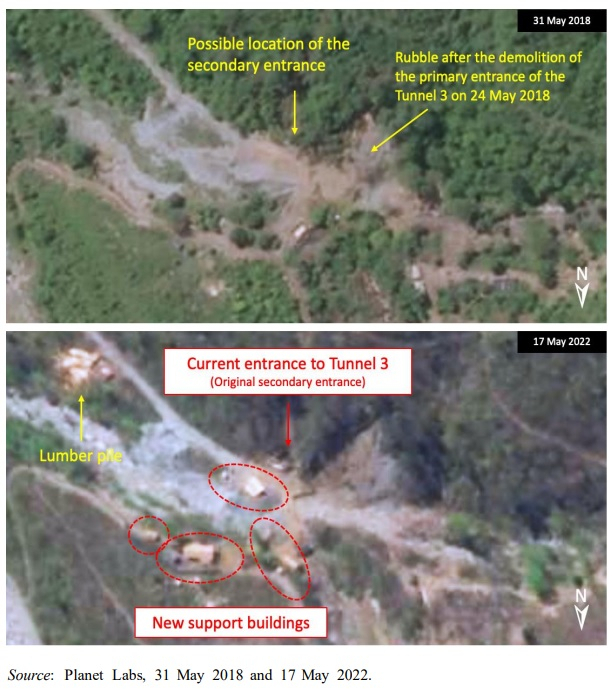 Previous (May 2018) and recent images of Tunnel 3 at the Punggye-ri nuclear test site in North Korea. (Planet Labs)

North Korea is in its final stage in preparations for nuclear tests and has made progress in its missile programs by launching an unprecedented number of ballistic missiles this year, a United Nations Security Council panel said in its biannual report.

"During the reporting period, the Democratic People’s Republic of Korea made preparations at its nuclear test site, although it did not test a nuclear device," the panel report said, using the formal name for North Korea.

The report said North Korea continued to develop its capability for the production of nuclear fissile materials at the Yongbyon nuclear testing site, and also appears to have completed preparations for nuclear tests during the reporting period.

The movements involving its nuclear and intercontinental ballistic missile tests have been observed as in line with how the North's Political Bureau of the Central Committee of the Workers’ Party of Korea has announced that it would “promptly examine the issue of restarting all temporarily suspended activities,” in January.

The panel wrote that Pyongyang started reexcavation around a secondary entrance to Tunnel 3 at the Punggye-ri nuclear site in March this year, and also reconstructed support buildings that were dismantled in May 2018.

Citing the assessment of a member state, the report said Pyongyang continued to operate the 5-megawatt reactor as well. Satellite imagery shows the reactor continuing to discharge cooling water since July 2021, and vehicles were spotted moving around the reactor, the report said.

From their observations through early June, two member states have assessed that preparations for nuclear tests have entered their final stage.

The ballistic missile program has also continued to accelerate to attain "an unprecedented intensity, diversity and operational capability" in terms of both the ballistic tests themselves and the regime's communication strategy about them, the report said.

The panel said rapid and observable progresses are seen to have been made on its intercontinental ballistic missiles program and short-range ballistic missiles, for its development of tactical nuclear operational capabilities.

The report also noted that Pyongyang has continued with its cyber activities, with two major hacks this year that resulted in the theft of cryptoassets worth hundreds of millions of US dollars.

There were also North Korean students studying abroad sending back technical information on weapons to their country, as observed by one member state.

The UNSC Panel of Experts was established in 2009 to support the work of the council's sanctions committee on North Korea. The members include experts from the five permanent members of the UNSC -- the US, China, France, the Russian Federation and the United Kingdom -- as well as South Korea, Japan and Singapore.

The report is published twice a year. The October report covered sanctions implementation from end-January to end-July, and was published on Friday after it was confirmed at the council on Sept. 6.