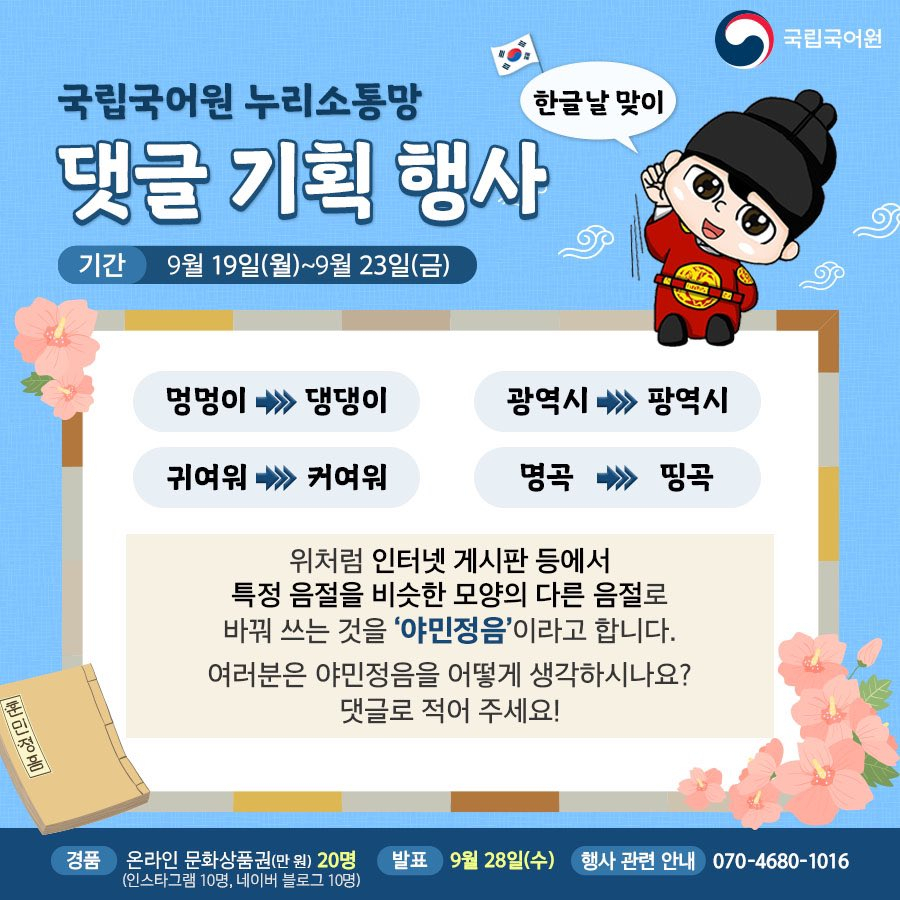 The National Institute of Korean Language’s use of slang words on its recent social media post has stirred controversy, questioning whether it is right for the state-run language regulator to use a distorted version of the language.

To mark the upcoming Hangeul Day on Sunday, the institute had posted an image to announce its special event on its Twitter account last month. In the posted image, it asked the followers what their views are on using the so-called “Yaminjeongeum.”

Yaminjeongeum -- a composed word of Hunminjeongeum, the early form of Hangeul, and “Yagu Gallery,” an anonymous online message board for baseball fans -- is a term that was widely used by the users of the forum and later spread widely as an internet meme.

This word play modifies Hangeul words by changing a syllable or a vowel to one that looks similar. For example, the Korean syllable 멍 ("Meong") is substituent for 댕("Daeng") and 커 ("Keo") is for 귀 ("Gwi") because of their visual similarities.

In the controversial image, the institute gave examples of Yaminjeongeum, and included words like “daengdaengi,” originated from “meongmeongi” (dog), and “keoyeowo,” originated from “gwiyeowo” (cute), which are both words that are in popular use.

The post drew harsh criticism online, with users claiming the event can be seen as the government agency responsible to preserve Hangeul approving of the internet meme that is "destroying" Hangeul. Met with backlash, the institute took down the post two hours later and decided to scrap the event.

“We had just regarded it as wordplay that Korean speakers enjoy. But after our social media followers informed us where the Yaminjeongeum came from, we decided to halt the event,” a NIKL official was quoted as saying in an interview with local media.

With its unique shapes, Hangeul allows many kinds of manipulation.

Of them, Yaminjeongeum, which reportedly began to go viral in the mid-2010s, has survived for years and secured broad usage among younger generations. They use the word manipulation for diverse purposes from using them just for fun to keeping sensitive words unsearchable on the internet.

This type of wordplay has been widely used to criticize politicians, especially presidents. When the protest against former President Park Geun-hye was underway in 2016, some citizens changed the "Geun" (근) in her name into the Korean letter "Rieul" (ㄹ) on social media. This came at a time when the Park administration had taken strong action against people defaming Park.

Some users also use Yaminjeongeum for backbiting. They manipulate the way celebrities’ names are written to post negative comments without getting caught by celebrities or their fans. There are others who make hate speech by butchering the names of certain regions in Korea, targeting those who come from those regions.

Some observers are also concerned about Yaminjeongeum’s origin. “Yagu Gallery,” which the meme originated from, is a right-wing website that has been criticized for openly expressing strong opinions, name-calling, violent words against certain groups of people.

Critics warn the need for Yaminjeongeum users to understand the origin and context when using these words.

“The specific internet community’s political views and violence are hidden under (some of) these Yaminjeongeum words,” said Oh Young-jin, a culture critic who teaches literary criticism at Hanyang Univesity.

“Some Yaminjeongeum words were apparently made to alienate and deride others, especially those made in Yagu Gallery. People need to know that when using the words,” he told the Korea Herald. 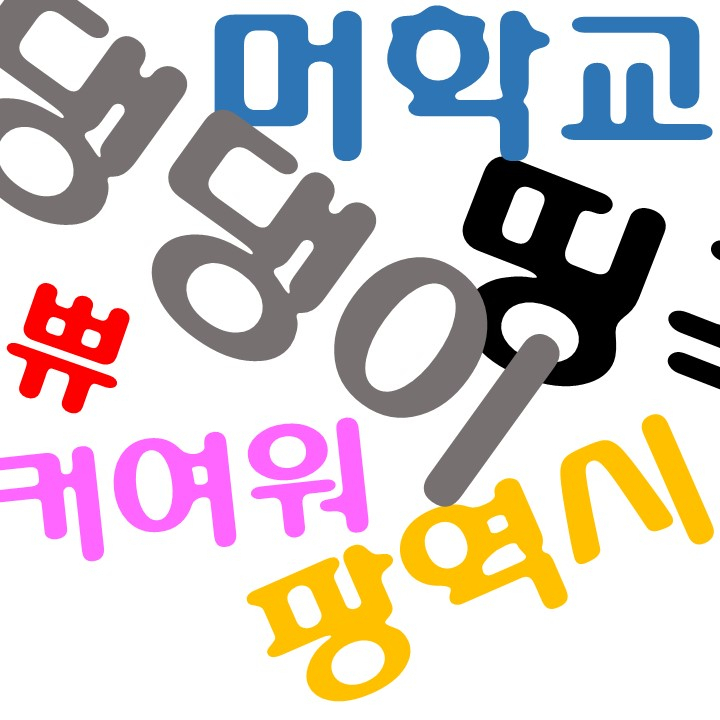 Widespread use in South Korean society

A survey of 1,000 South Koreans by Hankook Research in 2020 shows how prevalent this type of wordplay is among younger Koreans. About 63 percent of those between 18 and 29 answered that they have used Yaminjeongeum and 34 percent of those in their 30s answered the same in the survey.

The Korean language institute was not the only government branch that used manipulated words. Korea Tourism Organization, a subordinate of South Korea’s cultural ministry, used the word "Daengdaeng trip" in its promotion for travel programs with pet dogs.

The meme also appeared in businesses.

South Korean food maker HY rolled out the limited edition of its flagship spicy cold ramyeon, Paldo Bibimmyeon (팔도 비빔면) by changing its name as Gwaldo Nenemttin (괄도 네넴띤) in 2019 and was a huge success, selling out all 5 million units in a month.

K-pop girl group A-pink also dropped a song titled “%%” which looks similar to a Korean expression of agreement “Eung Eung" (응응) in the same year, appealing to younger listeners used to such wordplay.

As well as Daengdaengi or Keoyeowo, many manipulated Korean words are used for just fun by the public, referring to something favorable or emotional.

“Not all Yaminjeongeum words are generated for hate," said Oh. "We need not stigmatize it, but instead deprive haters of their slang so that they cannot feel a sense of belonging with it."