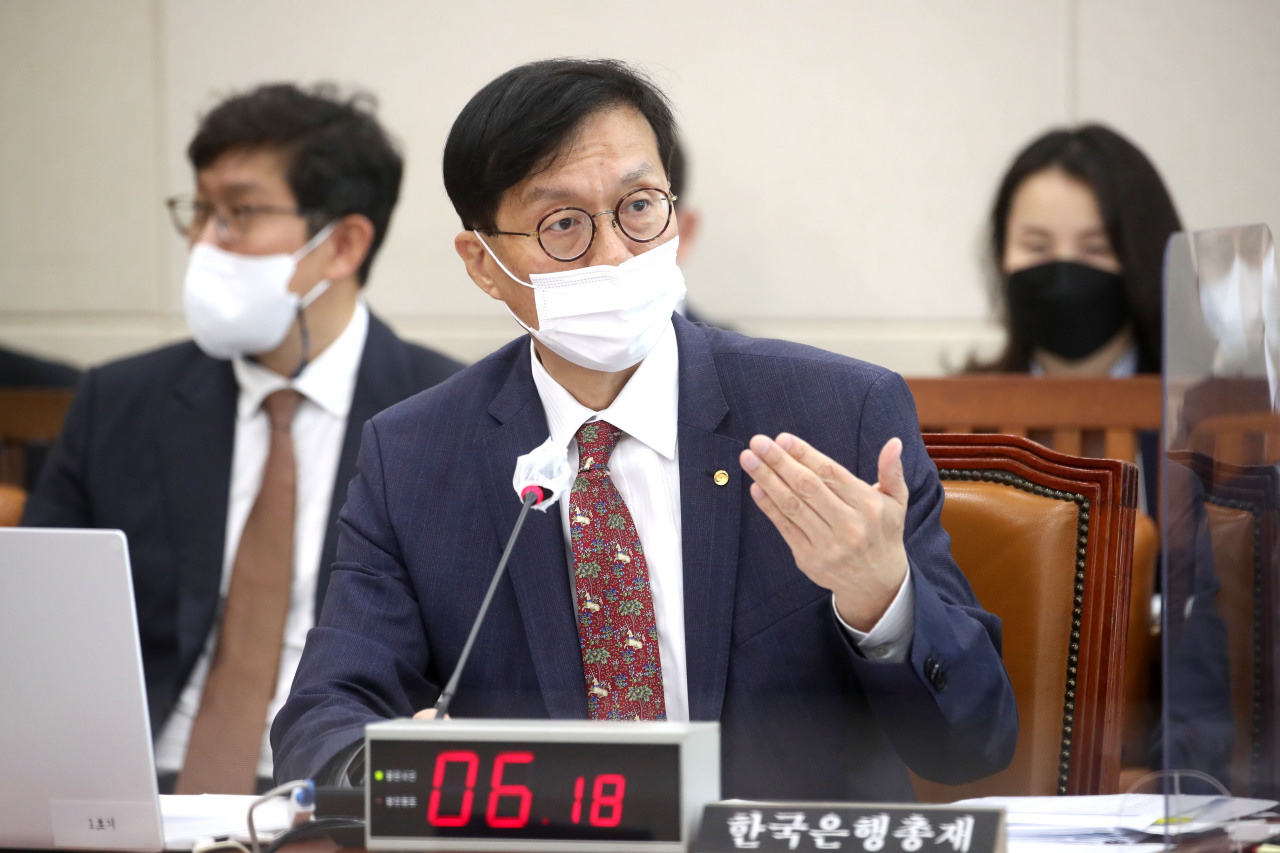 BOK Gov. Rhee Chang-yong speaks during a parliamentary audit held at the National Assembly in Seoul on Friday. (Yonhap)
The chief of South Korea’s central bank hinted at more rate hikes to come on Friday to combat high inflation, while stressing that the possible currency swap deal with the US is only a short-term solution.

“We believe that we need to maintain our stance to raise rates going forward in order to prevent entering a stagnant state of high inflation,” Bank of Korea Gov. Rhee Chang-yong told lawmakers during a parliamentary audit.

“The BOK has so far carried out a series of seven rate hikes worth a combined 2 percentage points since August last year. From now on, we will decide the size and the timeframe of the rate hike considering how external factors such as the monetary policy stance of other major economies and geopolitical risks affect our country’s inflation, growth and the finance market, including forex,” he added.

Rhee’s remark comes amid growing concerns of high inflation weighing on consumer spending and the sharply falling price of the local currency won against the US dollar affecting the nation’s exports, which takes up some half of the economy.

Korea’s consumer prices, a yardstick for inflation, gained 5.6 percent on-year in September, slightly slowing from a 5.7 percent rise the previous month. The brake was put in place due to slowing price growth of crude oil and other external factors, but experts said it could quickly regain the speed, fueled by volatility in oil and energy price.

On ongoing talks of a currency swap deal with the US, Rhee said that “it will have a calming effect for the economic subjects, but is difficult for it to stabilize the forex market in long-term.”

Korea’s financial authorities are “exchanging information with the US Federal Reserve” on the matter and the US Fed “will make a comprehensive decision on the currency swap partnership,” Rhee told lawmakers. He added that in order to ink such partnership with the US, a shrink in global dollar liquidity must be observed.

The won was trading around 1,400 won against the US greenback at around 5 p.m. on Friday. The country’s foreign reserves as of end-September saw the sharpest on-month decline since 2008, shedding $19.6 billion on-month. This reflects the sharply declining value of won against the dollar, experts say.

BOK is scheduled to hold a rate-setting meeting Wednesday, the first of the two remaining gatherings of the monetary policy board for this year.