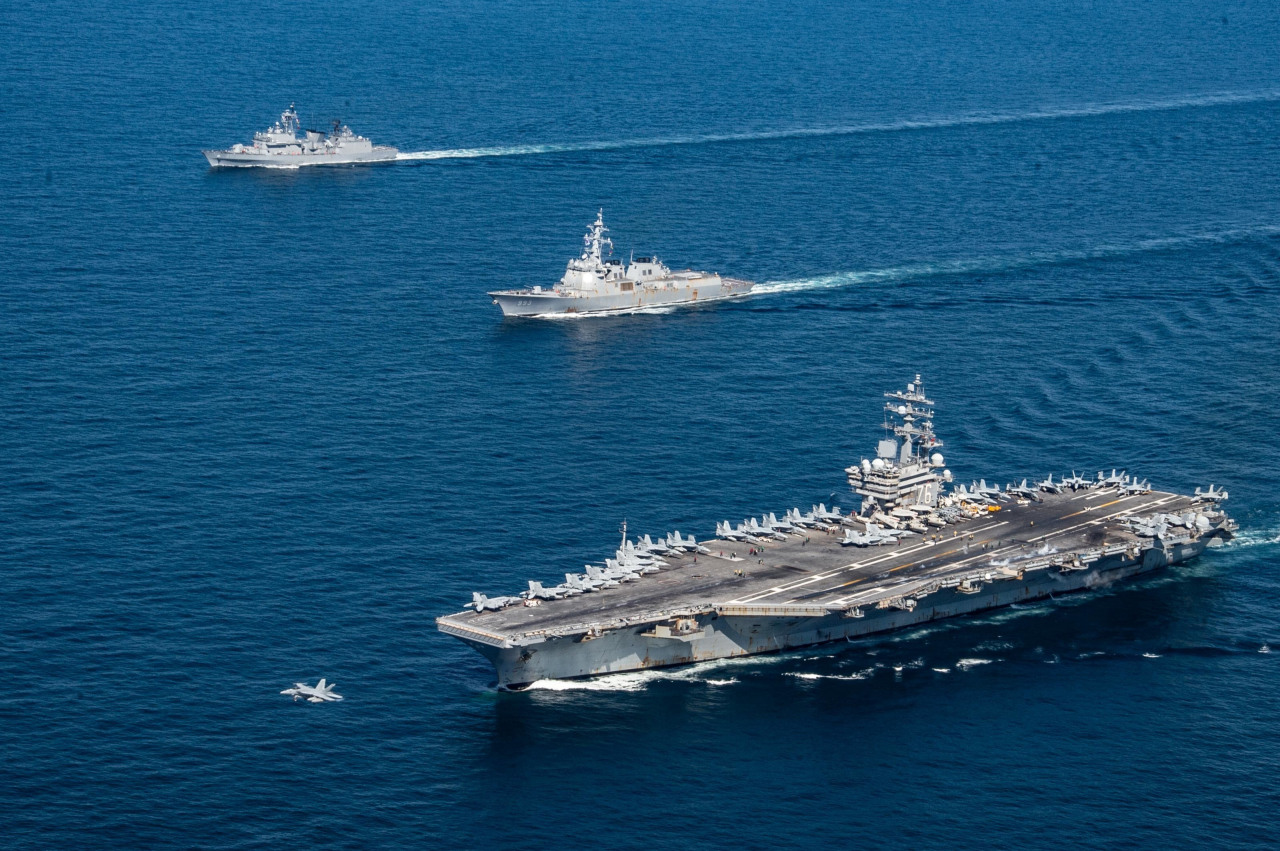 An F/A-18E Super Hornet launches from the flight deck of the U.S. Navy’s only forward-deployed aircraft carrier, USS Ronald Reagan (CVN 76), as it steams in formation with ROKS Seoae Ryu Seong-ryong (DDG 993) and ROKS Gwanggaeto the Great (DDH 971), in waters east of the Korean Peninsula, Sept. 29. (File Photo - US Navy)
South Korea and the United States on Friday began another round of large-scale naval drills, including a redeployed US aircraft carrier, in waters off the Korean Peninsula as the allies vow to take tit-for-tat military actions against North Korean provocations.

The two-day bilateral maneuvering exercises have been staged in international waters of the East Sea to “strengthen combined defense capabilities,” South Korea’s Joint Chiefs of Staff announced on Friday morning.

The US nuclear-powered aircraft carrier USS Ronald Reagan and its strike group, who have been repositioned near the Korean Peninsula are participating in the drills. Ticonderoga-class guided-missile cruiser USS Chancellorsville, Arleigh Burke-class destroyer USS Barry and Arleigh Burke-class guided-missile destroyer USS Benfold have been mobilized.

The maneuvering exercises include training to escort the USS Ronald Reagan down to waters southeast of the island of Jeju, according to the JCS.

The bilateral exercises involving the redeployed USS Ronald Reagan would enable South Korea and the US to strengthen “their firm operational capabilities and readiness to respond to any kind of North Korean provocations,” the JCS said

The USS Ronald Reagan Carrier Strike Group has been repositioned in the international waters of South Korea’s East Sea as of Wednesday, a day after North Korea fired a suspected intermediate-range ballistic missile that traveled around 4,500 kilometers and overflew Japan.

The USS Ronald Reagan and its strike group have publicly engaged in a total of four bilateral and trilateral naval drills for around two weeks from Sep. 26 through Saturday.

The navy forces on Wednesday staged a ballistic missile defense exercise that aims to improve interoperability and coordination among participants in detecting, tracking and intercepting ballistic targets.

The South Korean and US navy forces conducted four days of combined maritime exercises with the USS Ronald Reagan Carrier Strike Group in the East Sea on Sep. 29. The following day, a trilateral anti-submarine warfare exercise was conducted in the international waters of the East Sea, which is was first of its kind since 2017.

North Korea has fired a series of ballistic missiles eastward since Sep. 25, two days after the USS Ronald Reagan entered a naval base in the port city of Busan for the first time since 2017.

North Korea fired a total of 10 ballistic missiles in six discrete launches over 12 days until Thursday.

In the wake of North Korea’s spate of ballistic missile launches in unusually short intervals, South Korean and the US defense leaders publicly and repeatedly reaffirmed the allies’ commitment to taking tit-for-tat military actions against North Korea’s provocation.

Lee and Aquilino shared the allies’ common understanding that the “more provocations North Korea makes, the stronger the alliance's military response will be.”

Lee and US Secretary of Defense Lloyd Austin reaffirmed the allies’ commitment during their phone call on Tuesday.

In response to North Korea’s IRBM launch on Tuesday, South Korea and the US staged a “precision bombing drill” and joint tactical missile live-fire exercise respective on Tuesday and Wednesday.

The US State Department on Thursday also underscored that the US continues to “have a number of tools available in our toolbelt to hold the DPRK accountable – both through US government efforts, but also continuing to work through our multilateral institutions as well.”

The South Korean defense minister on Friday held a meeting of top commanders as the military braces for the possibility of North Korea making further provocations.

During the meeting, Lee underscored the importance of “sending a clear message that North Korea’s nuclear and missile development will only cause troubles for the country by demonstrating the powerful combined response capabilities of South Korea and the US in response to North Korea’s recent series of provocations.”

Lee also underscored that the South Korean military “cannot overlook the possibility of North Korea making tactical provocations with a cunning strategy,” referring to surprise local provocations. The defense chief urged the military to reinforce its readiness posture so that it can immediately react in case of contingencies.

In a press statement, North Korea’s Foreign Ministry on Thursday also claimed that the recent missile launches are the “just counteraction measures” against the South Korea-US bilateral naval exercises from Sept. 26-29, warning of consequences for the redeployment of the USS Ronald Reagan.

But North Korea’s Foreign Ministry said the country is keeping close tabs on the US move to pose a “serious threat to the stability of the situation on the Korean Peninsula and in its vicinity” by repositioning the strike carrier group in waters off the peninsula.